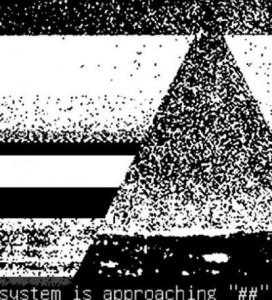 This week I had the pleasure of speaking with Jon Cates and Shane Mecklenburger about their CAA panel, Approaching Systems, sponsored by the New Media Caucus and taking place on Wednesday morning. (9:30 AM—12:00 PM, Hilton Chicago, 2nd Floor, International South, 720 South Michigan Avenue.) Check out the website, CAA session page, & Facebook event for more.

I, along with my InterArts colleague Grayson Bagwell, got to ask them some questions about systems aesthetics and tomorrow’s panel, and I’ve compiled some highlights from their answers below. Click the “Read More” link below (if you’re viewing from the main page) to gain knowledge about things both invisible and visible.

Shane Mecklenburger:   The title of the panel, APPROACHING SYSTEMS, came to me a few years ago as a riff on my fellow panel chair Jon Cates’ internet domain, which is systemsapproach.net. I had for a while been thinking about that domain and what it might mean, and what a systems approach might be. I had some conversations with Jon about it, and it was something that was very open, but inspired by Jack Burnham’s essay Systems Esthetics, which I had also been reading. A couple of years ago Jon posted a photo of a very dark and foreboding storm cloud, and I just sort of off-handedly commented “systems approach!” It was a joke, a twist on his domain, but then the more I thought about it, it wouldn’t leave me alone, this idea of responding to the inevitable, unavoidable approach of systems.

Jon Cates:   I was informed and inspired by Jack Burnham early on, in the late 1990s and early 2000s, by this concept of the systems approach being a way to approach Digital Culture as an artist. For me what that means is a taking the digital seriously, recognizing digital culture and the internet etc. as cultural.

SM:   Thinking about how we respond to the inevitable approach of systems in our lives in many different kinds of ways, became a lens through which i was thinking about practices that are interesting to me. It seemed to be a way of talking about a lot of things that were important to a lot of different kinds of practitioners, so I said to Jon hey, let’s do a panel and call it approaching systems.

I should say before I get too much further that I’m certainly not the expert on Jack Burnham or the critical writing around it by any means, I’m an artist, and I was actually really interested in bringing together people who were experts, in many ways so that I could learn about it, but— Edward Shanken is certainly an expert. Ed Shanken’s writing about Burnham has been really useful to me. He wrote an essay called “The House That Jack Built”. There’s also Luke Skrebowski’s 2006 “All Systems Go: Recovering Jack Burnham’s ‘Systems Aesthetics’.”

To get up to speed on the topic, I would say absolutely start with Systems Esthetics. Then if you want to go further, I would read the Shanken essay, and then the next thing that I would read the recent Art Forum piece on Burnham’s work. There were basically two responses to the Art Forum piece. One was “wow, this is so interesting, I had never heard of Jack Burnham, what’s this?” And another response from people who were very familiar with Burnham’s work was to be pleased that he was getting the attention, but also that the recent Art Forum work did not really demonstrate how people actually had been interested in and writing about his work for so long, so it was kind of as if Jack Burnham had just been discovered again, which wasn’t really the case, because many people have written a lot. There’s been a resurgence of interest in his work recently for a lot of different reasons, that article was one example but i think everyone agrees that it definitely didn’t receive the kind of attention that it deserved when it was published, and since then, and only now is really starting to.

But the panel isn’t only confined to Burnham’s work and analysis of it. Two of the panelists are especially interested in taking another look at the application of what he wrote, and then the other panelists are going to be talking about other works, either their own or other historical works related to games. Games as art and art as games is another topic of the panel, and how that is an example as an existing and functioning systems aesthetic and approach to systems. Art is a system, and a game is by necessity a system. There has been historically a lot of overlap between those two systems.

JC:   Alexander R. Galloway’s book Gaming: Essays On Algorithmic Culture from 2006 was also a starting place for us in organizing this panel, as we wanted to bring games, Art Games, Indy Games, etc into the seriousness of the CAA discussion. This quote is a reference point for us: “Artists should create new grammars of action, not simply new grammars of visuality. They should create alternative algorithms. They should reinvent the architectural flow of play and the game’s position in the world, not just its maps …”

Can you give some examples of the sort of art games that interest you?

JC:   A few classics are: JODI’s Untitled Game series, The Graveyard by Tale of Tales, WACO RESURRECTION by C-LEVEL and Natalie Bookchin’s The Intruder. A few of these are covered by Galloway in his book.

Can you describe the process of you two putting together this panel?

JC:   So Shane and I know each other in a number of different ways. He was my student when he studied in my department, FVNMA @ SAIC, the department I now Chair, but we are also both on the editorial board of Moebius Journal, so we are familiar with these types of processes, reviewing papers for publication, etc.

SM:   We had people in mind for who we might invite, but we wanted to see what we got in response to our open call, and we were really pleased to receive a huge amount of excellent submissions, from people who we were familiar with, and also from people we had never met. And so Eddo Stern was the one person who we invited, and the rest submitted to the open call and their work just jumped out at us.

JC:   And then we created various possible panel configurations until we hit the right combination of topics. We did approach it curatorially, with the idea of dynamic balance guiding us.

Can you talk a little bit about each of the panelists?

SM:   Melissa Ragain takes a really close look at the work of Burnham specifically and situates it art historically in relation to a lot of different art historical discourses. She is an art historian examining systems aesthetics and Burnham’s work in general, in relation to Formalism. I think she gives a really nuanced view of the way that his work has been interpreted and positioned, and offers a really interesting and unique perspective.

What Philip Galanter does is specifically look at systems aesthetics in relation to post-modernism and makes a case for, in my interpretation, how what Burnham was presenting easily could have been another description of contemporary art at the time, that was as applicable (or more so) to describe what was happening in contemporary art as post-modernism.

Tina Rivers is doing an art historical analysis, focused on Tony Martin’s Game Room. Game Room was a one man show that Martin did in 1968, right around the time when Burnham was writing, and that’s an artwork that takes the form of a game.

So what does a systems approach mean for you in engaging with art?

JC:   In some ways a systems approach is a way of moving towards processes (as an artist) rather than objects. I like what No Art (The Journal of Objectless Art) is doing in this regard.

Systems historically have a cultural legacy of utilitarianism, and I think that’s true in general of things that are related to technology, but that isn’t necessary. One of the things that I find really interesting about artists who work with technology, and people who think about technology in relation to aesthetics, is that is frees it from that utilitarian legacy. This allows it to be all kinds of things that may actually not be useful in a traditional sense, but may be very useful in a cultural sense—that of allowing us to think differently about these things that we take for granted: technology and systems and these things that are oftentimes totally invisible and obscured.

What are your goals in relation to this panel?

JC:   I developed a Media Art Histories course called Art Game Studies at SAIC in 2010 and have taught it a number of times (Jake Elliott is teaching it now, and Chaz Evans will teach it next year). Shane is teaching a course called Approaching Systems now, and so we are involved in developing curriculum around these issues. We want to bring this conversation to the context of CAA, to bring critical art academic and scholarly attention to games as art and systems as art, especially in the context of New Media Art but also more widely at CAA.

So this panel is in part an effort to bring academic and pedagogical attentions to artistic practices that are kind of marginalized?

JC:   I’d say that they are more are more being brought into CAA and Contemporary Art worlds all the time, but how they are brought in, how these practices are contextualized, is always a question.

SM:   I hope it both continues and spurs on an existing conversation that’s going on about all of these things, and also sparks a new conversation. One of the things about this that for me is really exciting is that this is not just a new media conversation. This is a much broader one, that I think is really relevant for art historians, critics, and artists who don’t necessarily work with new media.I feel like these questions and the issues that are being engaged with about the approach of systems and the aesthetics of games are actually really relevant for anybody.

This week I had the pleasure of speaking with Jon Cates and Shane Mecklenburger about their CAA panel, Approaching Systems, sponsored by the New Media Caucus and taking place on …