<![endif]--> The M Words: Thoughts on Motherhood and Masculinity in CAA’s feminism | Columbia at CAA

During the Feminist Art Project’s series of panels themed “The M Word: Motherhood and Representation,” panelists discussed issues of maternity, the maternal body, and motherhood in art and for practicing artists. Amidst the radical reclamation of arts and family life, lactative performance art, images of the devouring Mother popularized by Disney, etc., Miriam Schaer presented her work on the stigma of women without children. While this might seem inconsistent with the theme, Schaer mentions that these seemingly contrasting states of motherhood/childlessness are illusory distractions from the larger issues at hand including how women’s bodies understood/evaluated, issues of external validation, procreation, and what it means to be a child as well as a mother.

The Feminist Art Project used the complicated issue of maternity to problematize how those who are parents, those who are not, and those in between can unite under a common but diverse feminist agenda. It revisits the crucial and continual question of how to challenge oppression in the face of a multitude of diverse and different realities. After all, arbitrary and reductive understandings of “womanhood” and “feminism” have only ever been exclusions and harmful to a vision of social justice.

Within the context of expanding the context and conversation of feminism, Thomas F. Folland and Leta Y. Ming co-chaired the panel “Refiguring Masculinities in Conceptual Art,” a feminist examination masculinity in the conceptual art of the 1960s and 1970s.  Many of the artists discussed were involved either directly or peripherally with second wave feminism, and the panelists ask in what ways these artists interrogate (or fail to interrogate) the premises of gender, masculinity, and its place as a social or artistic concept.

In her paper, “Sol LeWitt’s Absent Body,” Kirsten Swenson proposes that perhaps we can read Sol LeWitt’s factory fabrication and surrogacy as a performance of anti-heroic, clerk-like labor that rejects the famous, glorious, masculine body dubbed the “Pollockian performative” by Amelia Jones. 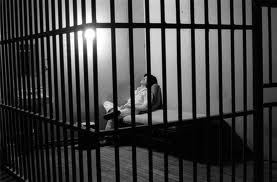 “One Year Performance” by Tehching Hseih. Photo courtesy of moma.org.

In a similar turn to a different vision of the performative body, Karen Gonzalez Rice of Conneticuit College questions how male endurance artists Wolfgang Stoerchle, Houston Conwill, and Tehching Hseih complicate their performances of masculinity through the trope of the warrior monk. These artists use discipline, order, repetition in a way that emulates a real and fictionalized monastic warrior figure whose popularity escalated in the United States in the 1970s. She argues that the warrior monk’s commitment to ethics and discipline, rather than the state, allows a vision of masculinity that can incorporate moral sensitivity, ethical dissent, and a vulnerability to impotence and failure that are not associated with the paradigms of western masculinity. 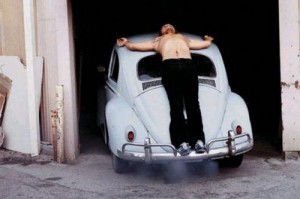 Jillian St. Jaques elaborates on the theme of vulnerability in his paper, “Nail Me To A Car! Spill My Seed On The Floor!” He questions whether critical receptions of Vito Acconci’s “Seed Bed” and Chris Burden’s “Transfixed” have been radical inso far as most understandings of vulnerability in their work are predicated on enduring pain, conquering rather than responding to potential harm, and machoism. Talking about this vision of vulnerability in these pieces as radical or unusual might, in fact, argue St. Jacques, overlook the vicissitudes of how these works deploy vulnerability and why.

It is very easy for me to react with immediate cynicism about another analysis of roles of men in the art world because the history of privileging western male voices above all others has been extensive and traumatic. But this panel does not treat men as the definitive voices of a movement or the most important people within a dialogue. Rather, it places these artists within a history of a contestation of paradigms of patriarchal power and asks how contentions of western gender and social space might also come through an interrogation of masculinity.

The M Words: Thoughts on Motherhood and Masculinity in CAA’s feminism

During the Feminist Art Project’s series of panels themed “The M Word: Motherhood and Representation,” panelists discussed issues of maternity, the maternal body, and motherhood in art and for practicing …