At some point during the conference I’d gotten a little flack on twitter for the perceived triviality of a post of mine, and so I responded by asking for suggestions of meatier topics. I got this response: 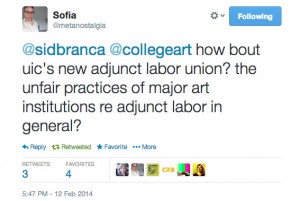 While I’m a gal who generally tries to draw attention to the elephant in the room, this is a topic I didn’t really feel I could speak to, at least experientially. I’m still a student in graduate school, not really intending to look for a full-time faculty position upon graduating and simply eyeing adjunct teaching as one of several future possibilities, as an artist without a family to support and a high tolerance for financial instability. When I worked as a university administrator elsewhere, it was in an academic department with relatively few adjuncts (considering graduate student teaching a separate though related issue). I’m woefully undereducated on the topic, knowing little beyond that it’s a bad scene, an exploitative system that hurts students and faculty. However, I could not in good conscience let this solicitation go ignored.

END_OF_DOCUMENT_TOKEN_TO_BE_REPLACED

At some point during the conference I’d gotten a little flack on twitter for the perceived triviality of a post of mine, and so I responded by asking for suggestions … 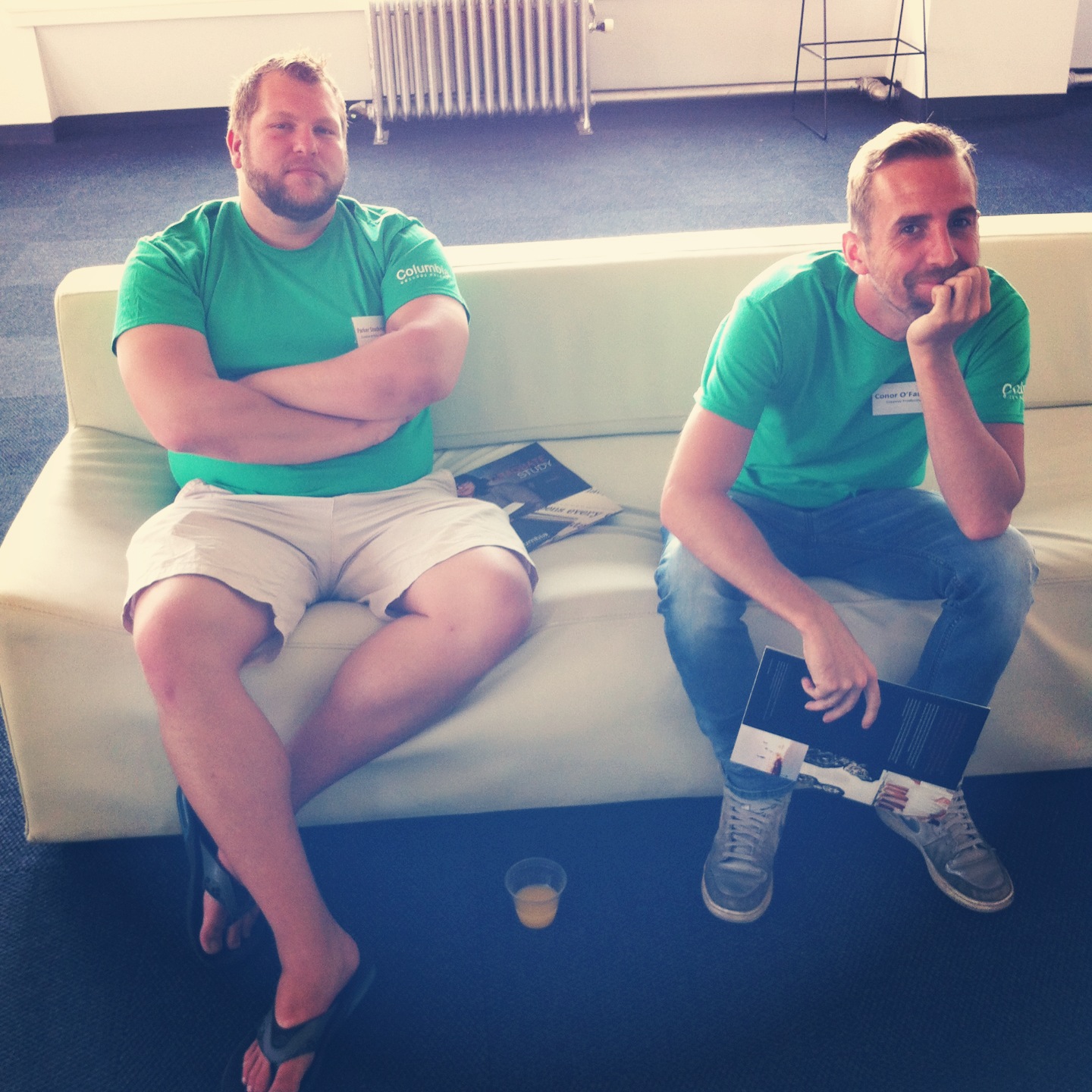 For Day 2 of my CAA experience, I’m working at the Columbia College Graduate Admissions booth at the book fair. I’m stoked and totally prepared for questions like, “Are the kids in grad school cool?” “Do you learn a lot?” “Does grad school prepare you for the real world?” “Will you be rich, famous, or both after you finish?” But for the first hour, only two folks come by. “Can I have this pen?” a woman asks. The second is a tweed-vested middle-age dude with a goatee who walks up and is all, “let me fire this one at you.” (Okay.) “Is Columbia College Chicago related to Columbia University?” I look at him for a second. “I know two guys named Mike,” I tell him. “Do you think they’re related?” Well, I wish I’d actually thought of that, but I haven’t had my third cup of coffee yet. And also I have to say, they are pretty cool pens.

END_OF_DOCUMENT_TOKEN_TO_BE_REPLACED

For Day 2 of my CAA experience, I’m working at the Columbia College Graduate Admissions booth at the book fair. I’m stoked and totally prepared for questions like, “Are … 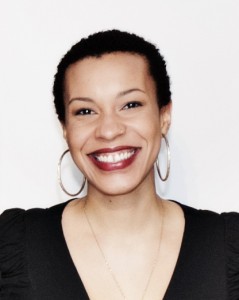 Rashayla Marie Brown is an interdisciplinary artist, writer and curator who also leads the Multicultural Affairs department at the School of the Art Institute in her role as Assistant Director. Her work, both as an artist and administrator, primarily negotiates race, sexuality, spirituality, politics, and popular culture in the formation of subversive narratives. She has been awarded numerous fellowships and grants, including the Anna Louise Raymond BFA Fellowship, Chicago Artist Coalition’s BOLT Residency, SAIC’s Archibald Motley Grant, and the Propeller Fund. She holds a BA in Sociology and African-American Studies from Yale University and a BFA in Photography and Video from the School of the Art Institute of Chicago.

La Keisha Leek: What is an Intersectionality Critique and where did the idea to create this at SAIC come from?

Rashayla Marie Brown: An Intersectionality Critique is a safe, open, and engaging environment for discussing art across disciplines, identities, and with students and alumni from several universities and departments. Students are encouraged to share works in progress and consider how cultural topics such as race, class, gender, and politics intersect with each other and are inseparable from art. The term “Intersectionality” is used in tribute to black feminist writers such as Kimberlé Crenshaw and Patricia Hill Collins who proposed how various categories of identity interact on multiple and simultaneous levels. By talking with students of differing disciplines and schools that they might never normally interact with, students learn to integrate concepts of inclusion and awareness into their broader educational experience and post-graduate lives.  I designed this program with social practice techniques of community outreach and collaboration to enhance the development of academic success and skills of cultural competency.

SAIC is an interdisciplinary school in that there are no majors; however, students still need formal outlets for having their work critiqued by those who may have additional knowledge in other fields outside the 2-3 departments where they focus their work. Opening the notion of diversity to interdisciplinary education fosters equity and inclusion of differing voices. I think it’s important for students to discover significant ideas such as critical race theory, feminism, and queer theory in practice and in dialogue on appropriation, collectivism, surrealism, and the like. Through this model of an educational social practice, students are invited to have productive conversations around identity and difference through a creative lens they have an interest in as artists and scholars.

LL: Why do you feel that now was the right moment for this initiative to exist?

RMB: There is no prevailing method of critical arts engagement conducive to the building of inclusion and awareness of diversity issues. In the past few years, SAIC has implemented a diversity initiative, and through student forums I’ve found that even students who focus in several disciplines sometimes become siloed in their departments and seek alternative means to have their work critiqued and in consideration of both their identity and the work’s formal qualities. A design critique is different from a photography critique which is different from a painting critique, yet all these fields are intimately linked to each other, just as race, class and gender operate in tandem. The MFA students at our school get this type of critique during inter-departmental “Critique Weeks” at SAIC, but those environments are at times combative or non-productive for the artist because there is no sense of community or support. Also, the same students tend to gravitate towards diversity-themed courses, which leaves a large population of our students unexposed to them and the powerful ideas they put forth. I personally saw quite a bit of work produced by advanced level students that had clearly not considered how society functions in relation to art, so the need was there.

LL: Who have you engaged in the initiative so far?

RMB: I have engaged D. Denenge Akpem, Delinda Collier, Lisa Vinebaum, Daniel Tucker, Cheryl Pope, Maria Gaspar, and Nicole Marroquin, Theaster Gates and Hamza Walker. We are also looking for faculty and artists who work with gender, sexuality and faith to lead as well. We have had students from UIC, Columbia College, and even visitors from University of Iowa and RISD participate along with our students at SAIC from almost every department, from the first-year undergrad to the grad level. Rashayla Maria Brown with Theaster Gates and Hamza Walker at Critique on the theme of Sustainability.

LL: What has been the response from those who have been a part of the Critiques in some capacity?

RMB: The most powerful response was that this was the first time some students have discussed work and felt like it was not a defense, but more like sharing in that they didn’t feel afraid to share some very heavy and in-progress ideas. They felt freer to explore and have a dialogue, because a sense of respect and collaboration was there. Also, they met people that they would have never encountered otherwise and made new connections that they hope will grow into artistic partnerships. Lastly, they learned about a topic that they were interested in but afraid to explore due to lack of knowledge or fear. 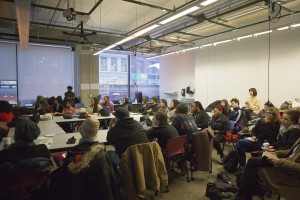 LL: As a practicing artist why did you feel it was important to work within education?

RMB: When I started as an artist, I felt very alone and unsure that my type of art, the kind that critically engaged my identity and cultural theory, was valued and appreciated. That feeling often directly relates to one’s success – if you don’t have role models or peers to safely share ideas with, you might take much too long to explore and articulate your ideas. As a student at SAIC, I re-started the group Black at SAIC to fill this gap for myself. After participating in open critiques and shows with friends from this group, I realized that if it weren’t for them I probably would not have thrived the way I did. I wanted no one to have to go through that experience on their own, for them to know there is strength in community. The canonized art world is immensely segregated and tends to gravitate towards safe artworks that don’t challenge existing paradigms of power. Since art schools are where the art fair, the museum, and the gallery often go to look for new talent, I thought that real change could start in the realm of education and the art students themselves.

LL: What exhibitions or programs going on during CAA would you recommend to conference attendees?

Rashayla Marie Brown is an interdisciplinary artist, writer and curator who also leads the Multicultural Affairs department at the School of the Art Institute in her role as Assistant …

Where will you find an innovative design firm with it’s own gallery program and exhibition space during this week’s West Loop Gallery Walk? Look no further.

I recently had a privileged dialogue with Cloudster Jennifer Choi of Design Cloud where she clued me in to bigger picture at the Cloud. Keep up with this unique group of creatives, I have a suspicion that they may be on to something. 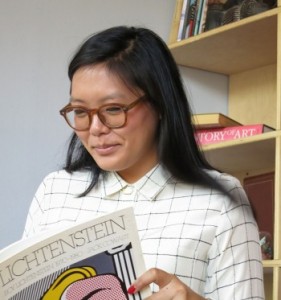 We use our offices as a case study illustrating an orchestrated experience or environment; through artwork, a community of creatives, and focused programming. Our continually evolving portfolio sets us apart.

END_OF_DOCUMENT_TOKEN_TO_BE_REPLACED

On High: Design Cloud in the West Loop

Where will you find an innovative design firm with it’s own gallery program and exhibition space during this week’s West Loop Gallery Walk? Look no further. I recently had a …