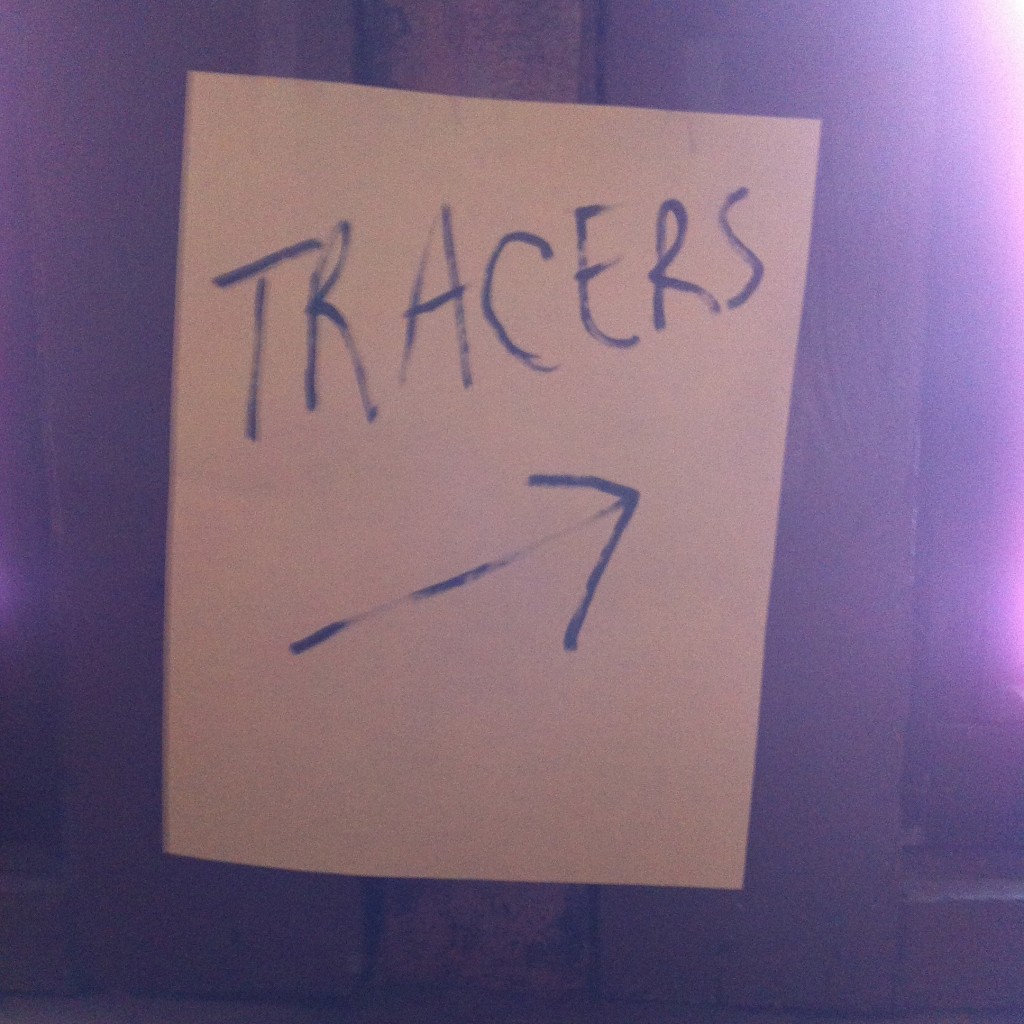 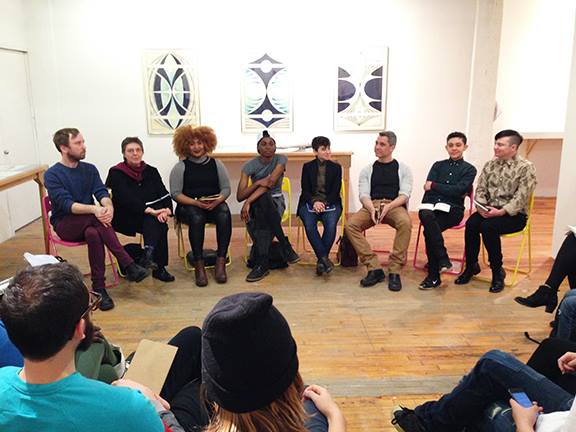 Latham opened the discussion on Friday with a question of considering academic feminism and its differences from real, lived experience. Although this binary of theory and praxis is an attendant concern for nearly all frameworks of dismantling oppressive systems, Audre Lorde, for example, resists total subscription to this kind of absolute binary. I really like what Nancy Bereano writes in the intro to Lorde’s Sister Outsider: “The white western patriarchal ordering of things requires that we believe there is an inherent conflict between what we feel and what we think[, that] We are easier to control when one part of our selves is split from another, fragmented, off balance. [It] is the work of feminism to make connections, to heal unnecessary divisions.”

Bereano charges feminism with the responsibility of breaking down walls and, instead, to allow for more connection and inclusivity. But what do these feminisms look like? This is the conversation opened up by Tracers.

Latham and the panelists had such a wonderfully-charged and exigent conversation about these issues, and Latham has been gracious enough to share some of his own thoughts on LGBTIQ + feminism. 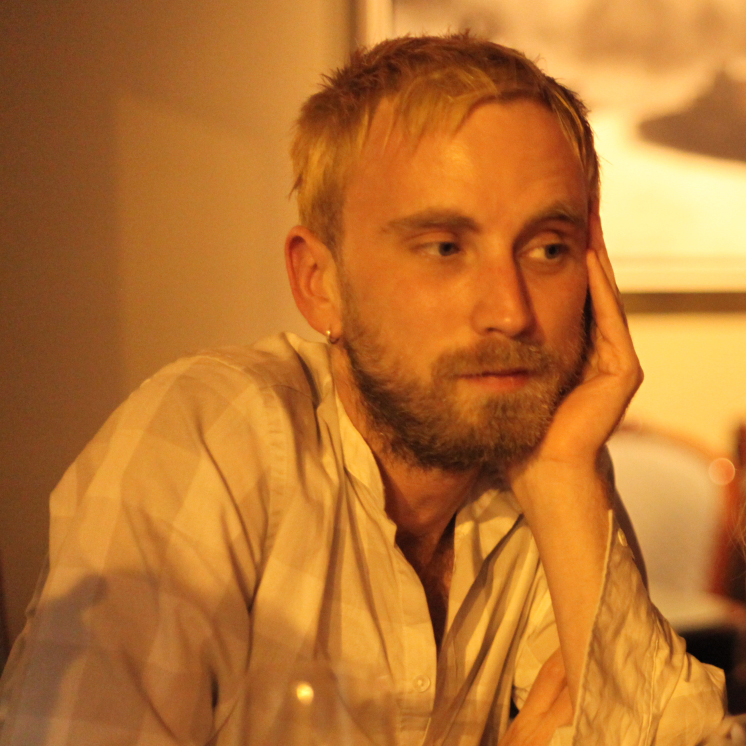 Daniel: First, Latham, please tell us a bit about you and your involvement with the panel. I know, too, that you’re an organizer of Chances Dances. What is Chances Dances, and what role does it have in the LGTBIQ Chicago community?

Latham Zearfoss: Chances is a collectively run group of inclusive queer dance parties in Chicago. We aim to make a temporary utopian space of togetherness across difference. We also use a portion of the money we generate to administer a biannual grant for queer artists and queer feminine spectrum artists of color working in Chicago.

LZ: I came to feminism because I was, and still am, a feminine man. The majority of my good friends growing up were girls. I was constantly harassed for being read as gay, but I believe I was bullied more for my mannerisms than my speculated sexuality. I found a deep kinship with witchy, slutty, fat, weirdo girls who were really good at protecting themselves—out of necessity. I learned a lot from them but also saw the sh*t they suffered through on a daily basis—constantly devalued for myriad reasons. We all failed at our gender roles, spectacularly. This was how I started to articulate a feminist politic even before I knew what to call it. Feminism is an embrace of the weak, the sensitive, the resilient, the emotional, the disempowered and the oppressed. And more literally, it is the lifting up of all that can be claimed as feminine—from faggotry to world peace to sex workers.

DSP: I’m interested in how there’s so much more language now for LGBTIQ discourse. (How) do you think language can be libratory in providing vocabulary and access, on the one hand, but how it fails in the sense that, while attempting to liberate, it actually reinforces the boxes we’re trying to do away with, on the other?

LZ: I think it’s very helpful to think of language as open-source, as under construction and always evolving. Language is still codified by culture, which comes from class and race and education and so on. So it can be divisive—or a least a marker of pre-existing divisions. I am an artist, and I always think about how art-making functions best when it opens up a conversation that language—as in text—cannot fully support. Music does this very well, I think. And poetry gets there too; to the cracks of language and words as signifiers. Even puns! We have all these clues that tell us everyday that language is failing us in ways that are beautiful or absurd or horrible. We just have to listen to that lesson and remember it when we start to name ourselves and others and make categories. But I think categories are useful. For LGBTIQ folks and for feminists, we identify with these things because when we do, we are no longer alone. We enter into a union of sorts. We are a part of a long lineage and BELONG to something bigger than ourselves, but that is outside of normativity.

DSP: I was really struck by Jillian’s comment about MichFest: “This is amazing. This is so f***ed up.” What steps is feminism taking to create a consciousness of difference, and how can this be inclusive?

LZ: It depends. I think that many trans* feminists and feminists of color in this country are bringing the conversation up to date. In turn, they are expanding the political scope of feminism and the nature of its contemporary concerns. It’s about time. Historically, these voices have been left out or openly excluded from feminist events and conversations. Feminism can no longer survive if it remains purely a politic for white heterosexual cisgender women. Not only that, but feminism needs to house a respectful exchange of culture amongst its practitioners. This is how creative problem-solving can be shared, ideas and solutions that stem from a variety of cultural and economic configurations will help feminists across differences to better serve their communities and themselves. Its not only morally correct, its entirely practical as well.

DSP: Melissa Potter, in the Interdisciplinary Book and Paper Arts Program at Columbia College, just wrote a post about the sexist microaggressions she experienced at CAA, and her post recalled for me a question you brought up about the needs and problematics of female-only spaces. I’ll just quote your question here, because I think you phrase it best: “What can queerness and LGBTIQ struggles contribute to the dialogue around female-only spaces in feminist circles and vice versa?”

LZ: I’m not sure if I can fully weigh in on this as I’ve never walked through the world as female-presenting. But I do hear from friends who are people of color and women that they still find a lot of healing from spaces that are POC or women only. The problem is that these spaces—and queer and feminist spaces as well—can be policed in a way that is damaging on an individual level, as in the Michigan Womyn’s Music Festival denying transwomen entry. It can be deeply problematic. That said, the microaggressions that Potter speaks of are serious and real and sometimes all you want is a group of peers who hear your words and respect your presence on this planet without question. I expect that female-only spaces will be needed until patriarchy ends and something else takes its place…

DSP: How are LBGTIQ and feminism represented or contextualized in art / the art world? What role does art, as a practice, play for both feminism and the LBGTIQ community?

LZ: Right now, queerness is very “hot” in the art world. On one hand that allows for a fair amount of creative and financially beneficial opportunities for those of us who have been working on the margins. On the other hand, that can quickly devolve into cultural tourism and a spectacular form of otherness. Feminism has a deeper conversation in the art world and has lived through its own tokenization and come out on the other end of it, still relevant and still making strides. So I am hopeful that queerness and queer ideas and gazes can continue to penetrate cultural production within and without the institutions.

BIO:
Latham Zearfoss is an artist and cultural producer living and working in Chicago. His artwork often centers on reclaiming historical and mythological texts, and revising them to incorporate radical notions of love and sex, possibility and probability. His commitment to art and activism has also manifested in the creation of sporadic, temporary utopias like Pilot TV and Chances Dances. Latham graduated from The School of the Art Institute of Chicago with a BFA in 2008 and the University of Illinois at Chicago with an MFA in 2011. He has exhibited his work internationally and all over the U.S.

Last Friday, February 14th, I attended the panel “ LGBTIQ + Feminism,” as a part of TRACERS TAKES ON FEMINISM at Three Walls. Tracers hosted an all-day forum in which …