SOFT DRUGS “looks at how artworks incorporate play as process or idea for understanding or perceiving the world. play in artistic practice has a way of opening up audiences to new possibilities and perspectives and, while this activity is often felt to be a game, it is a key and rigorous approach in each artist’s idiosyncratic form of production. play can also employ humor or quirk to offset weighty issues or generate new awareness of one’s surroundings. the exhibition showcases performances, moving images, and sculptures that examine issues or challenges of the body, distraction, attraction, the built environment, and the apocalypse as sets of phenomena that could be heavy though lightened through playful and artful tactics.
I was lucky enough to catch up with SOFT DRUGS curator Teresa Silva, and ask her a few questions about her concept for this exhibit…
MS: What was your inspiration for mounting Soft Drugs?  And what about the exhibit’s title?
TS:  I was invited to guest curate the exhibition by the University of Michigan’s STAMPS School. I had in mind the notions of play and humor, either as process or practice, as a way to come to grips with material, the built environment or weighty issues with witty irreverence.  I’d been researching the Situationists and located a meditation by the Lettrist International about play as a rigorous approach to shifting perspective and possibilities. The writing was titled (tongue-in-cheek) soft drugs.
MS: The exhibit is described as presenting “play as an artistic practice,” As curator were you on the lookout for pieces that were innately playful?
TS: I went about it various ways. I looked for artists who play with or tinker as a way of art-making or I identified works that are rooted in the artist’s own sense of humor. Mostly, I talked closely with the artists about the show’s premise, and they developed new work. MS: You worked at the Hull House for some time – were you at all inspired by Viola Spolin and her improvised, play-based theatre games?
TS: In preparation for an exhibition at the Hull-House Museum, I did archival research on Viola Spolin’s teaching. The exhibition was about art education and showed her influence on today’s theatre pedagogy. My curatorial work usually comes from a point in history and connects to the contemporary moment.
MS: Were there challenges in curating objects alongside performance?
TS: Yes and no. The artists are fantastic and driven, so through ongoing dialogue, I figured out that the performative works would be best in the electrodes at Defibrillator Gallery. Those spaces are good for creating spectacle. 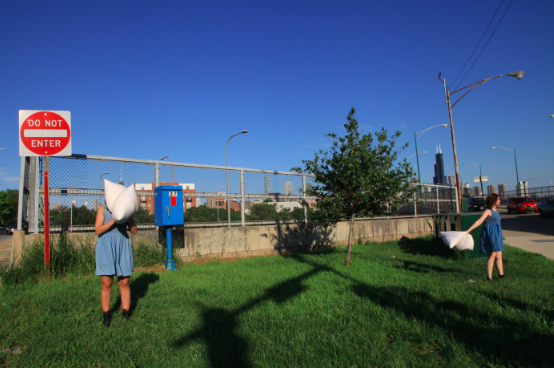 MS: How do these inform each other within the exhibit?
TS: I feel like Mothergirl’s performance Moments Together pairs nicely with Sabina Ott’s to perceive the invisible inside you. Both are subtly provocative and intoxicating. Meg Duguid’s interactive performance and Nicole Marroquin’s sculpture Orenda are fragmentary works that use color playfully.
MS: Any other exhibits/events/fun-stuff you are excited to visit during the conference?

TS: There’s so much happening that it makes my head spin. Honestly, I’ve been so occupied with different projects that I haven’t been able to see and do what I want. I look forward to William Pope.L’s interview today at CAA. I attended openings last night for Strange Bedfellows, RISK, and Social Paper at Columbia College. Smartly done shows.

Tonight. SOFT DRUGS “looks at how artworks incorporate play as process or idea for understanding or perceiving the world. play in artistic practice has a way of opening up audiences …