ARTexchange is an open and free forum that showcases working artist. Artists applied and were chosen in December to be part of the event, which hosts forty or so working artists. I went there last night and here are a few highlights. Magdalena Olszanowski deals with digital image production and female self image. Her iPad display showcased her creation, destruction, and re-incorporation of her own image in the context of space, violence, and rupture.

Tom Turner investigates color in digital images as a conduit for memory. In this picture, he uses three pico projectors to image a time-lapse sunset in Santa Monica, CA. 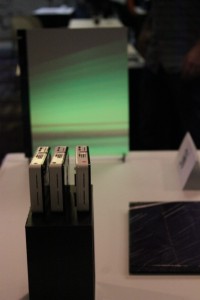 Charlie Citron received an International Travel Grant to attend this year’s conference. He showed his Joe Photos, a performative photography project placing GI Joe in cultural situations around the world . He says, “The idea of the cowboy and the pioneer is part of the Euro-American myth of the frontier and the nomad looking for another kind of life, and the juxtaposition is that there are many different types of cultures out there and many different representations that are not discussed. So by using other backgrounds and juxtaposing them, you challenge the cultural meaning of it as a displacement.” Joe Goes to the Wailing Wall by Charlie Citron

Zach Mory uses graphite and paper to explore time, labor, and repetition. Mory explains that his piece deals with the repetition of specific activity and the possibility for variation and exploration of the media. Other showcases include the Henry Jackson Lewis collection at the DuSable Museum of African American History. The display shows a retrospective of the Lewis’ late nineteenth-century political cartoons.

“I’ll show you mine if you show me yours,” a review of ARTexchange

ARTexchange is an open and free forum that showcases working artist. Artists applied and were chosen in December to be part of the event, which hosts forty or so working …