Composer and Sound Artist Howard Sandroff is inarguably one of the most celebrated artists among the distinguished Columbia College Chicago faculty.  His musical compositions are performed, recorded, published and broadcast throughout the world and have been featured at international festivals including The Aspen Music Festival, The International Association for Electronic Arts, The International Computer Music Conference, The Bejing MusicAcoustica Festival, the Musik Factory in Bergen, the Ultima Festival in Oslo, Norway, the M-Cluster festival at the Berlin Academy of Art, and many others.

According to AA&A Department Chairman, Pantelis Vassilakis,
“Prof. Sandroff represents a crucial but increasingly rare breed of academic with deep interests and expertise that transverse disciplinary boundaries and have enviable impact on our understanding of sound, music, and art.”
Dominique Chéenne, Professor of Acoustics adds,
“Howard is definitely respected by all who interact with him and has earned utmost respect from students and from peers. Personally I consider him the ‘academic conscience’ of the Department; you may not like what you hear every time but it’s good for you all the time.”

Howard’s influence is pervasive throughout the College.  His first appointment in 1978 as a member of the Adjunct Faculty inaugurated the study of Musical Acoustics in the Science Department, in the mid 1980’s he created the first sound curriculum in the Film Department, now the Department of Cinema Arts and Sciences and is probably the first Columbia faculty member to include computer applications in media in a sound design course for film.  In the 90’s at the urging of the music chair, William Russo, Sandroff authored and designed the first music courses in Electro-Acoustic Music, Synthesis Programming and Composition.  Then, along with Doug Jones, Associate Professor Emeritus of Acoustics, authored the first complete curriculum in sound production and acoustics.  That curriculum eventually became the Department of Audio Arts & Acoustics where he serves as Professor of Sound Art.

His influence is equally felt as the teacher of many of our younger faculty.  Sandroff’s thirty plus year service as Senior Lecturer in Music at the University of Chicago directly impacted key faculty and University of Chicago Alumni, in both Audio Arts and Music.  Ilya Levinson, Assistant Professor of Music Composition writes,
“I consider Howard an important formative force in my studies of composition. His ideas about “musical objects” as a core of compositional process affected greatly my thinking about music and brought a new beginning to my compositional career.”
Another former student, Sebastian Huydts, Associate Professor of Music and Director of Piano and Keyboard Studies adds,
“I took lessons with Howard in Electro-Acoustic Music and later in general Music Composition.  In his composition instruction, Howard taught me a methodical approach to musical manipulation and development, by way of rigorous writing and critical listening exercises.  For me, the brilliance of Howard’s approach rests in its combination of developing technical facility with artistic vision.”
Francisco Trigueros, an adjunct faculty member in the Music Department and the most recent former student contributes,
“Howard always pushes you to grow. He enriches your perspective through his knowledge in diverse fields. His enthusiasm for learning is contagious, and his energetic teaching style inspiring.“
And finally, Ben Sutherland, Assistant Professor and Associate Director of Audio Design and Product joins in,
“As Director of Computer Music Studios at the University of Chicago, Howard was central to my artistic, academic, and professional development as a composer and music technologist.  The ideas, knowledge, and artistic perspective he provided catalyzed the synthesis of my musical and technological interests – both creative and analytical – into the artistic and professional trajectory that I am still pursuing.  In other words, I can honestly say that without Howard I would not be where I am today.  Over the years, his mentorship and support have continued to strengthen my perspective and career as a musician, music technologist, and academic, and I am overjoyed to have joined him as a colleague in Audio Arts & Acoustics.”

He has appeared as Sound Artist with the Santa Fe Opera, the Chicago Symphony Chamber Series, the Ojai Festival,  I.S.C.M. Boston, Contempo of The University of Chicago and many others and has collaborated with visionaries like Pierre Boulez and Morton Subotnick .
Now in his 37th year with Columbia College, Sandroff’s energy and innovation is omnipresent.  Colleague Benj Kanters, Associate Professor of Audio Design and Production and Associate Chair of the Department of Audio Arts & Acoustics summarizes,
“As the senior member of the faculty, he is an inspired teacher and leader in the areas of music composition, music technology and sound art, and continues to provide valuable perspective to our sometimes overly technical field.”

His most recent contribution to the Colleges offerings is his work on the newly approved Bachelor of Science in Music Technology.  Sandroff co-chaired the Music Technology Task Force along with Associate Provost Insook Choi, which for the last two years worked to create an innovative and ground breaking interdisciplinary degree across three departments and two schools.

Task Force member and colleague, Joseph Cancellaro, Associate Professor and Chair of the Department of Interactive Arts and Media writes,
“Howard Sandroff is one of the leading academic and creative minds at Columbia College Chicago. I have known Howard since 2000 and since that time we have worked on a few notable projects. The most important is the creation and successful approval of the Music Technology Bachelor of Science.  Under his leadership and co-direction we, as a task force, were always a few steps ahead in terms of preparing and forecasting future issues, which may have been encountered. As a result we were completely prepared for any and all eventualities and the degree was fully accepted by the college and the administration.  … Howard is an inspiration regarding music composition and sound design. He has an impeccable international reputation and I am honored to call myself among his friends and colleagues.”
Nate Bakkum, Assistant Professor of Musicology and Associate Chair of the Music Department adds
“In addition to his acclaim as a composer, Howard is a masterful and sensitive educator. He has pushed his colleagues to reimagine their approaches to curriculum development and pedagogy. Owing largely to his stewardship, an interdisciplinary faculty committee has recently developed of an exciting new Bachelor of Science degree in Music Technology.”

The proposal authored by Sandroff and his colleagues received accolades from the Provost, The Faculty Senate and the Academic Affairs Committee, as
“. . . a strong model for interdisciplinary collaboration in the future.”

Ever vigilant to expand his creative output, Sandroff began sculpting in welded steel in the early 2000’s.  That work has progressed to the creation of sculptural percussion, objects that are played and processed by computer.  Along with colleague Ben Sutherland, percussionist and composer, they have created multi-channel, inter-active sound compositions.  Sutherland performs on the steel sound sculpture while Sandroff controls an interactive computer program that processes and redistributes the sounds through loudspeakers, which surround the audience. Their performances opened the 2012 and 13 exhibits on the art and career of Howard Sandroff presented by both the Columbia College Library and the Regenstein Library at The University of Chicago respectively. Sandroff and Sutherland have proposed their performance for the upcoming (August 2015) All College Faculty Forum.

One recent crowning achievement of Sandroff’s career is described by Chair Vassilakis,
“Prof. Sandroff’s recent inclusion to the latest edition of The New Grove Dictionary of Music and Musicians (2013 print edition; 2014 online edition) may be just one of the many recognition milestones marking his career but its importance can hardly be overstated. First published in 1879, “The Grove” is one of the largest reference works on Western music and “the best single source of musical information in English” (NY Times, 2001), featuring musicians/composers whose work constitutes Western Art Music’s canon of creative output. Of the ~ 20,000 biographical entries, a very small portion recognizes living composers and we are honored to now have one of our own being part of this exclusive group.”

As Sandroff and his colleagues across the campus explore all the media and artistic interactions possible using the newest information technology, the college is grateful for faculty that cross the generations as well as the boundaries of artistic pursuit. 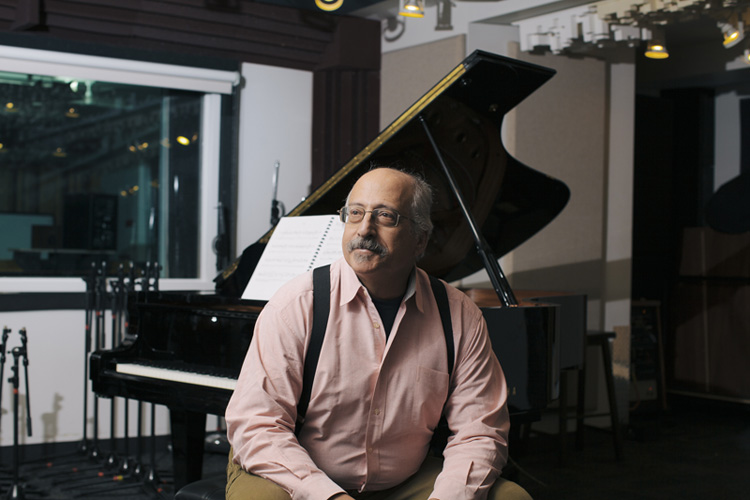