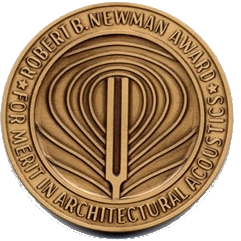 The prize honors outstanding students at schools of architecture and architectural engineering throughout the world who demonstrate excellence in this discipline and in the application of acoustical design principles in the course of their study.
Jay was awarded the medal for his outstanding work on the project, “The Development and Analysis of a Large Variable Acoustics Space,” presented at the 167th ASA meeting, 4/2014. He has now joined the ranks of a very select group of primarily graduate students from throughout the world who, since 1986, have been awarded this honor.

If anyone needed proof that inspiration and excellence are the hallmarks of success, it is worth noting that two past students of our Acoustics program, Ryan Cranfill and Kevin Quinn, won this award in 2012, as has our very own Assistant Professor Lauren Ronsse, Ph.D., who received the award, also as an undergraduate student, in 2005.

Acoustics senior, Miles Possing, was awarded a travel grant from the National Council of Acoustical Consultants (NCAC), to present a paper at the Acoustical Society of America (ASA) national meeting in Indianapolis, IN. NCAC is a nationally recognized organization with a strong focus on acoustics education and standards.
Miles was awarded this grant for his outstanding senior project, “Examination and Development of Numerical Methods and Algorithms Designed for the Determination of an Enclosure’s Acoustical Characteristics via the Schroeder Function,” which he presented at the 168th ASA meeting, 10/2014.
Past recipients have come from institutions such as the University of Florida, Georgia Institute of Technology, University of Nebraska, Lincoln, and Rensselaer Polytechnic Institute, to name a few, and include our own Eric McGowan, who received the award twice, in 2012 and in 2013!

The AA&A Department is honored to count NCAC and ASA within its ranks of academic partners and offers its proud and heartfelt congratulations to Jay and Miles for their well earned recognitions that continue a tradition of excellence!