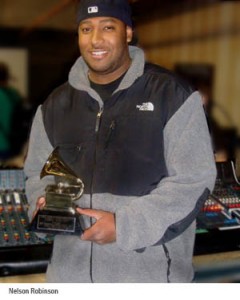 Columbia College recognizes that they’re a school with the goal of not just teaching the core elements of art forms to students but also teaching them how to use the forms to engage the world, and to change themselves in the process.

“When I found out I won, I was shocked and pretty excited,” Robinson says. “I knew that what we were working on was a big deal—but I had no idea it was Grammy status.”

The album, which has been referred to as “one of the most stunning contemporary gospel recordings in recent memory,”won two Grammys in total: Best Gospel Performance, where they were shared the honor in a tie-vote with Aretha Franklin and Mary J. Blige, and Best Traditional Gospel Album: “Live—One Last Time.”

Robinson says he owes a lot to Columbia instructor Jack Alexander for offering him the tools and knowledge required to have successful career in a technologically-intensive world.

Alexander, who started his career in audio in 1967, supervises the Live Sound Reinforcement Program in Columbia’s Department of Audio Arts & Acoustics. He began as a part-time instructor at Columbia 1983 and began his full-time appointment in 1996. He is currently the education editor for Live Sound International, the leading journal of the live sound production industry.

“He definitely taught me a whole lot—all of the techniques, the secrets and the tricks for sounds I use on all my shows,” Robinson says.

In addition to working with The Clark Sisters, Robinson has worked on the African Festival of the Arts, the Essence Music Festival, the New Orleans Jazz Fest Congo Square, and the AIBA Opening Ceremonies. He has professional experience working for Sound of Authority, Metro Mobile Recording, Wild Hare Reggae Club, and Clairshowco Chicago.

Robinson says his life has changed dramatically since receiving the Grammy award. He has been receiving more queries for work and has been given the opportunity to work on a lot more shows.

“My best advice for other people who want to do what I do is to just stick with it,” he says. “There may be hard times where no work is coming in. But for me, I decided to do what I love, and I always knew that if I did my best then the money and the work would come. And it has.”