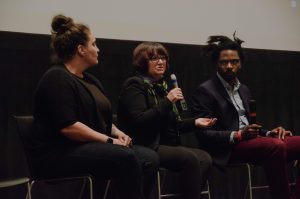 Justice, hope and empowerment through the eyes of three documentarians

Now more than ever, the demand for documentary has grown immensely and in particular, films related to social justice have struck a chord with audiences nationwide especially in our divisive country.

Yesterday afternoon, audiences got a chance to hear from three working documentary filmmakers in a panel about Chicago Activism. Margaret Byrne, Fareed Alston, and Laurie Little all gave presentations on a particular film of theirs about social justice in the Chicagoland followed by a brief Q&A with them.

First, Margaret Byrne showed a trailer for a documentary series of hers, Raising Bertie, a project about a cop who has contributed to the wrongful convictions of Chicago residents, revealing the fundamental problems in the social justice system. Next, Laurie Little showed a trailer for her film, Sisters’ March, a short documentary reflecting on the journey between Chicago and DC, connects voices of hope, empowerment, and intersectionality during the Women’s March. Last but not least, Fareed Alston presented the beginning of his film, 12 Days in Ferguson which gives an underground view of the 2014 events in Ferguson, Missouri following the killing of Michael Brown Jr.

In the Q&A, the audience got some insight about working on films that cover sensitive issues and how to work in disorderly environments such as protests. Overall, the panel was informative and engaging for aspiring documentary filmmakers.