The Columbia College Chicago Theatre Department honors the life and mourns the passing of longtime faculty member Bradley Mott, who died Saturday, October 10, at 64, following a battle with pancreatic cancer. Bradley, a graduate of Northwestern University, was a beloved mentor for generations of theatre students at Columbia College, where he taught alongside his wife, Susan Osborne-Mott, before the couple moved to New Jersey in 2008 after Susan became an Episcopal minister. As Chicago Tribune theatre critic Chris Jones noted in his October 11 obituary of Bradley, the couple were “both people of faith in service to others.” Their daughter, Columbia College alum Emily Mott Zeimetz ’08, is a graduate of the Theatre Department’s BA Program in Musical Theatre, and their son, Andrew Mott, is a former student in Columbia’s Cultural Studies program. Bradley Mott was a well-known actor in Chicago’s vibrant theatre scene. As the Tribune‘s Chris Jones observed in his obituary, he was “a beloved Chicago actor as well known for the joy he dispensed onstage as for his antics and camaraderie behind the scenes.” He made his professional debut in 1978 in the classic Oliver Goldsmith comedy She Stoops to Conquer at Chicago’s Court Theatre, and for the next 30 years delivered a string of delicious performances at most of the major theatres in the Chicago area, including Steppenwolf, Chicago Shakespeare Theatre, Wisdom Bridge, National Jewish Theatre, Drury Lane Theatre, Writers Theatre, First Folio Theatre, and Chicago Children’s Theatre. He also worked extensively at Chicago’s Goodman Theatre, where he appeared in the American premiere of the British comedy Red Noses as well as in Sunday in the Park with George, Galileo, The Government Inspector, Cyrano de Bergerac, and Curse of the Starving Class. He was especially well known for his portrayal of jovial Mr. Fezziwig in Goodman’s annual production of Charles Dickens’ A Christmas Carol. He continued to play Fezziwig to perfection when he relocated to New Jersey, appearing in the role at the McCarter Theatre in Princeton. He portrayed Kris Kringle in the Chicago Center for the Performing Arts’ 2002 production of Miracle on 34th Street under the direction of his former Columbia College Theatre Department student and colleague, Tony Award-winning director David Cromer HDR ’17, who told the Tribune‘s Chris Jones: “Bradley Mott was a delicious artist and a delicious person.” His other significant stage credits included Sir Toby Belch in Court Theatre’s staging of Shakespeare’s Twelfth Night, Bottom in Shakespeare’s A Midsummer Night’s Dream at Court, and two Joseph Jefferson Award-nominated performances in musicals, as Alfred P. Doolittle (“I’m Getting Married in the Morning”) in Court Theatre’s My Fair Lady and Pseudolus in Drury Lane’s production of A Funny Thing Happened on the Way to the Forum. 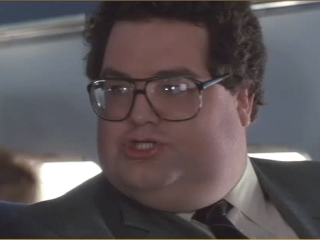 Bradley Mott in “The Accidental Tourist.”

His film credits include roles in The Accidental Tourist, Meet the Applegates, and Inside Llewyn Davis, as well as the TV-movie remake of What Ever Happened to Baby Jane? starring Vanessa and Lynn Redgrave.

Bradley Mott (in wheelchair) with the cast of students and professional guest artists in the Columbia College Chicago Theatre Department’s production of “The Man Who Came to Dinner.” 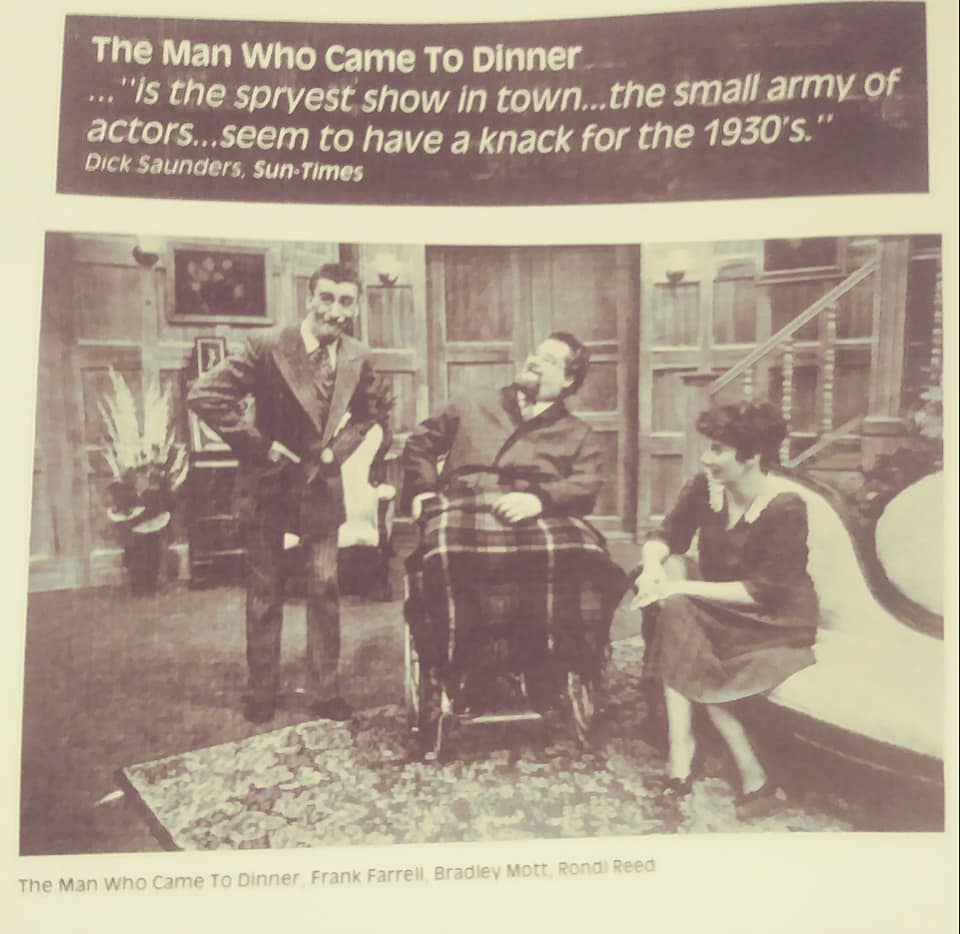 At the Columbia College Theatre Department, he appeared as a guest artist in two Mainstage Season productions, working alongside his students in the vintage comedy The Man Who Came to Dinner under the direction of the woman who would become his wife. His professional costars in that show were Frank Farrell and future Tony Award winners Laurie Metcalf and Rondi Reed. 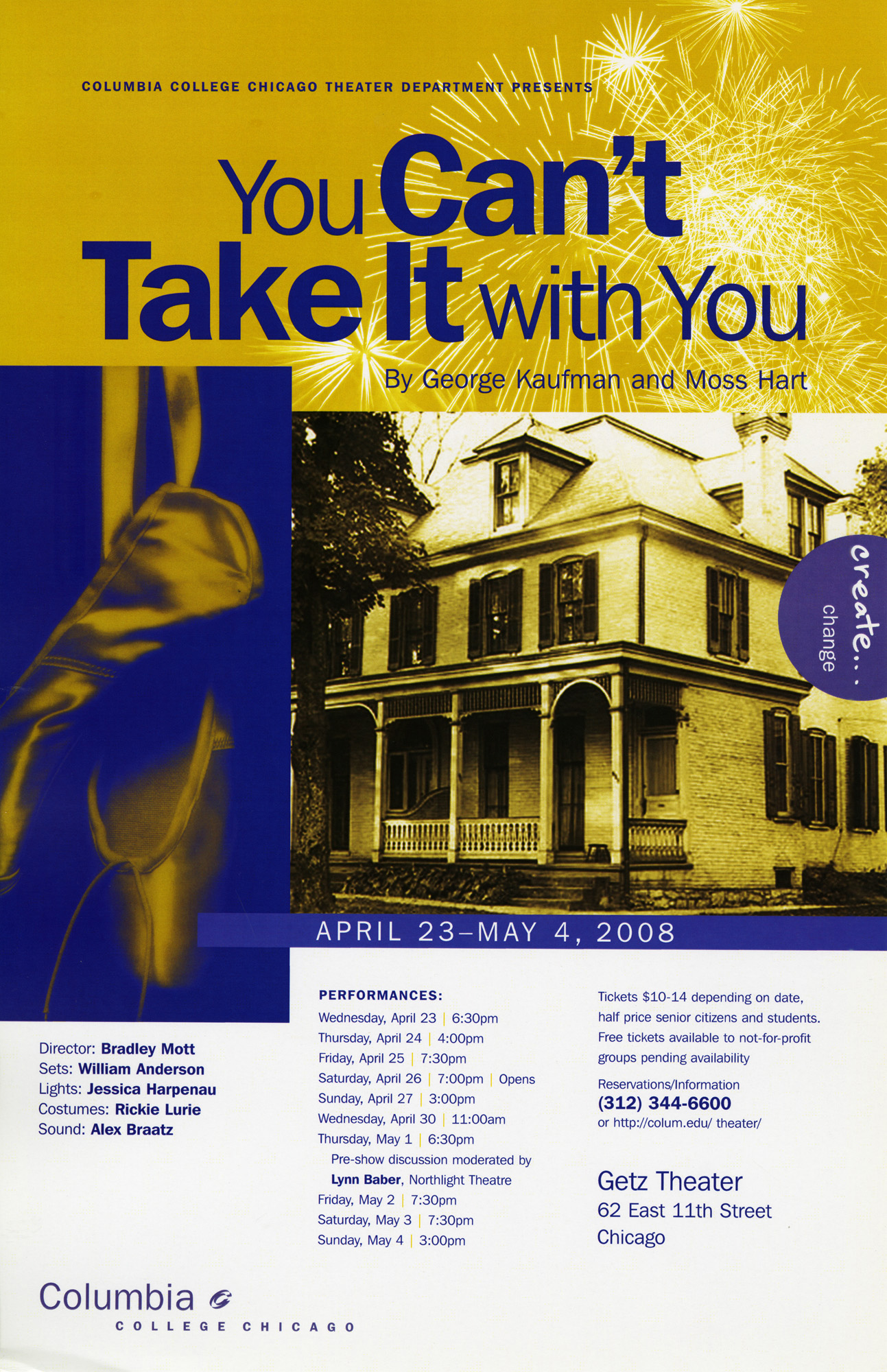 He also appeared in former Theatre Department chair Sheldon Patinkin‘s staging of the Cole Porter musical Kiss Me, Kate at Columbia, and also directed all-student productions of the classic comedies The Recruiting Officer and You Can’t Take It With You.

Bradley and his wife returned to Chicago when Susan Osborne-Mott retired from the church, according to Theatre Department Associate Chair Susan Padveen. “Brad Mott was a great collaborator, artist and educator,” Padveen reflected. “His former students loved him because of his talent as a teacher but also because he cared about them as human beings; he was also the person you always wanted to have in the room with you. When I close my eyes, I hear his laugh, open them and see that amazingly impish smile. He will be missed. but never forgotten.”

Added Theatre Department Associate Professor Emeritus Jeff Ginsberg: “We know Brad as a consummate actor and inspiring teacher, a brilliant comedian. In the Buddhist tradition there is the tradition of virtues called The Four Divine Abodes–the third being ‘sympathetic joy,’ the ability to celebrate the successes of your friends as if they were your own. The profession of the theatre can be a real challenge to manifesting this virtue. Brad Mott was the paragon of this standard: a greatly generous, kind-hearted and loving man who always celebrated the successes of others with joy. An indelible artist and person. What a privilege to have walked the earth at the same time as Brad.”

“I was familiar with Brad Mott and his work as an actor around town–but we never got to know each other,” stated Carin Silkaitis, the Allen and Lynn Turner Chair of the Columbia College Chicago Theatre Department. “Listening to the stories of my colleagues and former students, I feel like I know this warm, funny, genuine man. I am so sorry for this great loss to the Chicago theatre community and, of course, for Brad’s family and friends. He touched so many lives, and his memory will surely live on for many years to come. The Theatre Department wishes the Mott family comfort and peace during this difficult time.”