An Interview with Camille T. Dungy 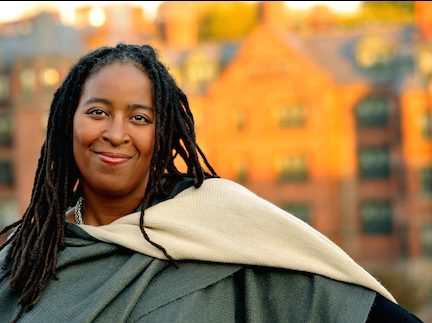 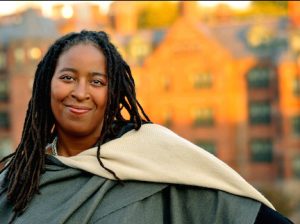 Photo courtesy of the Poetry Foundation

Camille T. Dungy is the author of four collections of poetry, most recently Trophic Cascade. She has also edited a number of anthologies, including Black Nature: Four Centuries of African American Nature Poetry. She is a professor at Colorado State University. Her latest is the essay collection Guidebook to Relative Strangers: Journeys into Race, Motherhood, and History.

When Camille T. Dungy visited Columbia College Chicago for a reading this fall, she sat down with Punctuate assistant editors Ishah Houston and Taylor Mel. The interview was edited by Mariel Tishma.

Punctuate: Given the fact that history is a constant force within your work, do you feel yourself trying to understand those who are gone, but whose echo seems to heavily influence your work?

Camille T. Dungy: I think writing offers me a kind of experience and time travel, where I get to be in lots of different moments simultaneously. I don’t know that we have yet invented a mechanical object to allow us to do that, but writing does it. So I can be right here, but I can’t walk around Michigan Avenue in Chicago without remembering myself as seven years old. I was here every summer. I’m right here, but I’m also back there at the same time. The moment I do that, I think back to my grandparents’ past and their history and what brought them to Chicago. What they left to come to Chicago. I’m in that. I am in all those places and with you. Here and now but also in some other times, and those people who’ve lived in other times are always with me. You might think of them as ghosts, but I’d like to think of them as guides.

Punctuate: In Guidebook to Relative Strangers, you mentioned how intimate poetry is to you. Whenever you change form, do you feel like a sense of intimacy has changed as well?

Dungy: I’m not entirely sure I was thinking about it that way when I was writing it. Since the book has been published I have had more than one conversation where people are like, “Thank you, now you’ve written a book I could read.” People feel like they have to prepare themselves to enter poetry. But an essay is delivering information in the same form that you get all your other information all the time, and so people don’t feel that sense of a requirement to dress-up. What I found, is that my audience has changed or widened or opened or relaxed or something. I can have a different kind of conversation with them, but I wasn’t thinking that when I was writing the two different modes. I was just thinking, “I need to stay in this longer than a poem can stay in it.” I need to speak more directly, and perhaps more discursively, and more on-the-nose than I might be desiring to do in a poem.

Punctuate: In your poetry you might touch on a subject fleetingly, but in an essay you have to expand it to deliver more information. Did you find yourself having to go back a lot?

Dungy: I pretty much know when I get started, what direction we’re gonna take. So I don’t know that it shifted in the revision process. The composition of essays is just different, in terms of its time. If I’m revising an essay, it’s really useful if I can stay in that essay for the whole essay. In one like “Body of Evidence,” I would have to have a good three hours, or four hours to be able to just read the whole thing and do everything that I needed to do to revise it. It would be a really long poem that would require four hours just to read it. Like you might spend four hours in the revision process but not just the getting-through-it process. So time for me was the big, architectural shift.

Punctuate: So, in reference to “The Conscientious Outsider,” you have a character that just doesn’t get the bigger picture. In a world full of “Long Islands,” what do you believe will change their perspective?

Dungy: I’m not sure Long Island’s perspective is ever going to get changed. I think a lot of other people at that table did move their positions, but I think that’s important to realize that there are some people that are just not going to. They’re just not gonna hear. They’re just not gonna see, and she is an example of one of them. Every other person at that table, by the end of that conversation had shifted their perspectives, both on questions of same-gender-loving people, and blackness. That was like two-for-one, we got at that table. That to me is important, the conversation. You cannot change everybody’s heart. But you can do some pretty good work in the world, even still.

Punctuate: What would you say is the job of a writer? Do they have a job or responsibility to the world, possibly to change minds?

Dungy: I think the job of the writer is to write the best work that they possibly can as frequently as they are able to do so. Some writers write just one great book. But that one great book takes us further. Then we have other people, who just every time they sit down and publish something it’s like, “Oh, now our world’s changed a little bit again and again and again.” So, what your personal contribution is going to be in terms of space on the book-shelves, that’s hard to say. But if every time you sit down to write, you really are trying to do the best work that you can do, in the deepest most complicated, most real way, then the work is done.

Punctuate: So you’re an editor. How do you keep yourself from editing as you write?

Dungy: I think that that is a really important thing to figure out how to do, because sometimes we shut ourselves down, which is not the same as editing. Really what that is, is censoring. One of the first things to remember is the world is happy for you to be quiet. Why are you gonna be the one who silences yourself? So how do you get around that?

I try not to compose on a device. I try to compose by hand for as long as possible. And I will say that length of time is shortened now, I’m a little more reliant on seeing typed things, particularly when I’m writing essays, but the purpose of starting out on the page is that it feels less official and I can’t do a quick erase, delete, fix and change before I even know what’s written.

Sometimes those horrible thoughts actually have something in them, and you can kind of go back and mine them. But even if they don’t, you have their record. You can be like, “Look, I wrote five pages of awful stuff, and then I got a paragraph.” But if you’ve been fixing it and changing it and erasing it and deleting it, at the end of the day all you have is that paragraph, and you feel like a failure. You don’t feel like you’ve done anything. Whereas, “Look at all the work I’d done to get to here”—it’s a really different psychological experience.

Punctuate: In “Writing Home,” you say, “I have travelled long enough and far enough to know that home is not a place . . . home is memory.” Can you speak more on this?

Dungy: I can a little bit. I was walking from a hotel on Dearborn, and I recognized the back of the Hilton. I saw the villa thing on top from the back, and the first thing I thought was, “You know you’re home when you can see the back of a building and go ‘Oh! I know exactly where I am.’ I remember the time Obama spoke up there, and I went to an AWP party up there, and I always would drive past it on the way home and on the way to my grandparents’ house.” So that sense of walking through a space and feeling layers of belonging and memory, rejection, disappointment. I feel like that’s all a way of being at home.

If I go to Lynchburg, VA, where my mother lived as a young girl, I don’t know if I’m reacting to an experience I had or an experience my mother had, or my grandparents had. But I’m reacting. I’m having a feeling in this place—which usually has nothing to do with my own personal experiences— because I am at home in that place, too, with those memories.

Punctuate: What kinds of places inspire you?

Dungy: Water! But really just big bodies of water. Rivers are like, “Oh, that’s kind of cool—it’s on it’s way to a big body of water.”  I can go to other places and be like, “Oh, this is kind of interesting. When am I going home?”

Punctuate: When you sit down to write something, do you know where it’s going to go, or are you in the camp of journaling until you get somewhere?

Dungy: Yes. The answer is both of those. I can give you an example of both the first and last essays in the collection, starting because things happened and I was like, “I gotta write these stories down.” “The Conscientious Outsider” I wrote the night the conversation happened. And afterwards I showed Seattle the draft, and she was like, “I should have done that. I just drank.”

And that is another option. But maybe have a glass of something and then go sit down to write, because you clearly need to deal with it. The writing is a way of managing and dealing with experiences, and getting something out of it. I mean I have an essay—really, I have a book, I mean, thank you Long Island.

Punctuate: You speak on the feeling of otherness, in the first chapter of Guidebook to Relative Strangers. What would you tell a young person who feels that divide of otherness, and is struggling with the destructive natures of the world and human behavior?

Dungy: I would be like, “if you’re not feeling that, what is wrong with you?” If you are paying attention, at all—I think we should all be paying attention, because there is stuff happening in this world which fills me with terror. I am very worried. All the time. And sad. And angry. And it’s cause I’m paying attention. Because I spend so much time being terrified and sad and angry, I also have to be like “Big water!” and “Joy!” and “This room full of proactive women.” I have to find the places where joy happens and then that feeds me again. I’m like, “Okay, I will fight for the big water not to get super polluted for you and for your future and my future and on we go.