Home  /  Archive  /  News with a laugh: A new course in comedy journalism debuts

A new class that combines comedy and journalism borrowed from the Daily Show to teach students how to produce news videos in a humorous way.

Comedy Journalism ran for the first time this year during J-term.

“So the idea came out of a Daily Show of John Stewart,” said adjunct professor Stephanie B. Goldberg, who created the course. “And John Oliver is doing right now, in which it provided either the humorous commentary on the news. What Oliver does quite unique is he is really combing humor and investigative journalism.”

“It is a great way to get journalism students to relax and enjoy film making or rather video making,” Goldberg said. “The comedy major students are also very grateful to get this course in video making. So the atmosphere of this course was wonderful.” 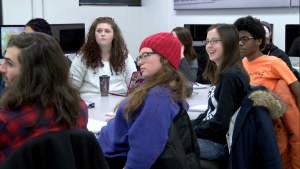 Students in Comedy Journalism, a new course that ran for the first time during J-term this year, discuss the process of editing segments of their video footage. (Photo by Alexandra Marshall)

Journalism major Anna Zielinski was one of the students in the class. “I think comedy is effective in getting points across, a way of showing people your stand on issues, without telling them what to think,” she said.

Selena Cotte, a poetry major, said she thought the course merged two disciplines that she enjoys, writing and comedy.

“I’ve never considered using them together, but I also appreciate that both can be used together without the essence of either being lost,” Cotte said.

Goldberg said she realized in planning the course that a generation of journalists and documentary filmmakers had grown up with improvisational comedy. “It permeates their work,” she said. “We tried to showcase as many as we could and, in some instances, ended up introducing videographers on opposite coasts.”