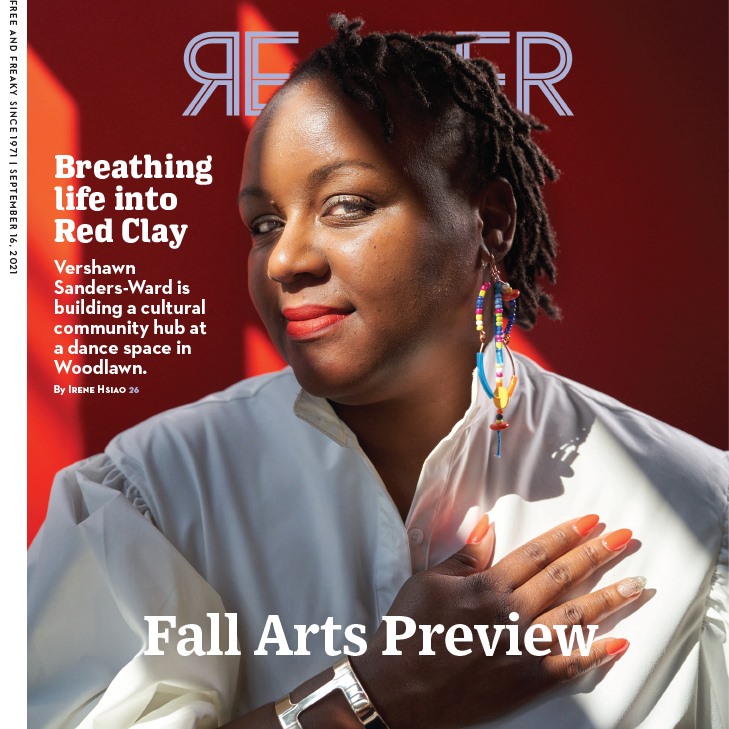 Dance Center of Columbia College Chicago alum and former faculty member Vershawn Sanders-Ward ’02, a graduate of Columbia College’s Dance BFA program, is featured in the Chicago Reader‘s 2021 Fall Arts Preview, published on September 15, 2021. The cover story by Irene Hsiao profiles Sanders-Ward and her dance troupe, Red Clay Dance Company, which – as previously reported in this blog – has opened its own home in the Woodlawn neighborhood on Chicago’s south side. “Autonomy over a place to gather and create has always been central to the vision for Red Clay,” writes Hsiao. “Sanders-Ward first encountered Senegalese choreographer Germaine Acogny during her undergraduate studies at Columbia College. After graduating with an MFA in dance from NYU, Sanders-Ward continued her studies for three months at Acogny’s school in Toubab Dialaw, Senegal. Her experiences at the International Centre for Traditional and Contemporary African Dances, otherwise known as École des Sables, not only informed her choreographic voice but solidified her determination to build a company, and with it, a thriving community.”

“That was the first moment I realized dance could be a driver economically for community,” Sanders-Ward says in the Reader interview. “Arts could infuse opportunity and dollars and tourism into a really small neighborhood and make it visible to the world.” The Reader article also reports that Red Clay, a company with a mission of teaching and performing dances of the African diaspora to advance cultural and socioeconomic equality, has been working with another south-side organization, Urban Growers Collective, to develop new work on land practices and urban communities. “Urban Growers Collective is adamant about teaching communities about food: food injustice, food disparities, how do I cultivate my own food for myself?” Sanders-Ward says. “We’re deepening our research into land practices and trying to translate that back to more urban communities. It feels like the time for us to go big and do something outside the theatre. For a project like this and how we’re trying to engage community, we need to take our time. No one’s rushing back into the theatre right now, so why not take our time? We need time to create.”