10 years ago I would have been the last person who should be writing this article. I was stubborn. Still am, in fact. I put a lot of thought into the decisions I make, and that makes them easy to become attached to. I had a professor in grad school who liked to “diagnose” students with various personality flaws. He told one student she “lacked the courage to be creative,” and another that he “used academic speak to hide insecurities of his intelligence.” Mine was that I “had a problem with disagreement.” I remember how piercing that was to hear. Though the notion that he felt this was an appropriate practice is not without question, it is something that has stuck with me. It stung, but it wasn’t untrue. I wasn’t refusing to engage in conversations with anyone holding a different opinion to mine. On the contrary, I loved learning of people’s differences and what made them unique. It was far more subtle than that—more personal. I was bad at digesting criticism.

Looking back at how I handled critiques in school, I can see where my “diagnosis” of having difficulty with disagreement came from. I had a vision, and I spent most of the time in a critique forcing others to hear it. When someone managed to get a word in edgewise, I would argue the case for whichever decision they were questioning. No one was trying to hurt my feelings or tear me apart, but I sure was on the defense like they were. When my time would come to an end, I’d leave feeling misunderstood. I told myself that maybe possibly a few of the suggestions might be helpful, but the vast majority of their feedback was off base. The result was that my work after the critique was no better than it was before. I wasn’t growing. Meanwhile, I watched my classmates eating up feedback, asking follow-up questions, valuing the insights they were getting, and consequently growing into much better designers than they were before.
Hearing someone point out where you’ve fallen short is hard. It’s also extremely necessary. Design deals in people—other people, to be exact. In order to make work that works in real life, it needs to be understood by other people. If you’re missing the mark, you need to know that. Otherwise, you’re going to be putting out projects that’ll soon become the future memes we are all poking fun at. You know the kinds of things I’m talking about. We’ve seen quite a few ad campaigns this past year where everyone was wondering how no one questioned them before they went live.

Who could forget the great Kendall Jenner Pepsi ad debacle of 2017? Jenner finally notices a protest happening right in front of her and decides only she can solve the whole thing by giving a police officer (dressed like a delivery man for some reason) a can of Pepsi. Needless to say, the internet did not approve and made their views very known in the most internet way possible—memes.

Twitter was ablaze with righteous mockery about how ridiculous and tone deaf this ad was. In a time where public protests and marches in the United States are on the rise as responses to grievous tragedies and for civic and political engagement, this ad was a slap in the face of those laboring for justice. It appeared that no one at Pepsi had any idea this might not go over well. At least this is what they claimed in their public apology:

Unfortunately, this wasn’t even close to being the worst faux paux of 2017’s ad cycle. In October, the beloved Dove brand with their “Real Beauty” campaign that once won over all our hearts, posted this ad on Facebook. It appeared to be a black woman removing her shirt—which one could read as symbolic of using Dove body wash—revealing a white woman underneath. I can’t really imagine what the intended message was or how anything would ever justify the obviously racist messages in this ad.

How didn’t anyone question or say something? It’s a sentiment I’ve heard many times in regards to ads like this. But I don’t doubt that some people did question it, that perhaps some even said something. What is more likely is that those doubts were dismissed, ignored, or justified. Sure, after the white woman is revealed, she removed her shirt again to reveal a middle eastern woman, but that doesn’t undo the very real racist undertones of that first transition. Dove didn’t seek out and listen to the voices of WOC to gain their perspectives on how they were being represented. This is the danger of not seeking, reflecting on, and understanding constructive criticism.

Getting good feedback is a skill. It takes practice. Good feedback, however, does not mean praise. While hearing that you’ve done something well feels great in the moment, the real goal of a critique is to shed light on areas of your work that need improvement, things you couldn’t see on your own. That means what the other people in the room have to say is more important than what you have to say. Prioritize outside conversation, not your own internal monologue. Listen. Really listen. Ask more questions until you understand what someone is really trying to say. Most importantly, believe the people giving you their thoughts . No one owes you their opinion, so be grateful and patient while they try to articulate their ideas on the spot.
Analyze.
Once you are working, you will spend quite a bit of your time listening to people. Between calls, email, texts, slack, etc., the back and forth feedback you’ll get on a project is often confusing, redundant, vague, and inconsistent. People will use made-up words and hand-gestures, go on tangents barely relevant to the topic, and you will need to learn to decode it. That’s your job as a designer. They don’t owe you clarity. Your job as a student is to hone that skill. Learn how to find the ten percent that is helpful in what someone is saying, plant seeds in those ideas and harvest them. If you want to grow, you need to learn to be fed by critique. School is the perfect time to practice.
Repeat.

Put yourself in situations to receive constructive criticism. In class critiques, volunteer to go first. Facilitate the discussion to get as much out of your time as possible. Meet with professors and professionals outside of class, and go to events like Test Flight. A successful critique isn’t one where everyone loves what you’ve made, or where you show how you can do exactly as you’ve been told. Your goal is to come out with a few new insights from someone who sees things differently than you do. That person doesn’t need to understand you or every little detail of your project to say something valuable about it. It’s the difference in their perspective that’s helpful. Lead the conversation until you have learned something. Ask questions that lead to answers you didn’t already know. Let the conversation go on tangents, get off topic, tell stories that only slightly relate. All the while, listen and be open. If something doesn’t work, it doesn’t work, regardless of how much you like it or how much time you spent on it.

It’s still not always easy for me to digest criticism. Afterall, I’m still stubborn. But I’ve learned to look at it differently. We’re on the same team, searching for flaws together, working to make more effective and socially beneficial design. Sometimes we may disagree, but those disagreements lead to insights that make for more informed work. Being open to feedback isn’t just how we will become better designers. It’s how we will become better people.
If you want to be better in ten years than you are today, seek out critique.
Previous Article Working Wednesday: Brittany Lippert ’14 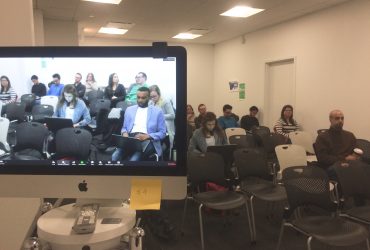