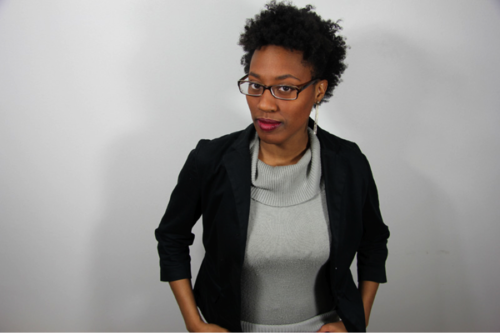 Work that Matters: the 2013 Non-Profit Career Fair is November 12th. In the lead-up to the fair, we will be featuring stories from students and alumni who did great work for a great cause. Today, Jessica Estelle Huggins (2012 Film & Video grad) tells us about her experience working with Street Level Youth Media.

Tell us about the organization you worked for:
Street Level Youth Media is an amazing non-profit that is geared towards advancing the technical and storytelling skill sets of the CPS youth (ages 8-22) through media. Media consists of film, music production, photography and graphic design. Street Level has the only free recording studio for youth in the city of Chicago, the only multimedia center that has free workshops and seasonal classes for CPS youth and has professional teaching artists that help guide the students with their projects. Street Level also works with the CPS schools developing artistic curriculums.

What were some of the main projects/initiatives you worked on with the organization?
Street Level has this awesome summer program called SAAP (Summer Arts Apprenticeship Program) where a selected group of CPS students and teaching artists are hired to create multimedia pieces based on the summer’s theme. This summer, there were three groups, also known as pods that focused on the theme of violence. There were central questions put in place for all of us to think about as we were creating work: What is violence? Where does it come from? How can we use other tactics to express ourselves? These questions carried with me even after the program ended.
With the group that I was specifically a part of, we created a music video based on judgment. Our apprentices wanted to explore how judgments/stereotypes are psychologically violent to the victim as well as the person/people judging. The song (music and lyrics) were created by the apprentices as well which helped shape the video. The graphic design element was in connection with the video and song as well. And the photography was essentially stills of process of the entire project.  It took our group 4 weeks to complete our entire installation.

Do you want to work for a non-profit in the future? How did this experience impact your long-term goals?
I would not mind working for another non-profit in the future. This experience has taught me that I would like to open up a film high school later in life when I am a lot more established as a filmmaker. There are so many roles and responsibilities when it comes to the film making process that a lot of people are not aware of. With my future school, I hope to instill these roles for students that are interested in becoming our future visual storytellers. I think it’s highly important to nurture the thoughts of the youth.

Have you developed content or experienced successes that you can use in your resume or portfolio?
Ever since graduating from Columbia, I make sure that whatever I am working on is developed enough where I can take pride in the final product and use in my portfolio. My latest project that I’m most proud of is with my collaboration with UIC professor, Derrick Sanders who hired me to co-produced a short film based on the Darien Albert story that happened in Chicago in summer 2009. The film is called, “A Perfect Day” and it has been in three film festivals so far this year. It’s such as important story to tell and I’m happy to be a part of the movement.

Why do you think students should consider getting involved with non-profit organizations?
Students should most definitely get involved in non-profit organizations because most of the people working are not working for the money but for the mission. No matter what anyone decides to do in life, there should be a point where one should work for passion and experience just because that’s always worth more than money. But that also depends on the work that you are doing.

Is there anything else you want us to know about your experience with non-profits?
I think that there is a misconception sometimes with non-profits. I notice that there are people all for them and others that think that an organization will fail based on the lack of resources, funding, organization and sometimes, dedicated people. Non-profits always are birthed based on an amazing idea to create change.  It’s important to find people who believe in the same ideas. This is why I believe Street Level Youth Media is amazing and I cannot wait to watch them continue to prosper. The SAAP program installations are still up and free to the public. Visit them during business hours at 1637 North Ashland Ave. Chicago, IL. 60622. You can also call: (773) 862-5331.

Jessica is a Creative Film Producer whose recent projects include Chi~Voices, a Poetic Film Series.

Check back for additional student features, and mark your calendars for Work that Matters on November 12th! A diverse group of non-profits from around Chicago will be recruiting volunteers, interns and employees.

We bet you’ve done some great work too. Share your jobs, internships, and volunteer experiences via our Success Campaign.