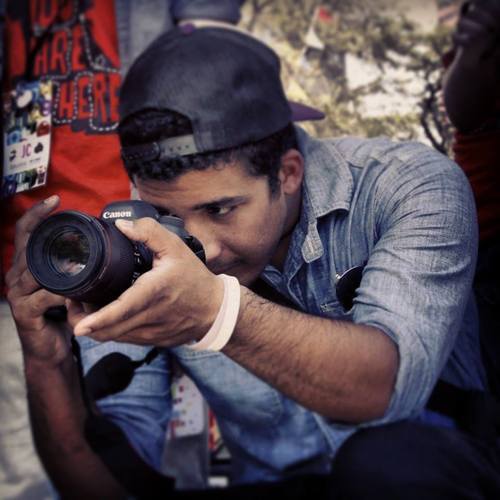 Work that Matters: the 2013 Non-Profit Career Fair is November 12th. In the lead-up to the fair, we will be featuring stories from students and alumni who did great work for a great cause. First up, Eli Vazquez (senior Film & Video Major) tells us about his experience as a board member and intern for Women in Film Chicago (which it turns out, is not just for women!).

Tell us a little about the organization you work for:
Women in Film Chicago is geared for professionals and students in the (Film, Television, Marketing, Public Relations) industries to receive networking and various kinds of workshop opportunities as well as resources to provide them a stronger foundation in making connections and expanding careers.

What were some of the main projects/initiatives you worked on with Women in Film?
At first I started as a intern for the organization where I met with and ran errands for various production and post production houses for Women in Film projects. I also helped with setting up events. Later I became vice chair for student relations where I helped put together student events and resources. On top of all that I had the opportunity to direct & produce various productions with notable industry professionals in Chicago while I was still a student.

How has the experience helped you build your resume and portfolio?
I was able to direct tribute videos for Women in Film’s honorees at our annual Focus Awards Event. On top of that I directed a series of interviews for a promotional video for Women in Film. Not only did I work with professional editors and professional cameramen in the industry who made an amazing video for my portfolio. I also made connections and the videos were seen by many professionals in my industry.

Do you want to work for a non-profit in the future? How did this experience impact your long-term goals?
I would love to always be associated with some sort of non-profit no matter what stage I am in life. This experience was one of the pivotal foundations for me to make a name for myself as not a “student” but a “professional” in Chicago with the connections and opportunities I gained within my major before I even graduated.

Why do you think students should consider getting involved with non-profit organizations?
In my situation it was a rare opportunity to do good in the community and also benefit from it in a variety of ways, but I also think even if it was not film it would still be worth it. The word “non-profit” on your resume speaks very loudly because it screams selflessness and a drive to do something on top of everything else going on in your life. It separates you from a vast amount of other candidates. On top of that there’s no better feeling than being a part of something with a group of people that is bigger than you.

Is there anything else you want us to know about your experience with non-profits?
Other than me being the only guy to ever be on the board for the organization designed for women and having a blast doing it! No, not really.

Check back for additional student features, and mark your calendars for Work that Matters on November 12th! A diverse group of non-profits from around Chicago will be recruiting volunteers, interns and employees.

We bet you’ve done some great work too. Share your jobs, internships, and volunteer experiences via our Success Campaign.