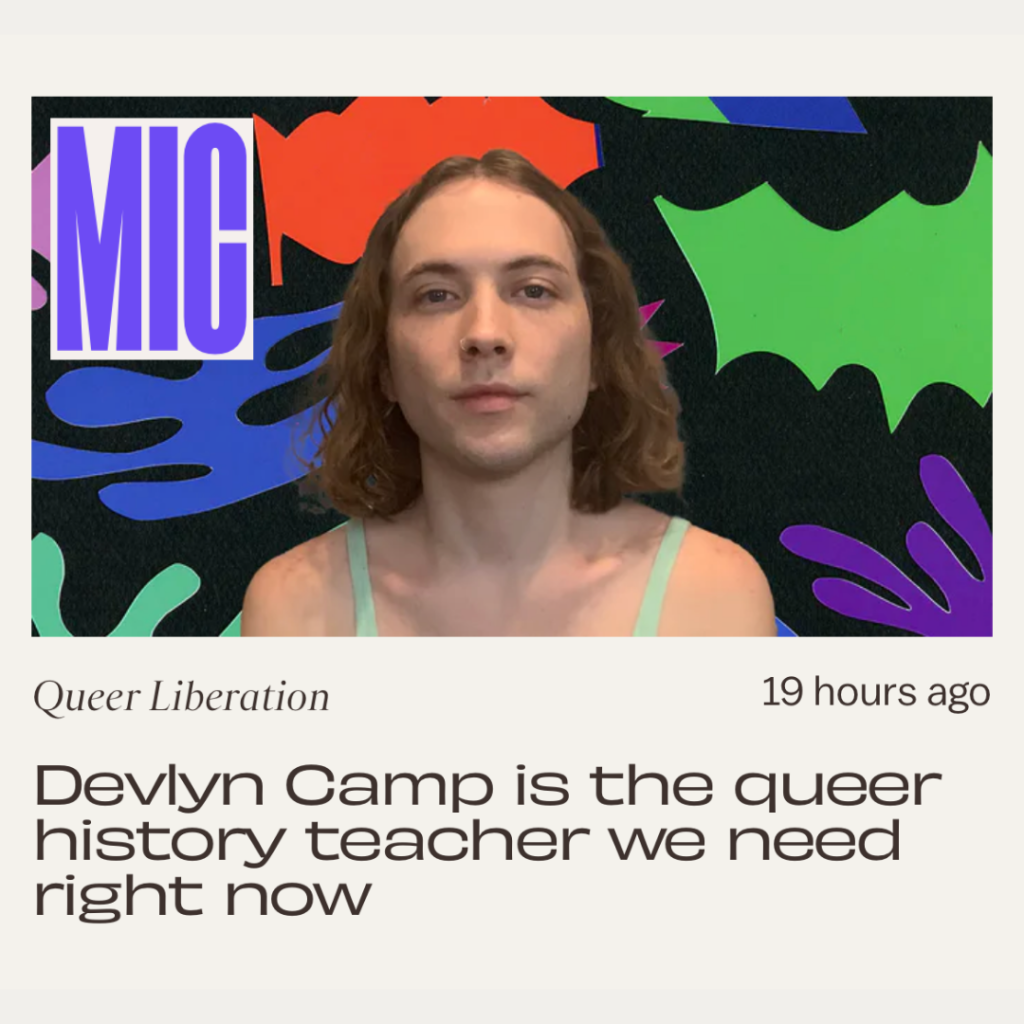 Columbia College Chicago alum Devlyn Camp ’14 — who graduated with a BA in Television Writing and Producing from what is now the Columbia College Chicago Cinema and Television Arts Department and a Minor in Acting from the Columbia College Chicago Theatre Department — is getting press attention for their new LGBT history podcast, Give ‘Em Hell, Harry! The Man Who Kept Harvey Milk’s Dream Alive, an audio chronicle of the life and work of San Francisco gay activist Harry Britt, who succeeded pioneering activist/politician Harvey Milk on San Francisco’s Board of Supervisors following Milk’s assassination by an antigay political rival in November 1978.

“Devlyn Camp Is the Queer History Teacher We Need Right Now,” declares the headline in a feature interview with Camp posted on May 26, 2022, in Mic, a youth-oriented digital culture magazine that aims “to elevate the voices of the underrepresented with authentic storytelling, original reporting, and thought-provoking content that fuels curiosity, creativity, and most importantly, change.” Give ‘Em Hell, Harry!, which debuted on May 7, is a “sister series” to Camp’s 2017-2020 podcast Queer Serial, which chronicled the LGBTQ rights movement in the U.S. from the 1920s (beginning with the founding of the Society for Human Rights in Chicago by German immigrant Henry Gerber) into the early 1970s, with the birth of the “gay liberation” movement in the wake of the 1969 Stonewall riots.

“I’ve never been much of a history buff. Honestly, I find the subject kind of intimidating; there’s just so much I don’t know. But Camp’s titillating style of storytelling hooked me on Queer Serial almost immediately. ‘Many people to tend to write off historic nonfiction as a pile of dusty old books, but queer folks in history have some of the juiciest, most fun, and surprising stories to tell,’ the 30-year-old writer and podcast producer tells me. ‘We just aren’t very aware of that because our history hasn’t been taught to us in school.’ Yes. This.” You can read the full article in Mic here. Camp — recipient of a 2021 Excellence in Journalism Award from NLGJA: The Association of LGBTQ Journalists for their contribution to the “Queer Spaces Project” published by the LGBTQ+ platform them.us — is also featured in a recent article in the venerable San Francisco-based LGBT news source Bay Area Reporter. “Devlyn Camp, a genderqueer podcaster and — as it turns out — historian, talks about their work with a bubbly, contagious enthusiasm that comes across clearly on the phone even from 3,000 miles away,” writes Eric Burkett in the May 17, 2022 article. “Calling Camp exuberant might still be an understatement. On the other hand, they have a lot to be excited about.”

Camp — the creator, writer, producer, and host of Queer Serial — was moved to share the history of the American LGBT rights movement through a canny mixture of documentary narrative and dramatization, reflecting their training in Columbia’s TV and Theatre programs. “I love storytelling,” Camp says in the Bay Area Reporter interview. “I love making sure queer stories get told. That was my happy little blend.” To read the full Bay Area Reporter article, click here. Soloway is best known as the creator of the groundbreaking Amazon original series Transparent, which focused on a Los Angeles family and their lives following the discovery that their parent is trans. Over the course of its five-season run (2014-2019), Transparent won eight Emmy awards — including two for Solowayʼs directing – as well as two Golden Globes. A video of the March 4 Zoom conversation between Soloway and Camp is posted here. The primary focus of Camp’s Queer Serial podcast is the Mattachine Society, which advocated for legal rights and protections for LGBT people in the 1950s and ’60s — a time where homosexuality was illegal throughout the U.S. and anti-LGBT discrimination in jobs and housing was widespread. Camp began researching the history of Mattachine at the ONE National Gay and Lesbian Archives at the University of Southern California Libraries in Los Angeles in 2014, when Camp was a student in Columbia College Chicago’s Semester in L.A. program, which allows students access to internships and class experiences that are only available in the Los Angeles area. After returning to Chicago in 2017, Camp continued their research at Chicago’s LGBT resource center, Gerber/Hart Library and Archives. Camp’s advisor on the Queer Serial podcast project was Columbia College Chicago alum and faculty member Albert Williams ’73. a former member of Chicago Gay Liberation, who was Camp’s advisor when Camp was a student work aide for the Columbia College Theatre Department’s Musical Theatre Program. Besides podcasting, Camp — an Evansville, Indiana, native who relocated from Chicago to New York City last year — is directing a video documentary about veteran gay activist Randy Wicker. Now 84, Wicker got his start in the Mattachine Society in 1958 and eventually went on to work and live with the late activists trans activists Marsha P. Johnson and Sylvia Rivera. The documentary is inspired by Wicker’s extensive collection of correspondence and memorabilia, some of which is archived on Camp’s Queer Serial website: click here.