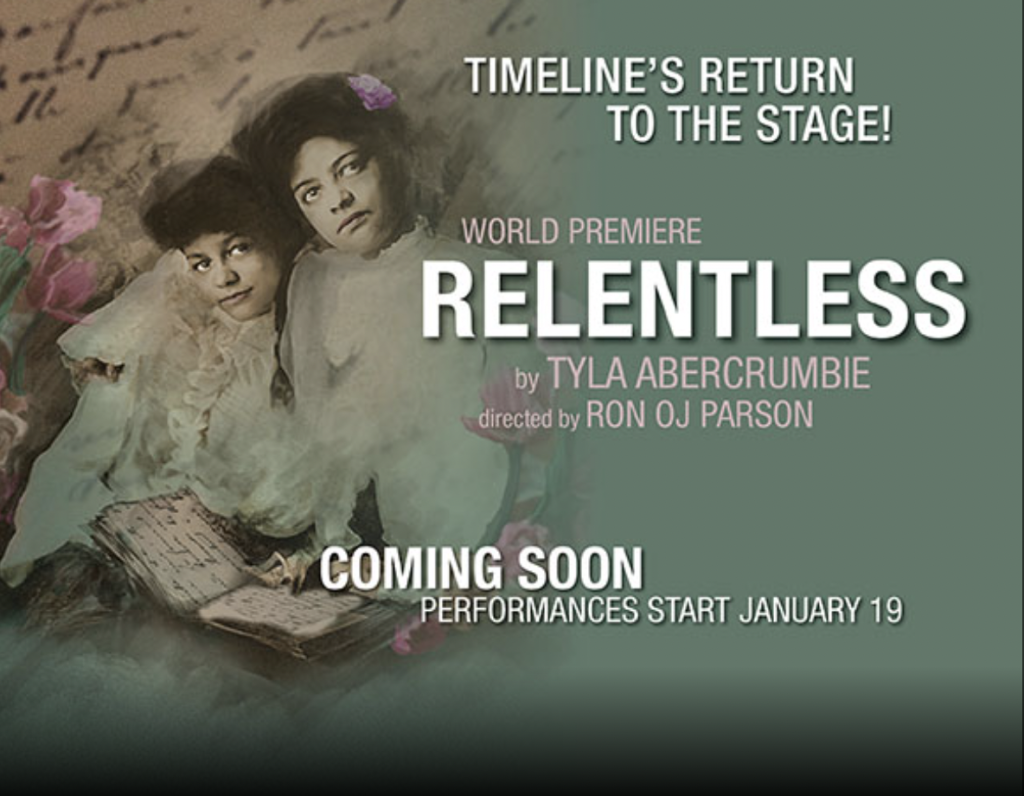 Relentless, a new play by Columbia College Chicago Theatre Department alumna Tyla Abercrumbie ’98, is receiving its world premiere from Chicago’s TimeLine Theatre as part of the award-winning company’s return to live performance with its 25th anniversary season. The production begins previews January 21 and opens January 27, with a run scheduled through February 26 at Theatre Wit, located at 1229 W. Belmont in Chicago’s Belmont Theatre District in the city’s Lakeview neighborhood. For tickets, click here. Developed through TimeLine’s Playwrights Collective, this drama by TimeLine company member Abercrumbie offers a startling and vibrant look at the secrets we keep to protect the ones we love most, weaving a mother’s past with her daughters’ present in a complicated tale of family, legacy, and progress. To see a video by Abercrumbie discussing her play, click here.

Set in 1919 Philadelphia, the play concerns two Black sisters settling their mother’s estate after her death. Annelle is a happy socialite desperate to return to the safe illusion of a perfect life with her husband in Boston. Janet is a single, professional nurse, determined to change history and propel Black women to a place of prominence and respect. Upon discovering a series of diaries left by their late mother, they find themselves confronted with a woman they never really knew, exposing buried truths from the past that are chillingly, explosively Relentless.

“I don’t know that this story has ever been told from the perspective of these types of characters, at least not in this genre,” says Abercrumbie. “Often the part of American history that is labeled Black History—specifically as it relates to how and when Black Victorians existed and were effective—is largely left out, somehow. Either it’s collectively agreed that it didn’t exist, or IF it did exist, its importance to the American landscape is deemed irrelevant or at best insignificant, and therefore a collective demand that it be forgotten or ‘gotten over’ has been nurtured and accepted. Many of the themes the characters in Relentless deal with remain very relevant today—racism, sexism, feminism, poverty, mental illness, infant mortality, police brutality. Those battles have been relentlessly fought over and over, yet here we are in 2022 still fighting against the same injustices.” As previously reported in this blog, Abercrumbie was profiled in a feature published November 24, 2021, in the Chicago Reader, Chicago’s leading alternative publication. Headlined “Tyla Abercrumbie is About More Than The Chi,” the article recounts that Abercrumbie, who grew up in Chicago’s west-side Austin neighborhood, enrolled at Columbia College after dropping out of Roosevelt University. After launching her stage career at Chicago’s ETA Creative Arts Foundation, she began pursuing TV work, eventually landing a recurring role in The Chi, the shot-in-Chicago Showtime series created by Columbia College alum Lena Waithe ’06. Today she divides her time between TV and stage, and between acting and playwriting. The production team for Relentless includes Columbia College Theatre Department faculty members Heather Gilbert (lighting designer), Mike Tutaj (projections designer), and Khalid Y. Long (dramaturg). As previously reported in this blog, Relentless was scheduled to premiere in May 2020 at TimeLine Theatre until the production was postponed due to the Coronavirus pandemic. In September 2020, the play was showcased in an online event titled “Relentless: The Journey from the Black Victorian to Black Lives Matter” as part of TimeLine’s virtual Setting the Stage public program series. An edited version of that program may be viewed at youtube.com/timelinetheatre.