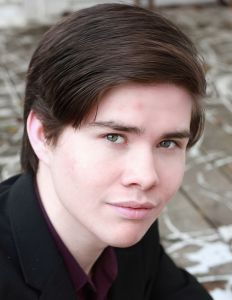 Columbia College Chicago Theatre Department alum Kelan M. Smith ’20, a graduate of the Theatre Department’s BFA Program in Musical Theatre Performance, is featured in Porchlight Music Theatre’s New Faces Sing Broadway 1987, a revue of songs from Broadway musicals that premiered in 1987. The show, which marks Smith’s debut with Porchlight, includes numbers from such works as Les Misérables, Into the Woods, and Me and My Girl. The production, which was filmed at Chicago’s historic Studebaker Theatre, is available for streaming from November 6 through 29. In an interview with the Columbia Chronicle, Columbia College’s student publication, Smith gave this career advice to aspiring performers: “There’s no one correct way [to break into the business]. Obviously, you have to get your foot in the door, that’s the most important thing. So showing up to audition for [shows] is kind of a necessity. Otherwise, getting your foot in the door anywhere really is a good step—auditioning for everything you can in the city, trying to get yourself out there so that when you’re going into the audition, ideally people behind the table already have a sense of who you are and can see the work that you’ve done. And just making sure that you’re somebody that people want to work with is a big thing.”