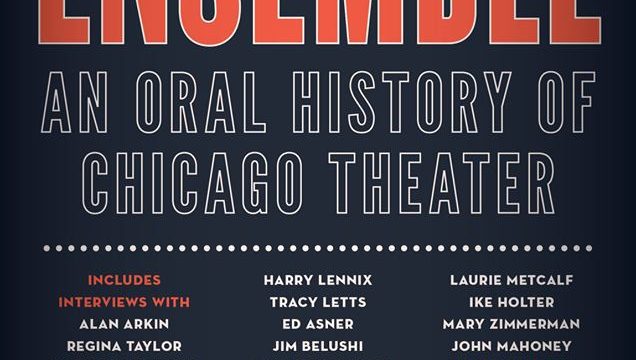 Numerous alumni and faculty of the Columbia College Chicago Theatre Department are featured in the new book Ensemble: An Oral History of Chicago Theater, being published August 13, 2019, by Chicago-based Agate Publishing.

Authored by oral historian Mark Larson, the book chronicles the development of a grassroots professional theatre movement in Chicago following World War II through the personal stories of those who participated in the Chicago theatre movement. This in-depth, first-of-its-kind history of Chicago’s internationally celebrated theatre scene spans 65 years, told through first-person accounts from the people who made it happen. The Columbia College Chicago Theatre Department figures prominently in the narrative — for good reason, Larson explains:

“If you look at a list of Columbia College theatre graduates now working in the field, it is not only quite impressive in numbers — though there’s that, too — but also in terms of the graduates’ impact on theatre nationally and internationally,” says Larson. “As I interviewed Chicago theatre artists for my book, their time at Columbia (both as students and sometimes later as instructors) was often a subject of conversation. Because Columbia is so firmly based in practical experience and the courses are taught by practitioners rather than theorists, the results are perceptible and indelible. Columbia has a knack for getting their students out into the theatre community and bringing the community and its luminaries to the students. It should not be surprising that so many brilliant careers were spawned there.”

Cromer, like many people interviewed for the book, cited the late director and teacher Sheldon Patinkin, chair of the Columbia College Theatre Department from 1980 through 2009, as a major influence in Chicago theatre. Besides chairing the Columbia College Theatre Department, Patinkin was a teacher and director at both The Second City and Steppenwolf Theatre Company, two of Chicago’s leading theatres and training centers. In an interview published on the Ensemble companion website, Cromer recalls: “The reason that so many of us got connected to theater in the city really early was Sheldon Patinkin hired all these actors to teach. I had, as instructors, [Steppenwolf ensemble members] Tom Irwin and Jeff Perry and Rondi Reed, and all those people who, in one way or another, later gave me jobs. Sheldon gave me acting jobs in real shows while I was there as a student. So yeah, Columbia College changed my little life.” You can read Cromer’s interview here.

Because Sheldon Patinkin died in 2014, Larson never had a chance to interview him for the book. “The more artists I talked to, the more acute was my regret,” says Larson of being unable to interview Patinkin. “He had been there at the beginning of the Chicago theatre movement in 1953, working lights and occasionally playing piano for Playwrights Theater Club at the age of 17. His influence traversed the entire movement’s history and reached into every aspect of this extraordinary artistic community. Although he has been gone five years now, the Sheldon Effect continues.”

Also interviewed for the book was Columbia College Honorary Doctorate recipient Jim Jacobs HDR ’14, benefactor of the Jim Jacobs Musical Theatre Scholarship at Columbia College. Jacobs is coauthor of the hit 1971 musical Grease, a landmark show in the development of Chicago theatre.

The Jane Addams Hull-House Museum, located at 800 S. Halsted in downtown Chicago, will host a book launch reception for Ensemble: An Oral History of Chicago Theater with Mark Larson on Monday, August 12, 2019, from 6 to 8 PM. For more information, click here.