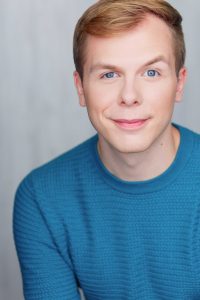 Columbia College Chicago Theatre Department alumni Tyler Anthony Smith ’17, Abigail Phelps ’15, and Carson Schroeder ’16 are featured in the world premiere of Smith’s comedy Mein Comps, running October 23-25 at Strawdog Theatre, 1802 W. Berenice, Chicago. Showtime is 8 PM Monday, Tuesday, and Wednesday. Tickets are $12 general admission, or $9 for persons 30 and under. For tickets, click here.
Mein Comps is a new play about a certain dictator selling discounted theatre tickets. It’s just another typical day for Adolf Moira Angela Hitler. Hungover. Sore. Constantly on the phone, dealing with fools who want orchestra seats to Cats at bargain prices. But wires are crossed when a mysterious customer from a month ago wedges his way into our fabulous trainwreck of a leading man’s heart. Will Mademoiselle Hitler end his streak of sleeping around and settle down? Will he sober up in time to remember that today’s the day he has an audition for the role of Amanda in yet another revival of The Glass Menagerie? 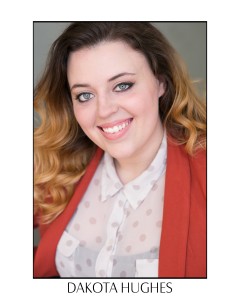 Tyler Anthony Smith, the playwright, also plays Adolf Hitler. Abigail Phelps, who plays Chava, is also the show’s director. Carson Schroeder costars as Bobby Bowen. Smith, Phelps, and Schroeder are all graduates of the Theatre Department’s BA Program in Acting, and Schroeder has a Minor in Stage Combat. In addition, Columbia alum Dakota Hughes ’15, a graduate of the Theatre Department’s BFA Program in Musical Theatre Performance, is the show’s production manager.

Smith was inspired to write this metatheatrical comedy by a quote from the real Hitler: “It is not the mission of art to wallow in filth for filth’s sake, to paint the human being only in a state of putrefaction, to draw cretins as symbols of motherhood, or to present deformed idiots as representatives of manly strength.”