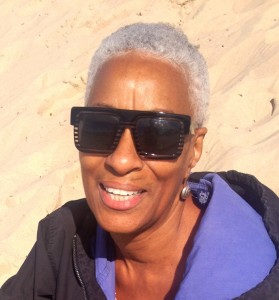 The Ruby Prize is presented annually to a woman playwright of color. The award carries a $10,000 cash prize, a workshop and reading of Jones’ play in New York City, and a ten-day writer’s residency at Hedgebrook, a nonprofit literary arts organization that supports the work of visionary women writers. The Hedgebrook writers’ retreat is located on Whidbey Island in Washington State. Jones is Assistant to the Chair of the Columbia College Chicago Theatre Department, a position she has held since 2010. She wrote and produced print and broadcast advertising in Chicago and New York before pursuing her interest in theatre. She has directed mainstage productions at the Actors Theatre of St. Paul, Penumbra Theater, At the Foot of the Mountain Theatre, the Women’s Theatre Project, and Starting Gate Theatre in Minneapolis and St. Paul, where she was also the founder and artistic director of Alchemy Theater. She studied film production at The New School in New York City, which led her to produce and direct music videos for Motown, Tabu, Flyte Time, Warner, and Paisely Park records. Her screenplay Man of the Word won Best Screenplay at the 2008 FilmColumbia Festival in New York. She received an MFA in Creative Writing with emphasis in Playwriting from Goddard College in 2014.

Jones’ drama A Heap See, written as her master’s thesis project for Goddard College, concerns Koua, a young Hmong mother of six, who has immigrated to Minnesota after living for years in squalid Thai refugee camps. Her determined efforts to give her children all the tools for success are constantly challenged by her husband and his family. As Koua’s family life becomes more violent, her next door neighbor, Anita, is torn between calling the police, offering Koua sanctuary, or minding her own business.

The Ruby Prize is named in honor of American activist Ruby Bridges Hall, chair of the Ruby Bridges Foundation, which she formed in 1999 to promote “the values of tolerance, respect, and appreciation of all differences.” As a child in 1960, she was the first black student to attend an all-white elementary school in Louisiana during the 20th century–a landmark event memorialized by painter Norman Rockwell in his iconic painting The Problem We All Live With, published as a centerfold in Look magazine in 1964.