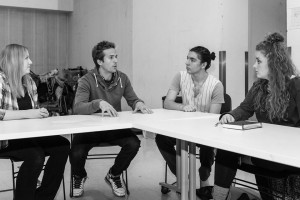 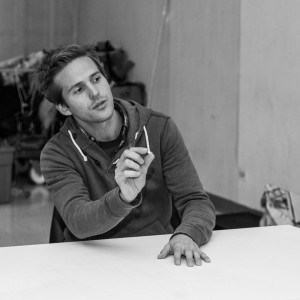 Actor Michael Stahl-David (BA ’05), a graduate of the Columbia College Chicago Theatre Department‘s BA Program in Acting, visited the Theatre Department on November 20 to facilitate a workshop for students in the acting program. Stahl-David shared his industry expertise with the students, offering career advice and acting tips drawn from his experience as a stage and screen performer. His visit to the campus was facilitated by the Theatre Department’s Acting Program coordinator, Jeff Ginsberg, and Jonathan Stern, the college’s Vice President of Development and Alumni Relations.

Stahl-David’s recent projects include the TV movie Just in Time for Christmas, in which he co-stars with William Shatner and Christopher Lloyd. The film airs on Saturday, December 5, on the Hallmark Channel. He is currently filming LBJ, director Rob Reiner’s drama about President Lyndon B. Johnson, in which Stahl-David co-stars as Johnson’s political archrival Robert F. Kennedy. Stahl-David’s other credits include the film Cloverfield, the TV series The Good Wife and The Black Donnellys, and numerous stage productions in Chicago and Off-Broadway.