Jackalope Theatre Company, a collective founded and led by Columbia College Chicago Theatre Department alumni, has announced a new initiative to “cultivate bold new theatre in Chicago,” according to an announcement. The Pioneer Series, hosted in Jackalope’s newly upgraded storefront studio The Frontier, will present a season of work produced by guest theatre companies for a primetime four-week run. Jackalope is seeking proposals for plays that are Chicago premieres, with flexible technical requirements, and with a focus on intimate storytelling. Jackalope is interested in working with diverse teams of actors, directors, and designers who see spacial limitations as something that sets them free. The Frontier is located at 1106 W. Thorndale in Chicago’s Edgewater neighborhood.

“We are so excited to discover perspectives and voices that are new to Jackalope and to Chicago, and to provide a platform of support for companies and writers to explore daring and innovative storytelling,” says Jackalope artistic director A.J. Ware. “The Pioneer Series will be a home for innovators, and we are thrilled to give Chicago theatre artists a safe place to take big risks.”

“Jackalope has come a long way since our founding, but not without the support of those who believed in us and the producing opportunities they provided,” adds Jackalope associate artistic director Kaiser Ahmed, who oversees the Pioneer Series application process. “The Pioneer Series is a small way for us to give back to the loving and vibrant Chicago Theater community that has kept us inspired.”

Selected companies will receive artistic and administrative support from Jackalope, as well as an affordable rental rate for their rehearsals and performances in The Frontier. Applications are now being accepted for the 2015-16 season, beginning in the summer of 2015. Companies can go to  Jackalope’s website to learn more about the series and the application process, and completed applications can be submitted to thefrontier@jackalopetheatre.org.

Jackalope was co-founded by Ware, Ahmed, and fellow Columbia College Chicago theatre student Gus Menary in 2008. That spring, the three senior directing majors joined together in a class project for their Theater Management Techniques course. Their assignment was to create a fictional theatrical production company. The project went so well that they decided to make their project a reality, and that summer Jackalope Theatre Company was born. Since that time, Jackalope has evolved into a dynamic, respected arts organization. 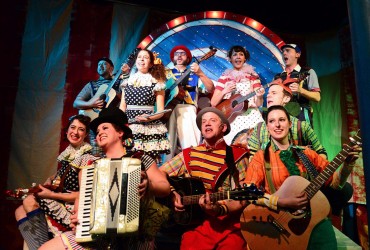