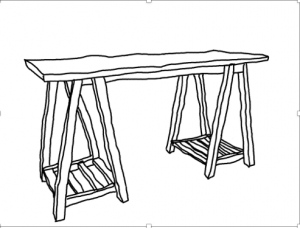 I moved into my first apartment in Chicago, and became a real writer. Being a writer had certain conditions that absolutely had to be met. I needed a place—secured. I needed a desk and a chair. The desk I wanted flat and long, like a workbench. I know what I’m looking for before I see it, and I know that it’s right when I find it.

This desk was in Logan Square for twenty dollars. I needed a ride and asked Ricky, a comedian that I had been seeing, but not dating. I was seeing several guys at the time. Ricky drove me to the stranger’s apartment across from Palmer Park. The man couldn’t have been older than mid thirties. Attractive, wearing a green t-shirt. I always save the numbers of people I buy things from on Craigslist and I don’t know why. His name was Rob—Rob (desk) in my contacts.

I also have the number of a guy I bought liquor from once back when I lived in Ann Arbor, another member of metal frat, the anti-frat fraternity where I sometimes went to house shows—Joe Laser (koo), someone named Emily—Emily (goldfish mom), and someone simply named—plant.

Rob and Ricky carried the desk down three flights of stairs while I followed behind uselessly. They put the desk in the trunk of Ricky’s car. While Ricky and I sat in the front seat, the desk in the back, I took a photo of Ricky while he wasn’t looking. He was wearing a green quilt-print shirt, his hair was still buzzed to a three, and his hand looks long and spidery. I posted the picture on my Instagram with the caption my favorite cutie even though I had told him we were nothing to each other and would insist so for weeks after.

He carried the desk up to my apartment in the cold back stairway all by himself, on his back. The desk was without a chair for a long time. I knew what I was looking for before I saw it, and it was hard to find. Once I found it, it was hard to get.

The right kind of ugly, this velvet gold floral ugly, could only be found in the suburbs for ten dollars.

I needed Ricky to drive me but he kept bailing. He knew how important this chair was to my artistic sensibilities. Three times he bailed, and three times I apologized over email to a stranger from Craigslist that I had let them down.

I was mad at Ricky for a while. A while later, I lost a friend over this chair. I apologized to the Craigslist seller more times than to the friend. The couple from the suburbs offered to drop the chair off to me in the city for an extra ten dollars.

A twenty dollar chair. I was in the back trapeze-like stairmaze connectors of my apartment building, taking headshots for a comedian from one of my gen ed classes when the couple arrived. The comedian was wearing conversion glasses that changed into sunglasses in the sunlight, and he kept running from the shade and back, trying to get a good headshot with his glasses on before the lenses darkened again. I gave the couple twenty dollars and they left the chair on the sidewalk in the front of my apartment. The ugly, velvet gold floral ugly, chair blocked the front door to the high-priced Italian restaurant that I lived above. The chair was both an armchair and a rocking chair. The woman told me she breastfed both her children in the chair. She hoped I liked it. I did.

The comedian wrapped both arms around the heavy chair, bent his knees and angled his back parallel to the stairs, and singlehandedly hoisted the chair up into my apartment and into my room. He never paid me for the headshots, but I never carry my own furniture. It’s about the way I cry, not why I’m crying—crying is a ritual in release. This day, I dragged my comforter, wrapped around my shoulders and trailing like the train of a gown behind me, into the bathroom, where I curled up in the dry bathtub. Already in place were my laptop, my phone, and a glass of water—the last, I knew I would not drink.

The ritual of crying is a loud one, which is part of why I perform it in the bathroom. Besides the tub being small and snug, with my toes dancing under the spigot, my knees bent like anthills, my bathroom has a fan that drowns out sound. As I cry, I put on a mindless Netflix show and text as normal.

My mom texts me a picture of a dish of food on the table before her. Guess where I am.

Why? I text back.

She’s at the Golden Bowl, my favorite Chinese restaurant as a kid—a place my parents told me was a hole in the wall.

The waitress asked about you.

How do they remember us?

How do I know? I guess we left a huge impression.

I don’t think we were ever all that extraordinary to them.

I want to ask her to ask for an extra fortune cookie, so that it can be mine. I want to ask her to crack it open and tell me what the piece of paper reads inside. I want to tell her that she has to eat the whole cookie afterwards so that my fortune can come true. I heard recently that in order for your fortune cookie fortune to come true, you have to eat the entire cookie to seal the deal, even if it’s one of the bad styrofoam ones. You have to trade the cookie closest to you with the cookie closest to the person with you.

I told this to Ricky last week, after we finished our udon on a dinner date and the cookie came on top of the bill. He wouldn’t trade with me. I read my fortune and as the cracked shells sat on the table before us, he set his fortune down and smashed the four cookie halves into tiny pieces, so I couldn’t tell whose cookie was chose, and I couldn’t seal my fortune.

“Why are you such an asshole?!”

He sat, cowed, and I, in an attempt at a good humored response, but also having a compulsion to follow superstition, shoved all the pieces of both cookies in my mouth, filling my cheeks up like a chipmunk before chewing. It was like playing chubby bunny with styrofoam instead of marshmallows. The cookies were the bad styrofoam ones, and my fortune was grammatically incorrect. I still wanted it. As we walked out, Ricky said that I didn’t have to call him an asshole so loudly in front of everyone in the restaurant.

I bought a deck of tarot cards a week after Ricky and I talked about crystals and cards and fortunes and he said if I believed in all that stuff that we wouldn’t be together. He doesn’t mean it like that, though.

The next time we got fortune cookies after dinner, he let me trade with him and he let me eat my cookie halves, whole, and then eat his too, and then we played the lotto.

I want to order a train ticket home and go to the Golden Bowl and order a bowl of sherbet ice cream, the kind with a pink stripe, an orange stripe, and a yellow stripe, and I want to break my fortune cookie halves into shards and dip them into my ice cream, collecting a rainbow scoop in their sharp curves, the way I used to as a kid.

I don’t ask my mom to get an extra fortune cookie for me, but I do ask Ricky to come over after I get up out of the dry bathtub with a still-wet face.

I lay in my bed under the covers and he sits at my side, cross-legged and with the kind of concern on his face that makes me want to cry, and his glasses are off, and he rubs my temples until I can’t feel my migraine, all I can feel are his hands.

☺ Your love life will be happy and harmonious. ☺

You will always have good luck in your personal affairs.

Below these, I wrote:

packaging that comes on a set of

kitchen knives and is impossible to get off.

Zoe Raines is a Detroit native living and writing in Chicago. Her work has been previously published in Hypertext Magazine and is forthcoming in Habitat Magazine.