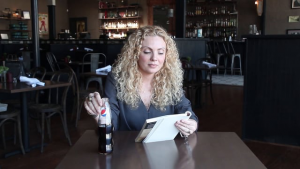 What bothers me is she was beautiful—the possum, that is, young enough to still barnacle to her mother’s back—a baby, really, even though the word seems ill-fit for a hissing thing designed to grow a bite of fifty teeth made to sink into slugs and frogs and field mice.

What bothers me is she was beautiful—shining, even. Yanked from under the porch by our dog with his curious snap and shake, she was slobber-matted as one of his flung toys, but she was a glistening thing for the sun. She was on her side, and the few breaths I saw her take were pillowed, all sweetly abdomen, not unlike a kitten dreaming a nest of unspooled yarn.

We hoped she was only playing—possum, that is—only waiting out a spell until our dumbly vicious dog forgot her and lazed in the heat. So we waited with her. One hour. Then two, then five. And by the time too much time had passed, we knew that if she was playing it was only that game we are all forced to one day play.

Her open mouth had become a room crowded with buzzing jewels, each common bottle fly an impossible emerald frantic with the search to be the first into the soft and liquid cathedral of her body. It bothered me, all that beauty, that iridescent song, and so I bagged her up and threw her away.

Nickole Brown’s books include the collection of poems Fanny Says (BOA Editions, 2015), Sister, a novel-in-poems (Red Hen Press, 2007), and the anthology Air Fare: Stories, Poems, and Essays on Flight (Sarabande, 2004), which she coedited with Judith Taylor.