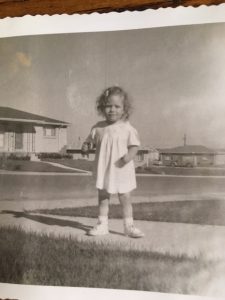 Sitting on a trunk under the basement stairs, I slit through duct tape with my Swiss Army knife, boxes of albums sealed since I mailed them to myself ten years ago when I cleared out my mother’s apartment. She saved our memories. I worked years to erase them and could have just chucked them out with all the other garbage she’d accumulated. But still. The only thing I couldn’t throw away: her chronology of our past, yellowed pictures, pages falling out. Now, the unwilling keeper of memories, I’ve promised my sister’s husband to find pictures of her as a child, a young girl. At fifty-seven, she’s dying. We sit beside her bed in the nursing home and he thinks of the pieces of her past he never knew. I think of the present. How many more days will she suffer? Why am I drawn to fly between D.C. and Colorado every week for almost four months now to witness as she moves out of her life?  She’s all I can think about. Back home for a few days, I open boxes to fill a promise I made to Gary.

I slip pictures out, imagine my mother carefully dating them before she licks the black picture holder corners and slots photos in.  Did she cry at the pictures of Janis, a moment preserved of her child who was so sick?  I slip pictures out, leave black gaps.  Gary asked, what did she look like fifty years ago, as a teenager, before the diabetes took over completely?  His birthday is soon though Janis won’t be there and I’m the only one who can give him an answer, complete his memories.  She was pretty.  She was beautiful.  Back in the nursing home, I sit on Janis’s bed, turn pages in the tiny album of pilfered pictures for Gary, tell her again it’s for his birthday.  She stares past the pictures, gazing through the muck of dementia.  She’s lost her past, soon, her present.

At two, grinning by the swing set, she wears only a diaper in the hot Colorado summer, her hair a curly mop—at the end of that summer the diabetes attacked and she spent weeks in the hospital.  My mother said when they brought her home, her curls were gone.  I remember my mother wringing out diapers for the urinalyses, every few hours day and night.  But no matter how often she tested, Janis sometimes went blank, shaking, pale.  I knew to run for juice and a spoon to hold her tongue down for the convulsions.

At five, she flies down our hill in a wagon, wedged between a neighbor kid and me, arms thrown up in delight, laughing at the camera. Her eighteenth birthday, just family, Janis turned slightly away to hide her glass eye, another loss to diabetes. Her first wedding, porcelain skin aged even then, but still beautiful, radiant. There’s my brother, not me, in the wedding photo. Janis on the floor with my daughter, a rare visit home I’d made, reaching out her hand to help Julia walk. Christmas, Janis laughing, wearing one of her horrible Christmas sweatshirts, holding a fluffy white dog.

When Gary arrives I want her to hand him the little album, say Happy Birthday, but she looks so confused, I do it.  Gary cries as he thumbs through. Janis goes to sleep.

Thirteen simple years together: car shows, garage sales, model train exhibits.  Gary’s house a mess of glass trinkets Janis collected, velvet wolf paintings, glamour shots Janis bought for anniversaries and birthdays. During football season she dressed head to toe in Bronco’s gear to watch the game on TV—no money for actual tickets.  he took pictures of the TV game, her favorite players, and kept them in special albums. When she died, Gary buried her in Bronco socks. Their treats: outings to Denny’s; maybe gambling nickel slots in Blackhawk if there was a spare ten dollars at the end of the month. One time, a trip out of town, to Kansas to visit Gary’s aunt, Janis scared and excited. Leaving home was hard for her.

She had a temper. She imagined Gary’s slights, feared he’d leave her, provoked fights. I get weepy, hysterical calls which I screen, the message always some variety of: Gary is kicking her out. She has no place to live, no money.  She called because she trusted me, needed someone to listen, be the friend she didn’t have. Sometimes I answer, mostly not. Eventually, she stopped calling, waiting instead for my holiday guilt calls, always happy to hear from me.

The January night he left her at the hospital, Gary called my brother crying. We hadn’t known, but for months she’d been getting lost in the house, waking Gary up to show her where the bathroom was, forgetting what they were watching on TV, forgetting to go to dialysis.  A lifetime too late I flew to Denver. In four months I spent more time with her than since we were teenagers forced to share a bedroom. She was never surprised when I showed up, always recognized me, even with the dementia. I was back.  Late.

She raged, even as she died. Sometimes she insisted Gary played tricks on her, locked her behind the raised bars of the bed. She hunted furiously for the key he’d hidden so she could get out, go home. The nursing home rigged a giant cage for her, a bed surrounded by netting, until I stopped them. They tied her hands to the bed.

On Monday, she wouldn’t let anyone in her room except Gary, so he sent the hospice nurse away—the one person who could have told us she was near the end. By Monday evening when I came to spell him, Gary was outside her door, leaning on his cane. Janis said she wanted everyone out of her room, there were too many people, though there weren’t any. But she let me in.

I took the Tuesday watch, thinking to go home for a few days Wednesday. It’d been two weeks since she’d stopped dialysis but she was fiercer than ever. I’d give Gary a little time off to play poker with his buddies before I left again.  At nine, when I got to the nursing home, Janis was asleep. I touched her hand; she woke up, said “Hi Barb,” and dropped back to sleep. I lay on the other bed reading. Around eleven, when she hadn’t stirred, I moved to sit beside her, to stroke her forehead and talk to her, to let her know I was still there. She felt different. When the breathing specialist came to check her trach tube, she asked, as she ran out of the room, “How long has she been breathing like this?”  Five nurses came, the first time I’d seen the head nurse.  She listened to Janis breathe, turned up the oxygen, told me to call Gary and my brother and hospice.

Gary’s poker game went on without him. My brother came, and hospice, and Gary’s kids and grandkids. The room was crowded, but by then Janis didn’t know. She labored until sunset.  She had been so beautiful.

Barbara Churchill lives and writes in Bethesda, Maryland. She has published creative nonfiction in Soundings Review, a print magazine, and online in Pen In Hand, a journal of the Maryland Writers Association. She has been a teacher and writer for many years and is just now finding serious time to devote to writing. 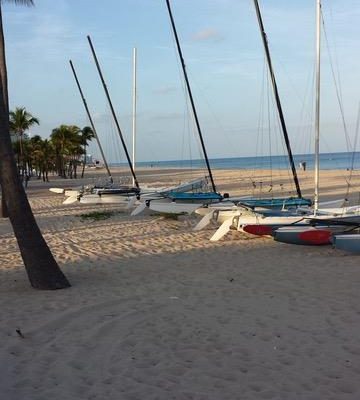 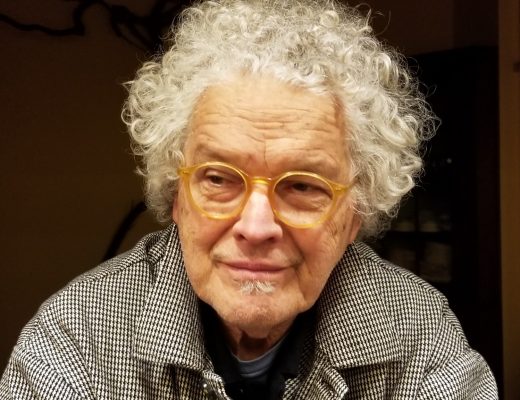