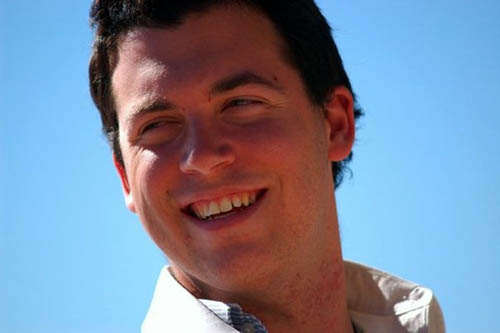 I have been interested in film music since 7th grade, after I watched Conan the Barbarian. After writing music on a MIDI sequencer for all of high school, I majored in music composition at Occidental College in Los Angeles and graduated in 2008. While there, I worked on over 30 films ranging from undergraduate projects to Masters thesis films, including a parody for the MTV Movie Awards. As part of my senior concert I conducted both the glee club and orchestra playing original works. I stayed in LA for two years after graduation, working first as an orchestrator for Stephen Endelman on the 20th Century Fox feature Street Fighter: The Legend of Chun-Li. In those two years I worked with a writing partner on a dozen projects, including films that are currently featured in film festival and online forums. Since film music doesn’t offer steady employment, I also work as an arranger/copyist for a classical guitarist named Stuart Weber (http://www.stuartweber.com/). Our latest collaboration was featured on PBS.

I chose Columbia College because it offered what I think is the best option for getting a graduate degree in film music composition. USC’s program is certainly prestigious, but is only one year long and does not offer anything higher than a graduate certificate. I don’t believe a single year is long enough. NYU’s program offers a Masters degree in music and is two years long, but is confined to New York City itself. We are training to work in an environment that operates the majority of the time in Los Angeles. Columbia College’s program offers a Masters in fine arts and is two years long. The kicker for me is the Semester in LA program, which immediately follows graduation. During this summer semester we intern for high-level film composers, take additional classes centered on the business application of film music, and work with a studio orchestra to record our thesis scores. These three elements serve as a bridge between the academic and professional side of film music, which made Columbia College the obvious choice for me.

I am currently working on a couple of projects. I am part of the music team for a project called 228: The Life of a Positive Person. It is a 25-part web series (http://228film.com) based off the blog of man who started it the day he was diagnosed with HIV. It is a beautiful and personal story, told through two different perspectives. A new episode will stream once a week. It is a fun and different type of work, since our schedule is episodic in nature. I am also writing the music for a feature trailer out in Portland, OR called Free Box Frank. I am collaborating with another member of my program who is doing the sound design for the trailer. I scored a film for a graduate student last semester, and am reexamining the role of the music now that the festival cut as been edited together. As always, I continue to arrange pieces for classical guitarist Stuart Weber whenever he collaborates with other artists. Most recently he played a concert with the wonderful violinist Angella Ahn. I am always looking to collaborate with new people, so if you need music get in touch with me!