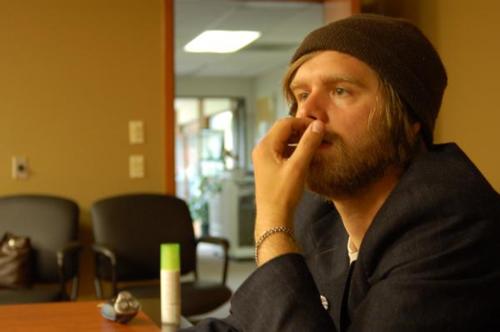 My journey to Columbia College Chicago has been long, with a few detours. I grew up 20 minutes north of Seattle, but I lived in Bellingham, Washington during most of my twenties. There I finished my BA in Creative Writing and an MA in English at Western Washington University. During my time in Bellingham, I toured in bands and made films and worked. I applied for MFA programs at the end of my first year of graduate school. I got into four MFA programs. The best cash-cash-money (at first) came from NMSU, and so I accepted, but a day after I accepted, I got into CCC with funding. I didn’t know I could call NMSU and say, “Peace out!” I didn’t know the etiquette.

But I’m glad I went to Las Cruces (I say this in retrospect).

I knew right away that New Mexico State wasn’t right for me. Yes, it had some amazing professors and talented students (who I call friends), but it was too laid back and I couldn’t stand the town! My mentors at WWU suggested I contact CCC. I emailed Tony Trigilio, and he remembered me. I reapplied.

I didn’t know if I was in or not until I was visiting Chicago with my wife. We were meeting with Tony, and he started talking about working together. I looked over to Emily and said, “Well, I guess I’m in!”

We planned to move out that summer. But at that time, Emily was newly knocked-up. We decided that I would defer and we would have our baby in Seattle around friends and family. During that time, I taught Composition and worked in a hotel. By August, I was ready to get back to it.

Honestly, when looking for schools, I picked Columbia because it was in Chicago. And when I went to the website, it stuck out. Of all the other schools I looked at, this one had style; it was cool to look at. I had this thought: I want a school where the website is cool enough to match the talent, the program, and whatever else I want to people to know. When you send someone to a band site of a friend and it looks crappy, they probably won’t bother listening to the music. I already knew the faculty was top notch, I knew that the students were diverse, and I knew that I would be at the epicenter of Chicago. I wanted a school that was tapped into the community around them. I wanted a school that promoted community, rather than unhealthy competition. I wanted a school that helped prepare us for life after graduate school. So far, all of these expectations have been met (and more). My fellow students are extremely talented and diverse (we all write drastically different work, which allows us to inform and critique better than a bunch of folks writing exactly the same way). The faculty is supportive and always available. The school itself promotes community on and off campus.

Above all, I came to Columbia College Chicago to be challenged and to find a vibrant, supportive community.

If you know anything about me (and I’m guessing only some of you do) you know that I always have numerous projects going at a time, and not just poetry. I also have prose and film projects, among other things. This is how I work. I need the ability to move between projects at different stages. It keeps everything fresh.

The project that currently sits in front of me is called DIY. It will be my thesis. The project is about early 1980s hardcore punk, set in Seattle. I started thinking about it two years ago and started working on it (really working on it) in Lisa Fishman’s workshop my first semester.

There were a few cities with booming hardcore punk scenes across the US during the genesis of hardcore (before it started evolving and really growing into what it is now), and one of them was not Seattle. However, I grew up going to shows (houses, clubs, youth centers), and I saw the product of DIY punk of the 80s, after the fact.

I invented a scene revolving around a fictional all-ages theater turned venue on University Ave near University of Washington. There were bad kids and there were good kids. There was rampant homophobia, racism, and sexism, among other things. But in the end, there’s one fact that propels this projects forward: There were kids who just wanted to be a part of something important, and at the core of it was music. The music brought everyone together.