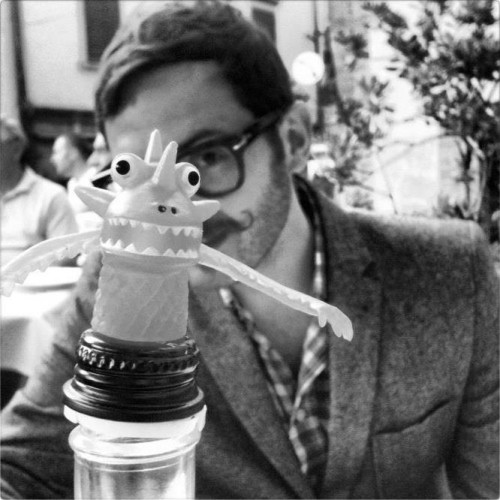 Before coming to Columbia College, I spent a lot of time filling out change-of-address forms. I spent the longest segment of that time in Atlanta, where I dabbled with my own personal chef gig and began an MA program for Literature at Georgia State University. I’m from Georgia originally. In 2010 I took a hiatus from the program to serve as the Visiting Artist for the University of Georgia’s Study Abroad Art Program in Cortona, Italy. That’s where I started writing poetry. After that, everything changed. I moved to Milwaukee, where my girlfriend was from, and started researching MFA programs while I wrote my graduate thesis for GSU. In the spring of last year (2012), I went to Paris on a GSU graduate exchange and completed my MA. I would wake up in the middle of the night and get online to see if I’d gotten in any of the schools I applied to. It was like 4am and, though I hadn’t heard anything from Columbia College yet, I signed in to the Bulletin Board to see if there was any change in my application status. I was then given a prompt asking if I wanted to RSVP for the Admitted Students day, and I thought, Yes I do!

I would say that my decision to attend Columbia College began with a dream I had: I am riding my bicycle on the interstate and then stop for a moment on the shoulder, I don’t know why, probably to Instagram, when a large delivery truck comes peeling around the corner and hits me, sending me hurtling into the glass wall of a skyscraper. I am on my knees, glass falling out of my face. I get a glimpse of my reflection in a remaining part of the slate black window and see that when I blink my eyes, shards of glass have slit my face into what looks like diamonds. I spit, and the glass trickles out into a puddle. Imagine the sound of a room full of scissors. The next thing I know, I am walking through a shiny metallic hallway that, at some point, becomes clear to be a hallway at Columbia College Chicago.

But that just sounds crazy.

So instead I’ll say that the decision began in an ancient Italian hill town that was built by the Etruscans, whose shots were called based on the flight patterns of birds and the scrutinized entrails of sacrificed animals that were then divvied up among the priests for high fives and a potluck dinner.

During my time as the Visiting Artist in Cortona—the Etruscan hill town—I was surrounded by artists of all genres and mediums. I had the opportunity to learn paper and bookmaking, printmaking, and even some stone carving! My experiences with non-poet artists made me realize how integral our fields were to each other, so I knew I wanted to go somewhere with a strong arts background. I later visited Chicago for Printer’s Ball while I was living in Milwaukee, and I knew then that CCC was where I needed to be.

My friend Darin Beasley once said, if wherever you are doesn’t have something you can stick your hands in, then how are you gonna find love? For me that means you’ve got to keep busy and stay involved. Right now I’m sending out one finished manuscript, revising and ordering another one, and starting on what I think will become my thesis project—a series of poems dealing with a double murder in a pea patch just outside of my hometown in 1930. I’ve spent the summer going through old VHS home videotapes and re-appropriating some of the footage for poem-films. And what I’m super excited about is being asked to come on board as a co-curator for a new Chicago-based art cooperative and performance series called The Swell. It’s gonna be huge!