Amidst the chaos of preparing for the end of the semester comes the all-too-brief but definitely welcome break for Thanksgiving. This year, after feeling the weight of all my responsibilities in school, work, home, and my burlesque show for over ten weeks, I escaped to a remote plot of land in Plymouth, Michigan with my best friend and collaborator Katina (see my previous post about our monthly rock n’ roll-themed burlesque show) and her husband David. Katina rented the car and drove, while I navigated via Google Maps and curated the tunes (and David nursed a recently sprained ankle in the backseat). Our destination was her childhood home, set in quaint woods about a 20-minute drive from Ann Arbor. Our intention was to eat massive amounts of her parents’ delicious home cooking and to relax in the tranquil expanse of their family property. But, as collaborators and art makers, Katina and I also had other plans. 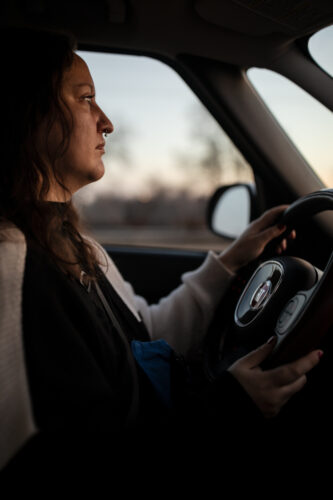 driving to Plymouth at sunrise on Thanksgiving Day 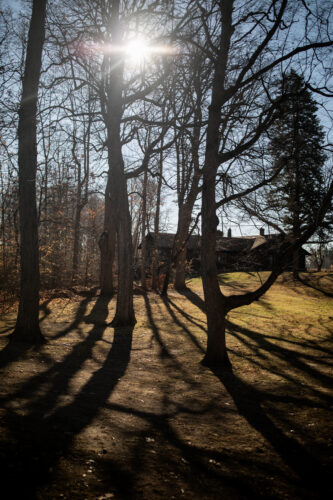 standing in the yard of Katina’s childhood home, looking out toward her grandmother’s house next door

Recently, the visual work I’ve made while progressing to my MFA has pivoted to a focus on Katina, who has performed burlesque locally since 2015, with a brief hiatus for travel between 2019-2022. We are close friends, and we have been making photographs together since 2016. With Katina and David now living in Chicago again, we’ve returned full force to what we know and love. Collaborating with Katina means she often contributes ideas for images she’d like to make with me. Sometimes she’ll suggest a photo of her with a certain important person or in an important place. Sometimes she’ll suggest recreating a charged scene from her past or communicating ideas she has about her body, sexuality, and agency over both as a performer, wife, daughter, friend, and woman in a society that continually makes it difficult to confidently and safely navigate and exist. Katina also writes about memories and feelings inspired by our conversations together, which I then craft into pieces for display with the photographs we make.

Last year, I took an elective in the Photography department, The Documentary Book, with Professor Paul D’Amato. Paul had worked with me the previous semester as one of my Seminar (critique) teachers, and I felt an immediate sense of rapport with him as an educator and mentor. I went into the class with the sole ambition of producing my own handmade book, but I wasn’t considering my work alongside a traditional documentary practice, and I didn’t exactly know what it meant to be making “documentary” images.

Paul encouraged me to use the class as an opportunity to make new work in a new trajectory rather than try to piece together parts of work I had made the previous semester. I settled on an idea I had been thinking about a long time: following one subject long-term and making work solely about that one subject’s life. The result was a book about my friend and fellow sex worker, Secret Mermaid, that I successfully presented in last year’s final review. Not only was I proud of  producing my very own book and learning an entirely new skill, but I was most proud of making an abundance of images of one person’s life in a relatively short amount of time. The response to the work in final review was that the viewers felt they were able to get to know Secret: to see multiple sides of her life beyond her work in the sex industry, and to witness her in the many roles femmes often assume in addition to their vocations, resulting in an exciting and open conversation about sex work and workers.

Since returning from the Stuart Abelson Graduate Research Fellowship in Spain last summer, I have devoted my practice to exploring my relationship with Katina and to revealing the many parts of her life. While in Michigan for Thanksgiving, Katina and I set out to “fill in the coloring book” of our overall work together and accomplish several images. To communicate the impact of upbringing and place, we created images of her with her parents and in and around her childhood home, (which sits next to her grandmother’s home, surrounded by tall, wispy trees).  The following Thursday in Seminar, I presented a smallish edit of 25 images from that holiday weekend.

The selected images in this blog were made between early Thursday morning, on the road to Michigan, and Sunday evening, when we returned to the city for school and work. 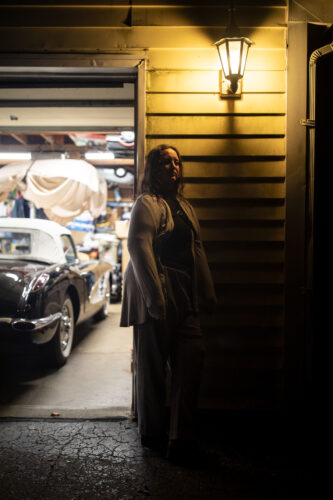 outside her uncle’s garage mother and daughter in the blaze of afternoon a wall of family photos at Katina’s grandmother’s house Katina and David on a date seven years ago