This week I want to shed some light on a day in the life of the Arthaus student. But first: some background and context.

Arthaus, as I mentioned in my previous post, is an intensive performing arts school based in Berlin, Germany. The school takes students from all over the word and holds multiple degree and certificate programs for theater making and performance. The MFA of Acting and Contemporary Performance Making cohort from Columbia joins this school in the second year of the program and meets other MFA candidates from Rose-Bruford College in London, England. This year, our collective cohort of twelve is represented by individuals from seven different countries with different artistic backgrounds and interests.

In our first semester, we go through two intensives led by different facilitators, two modules within each of those intensives, additional praxis and festival-process classes, and an end-of-term research project. All of this happens within a six-day class week. That’s right: we meet for classes 3pm to 9pm, Monday through Saturday, every week. It is a lot, to say the least, but this training requires it.

Currently we are nearing the end of our last two modules of the term: The Buffon and Cabaret Noir. These two modules work with distortions of form, desire, and even drag as a high and complex mask to tell stories or point to social and political issues. We can go more into the details of Buffon at a later date, but the work of the Cabaret Noir has been the most resonant module in this first term for me so far. Led by our facilitator Michelle Madsen, we tackle desires, cabaret as a form, and the embodiment of archetypes. One project we were assigned recently was based on the concept of happenings. A happening, as I understand it, is a type of performance art event that takes place in a singular moment in a public space. Michelle split us into groups and told us to go out in public and make a happening based on our desires. 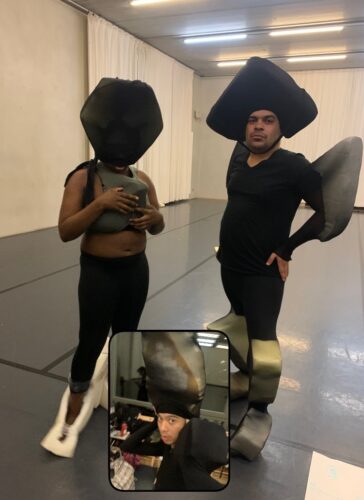 My group decided our desire was to disrupt the rhythm of a mundane public space. We headed down to Alexanderplatz in the district of Mitte to hold our happening. Alexanderplatz is akin to Times Square in New York City or the Riverwalk in Chicago, in that it is a hub of tourist attractions, major shopping centers, and public transit transfers. Among the hustle and bustle of this city center, we decided to hold an impromptu pillow fight. We gathered pillows from home and met underneath the TV Tower of Berlin, and stood in stillness looking into each others eyes with the intensity of the famous stare-down scene from The Good, The Bad, and the Ugly. We then erupted into five brief minutes of cushioned brawl in front of unsuspecting cafe-goers, shoppers, and other city folk, whose reactions ranged from ignoring the scene to fully being invested and recording with their phone cameras. The space resumed its natural rhythm as we abruptly left to reconvene and reflect on the happening. What was so interesting was how much changed about this large communal space and the people in it. Some were laughing and enjoying themselves, and some carried on with their day, but all experienced a random and brief moment of fun and play. We filled the space with joy and hopefully gave some people something to talk about. 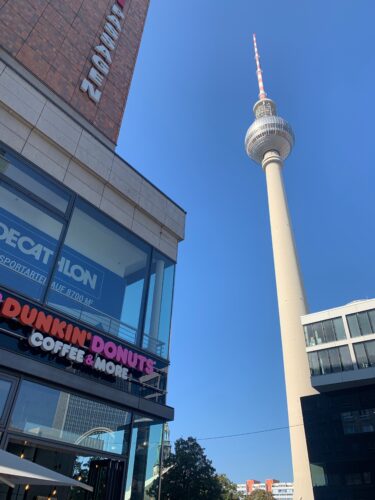 View of the TV Tower from Alexanderplatz aka: The Pillow Battlefield

If you were wondering what an example of the work we do at Arthaus Berlin looks like, this project and experience is exactly it. It is spontaneous, fun, challenging, and even a bit risky. I am really loving the training here in Berlin, and I cannot wait to learn more and share it.