In this semester as a 1st MFA Film Directing student, I was tasked with creating a five minute short film. I decided to go with an idea I wrote last summer. The scope of the project was slightly ambitious, but I was able to finish principal photography in early March. Through the first few weeks of the semester leading to the shoot was a strong test of my skills in collaboration and reaching out for help. 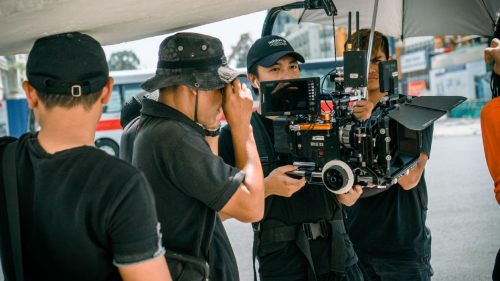 Throughout the pre-production, I had to learn a lot about permits and reserving campus spaces from the faculty. First, I needed a permit for the outside portion of my shoot. I tried to research online where to go for a city permit and how to go through the application. I was really struggling with figuring out the correct way to submit the application. However, a faculty member recommended that I reach out to the Chicago Film Office. When I called them, I wasn’t sure if they would be helpful, but the person I spoke to guided me through the whole process. They helped me fill out the paperwork as well as ask an Alderman to send out a film notice and allow us to reserve parking for the equipment. It was extremely helpful during the shoot to have that peace of mind.

Additionally, I struggled finding a space on campus that could accommodate my cast for a rehearsal. One of my actors wasn’t affiliated with Columbia, so it was hard to get approval for them to enter. However after weeks of being turned down, a faculty member, Joan McGrath, helped me get easy approval for the rehearsal. This was amazing as it allowed me to comfortably work with my actors in rehearsal. While I could’ve resolved these issues by myself, it was after reaching out that I found the best help and knowledge for the future.

In addition to learning the benefit of reaching out, I learned about collaboration with other students. While these projects were written and directed by us, I saw that the director isn’t the only creative involved in the process. Working with talented actors, cinematographers and other filmmakers brings a lot of creativity to the project that I think should be included. I saw that asking these essential roles about their creative input gave me ideas and perspectives that I didn’t have before. I think directors who are demanding about being the only creative voice are not the best for  projects. I think my project is stronger than it was because I got some creative input from other roles.