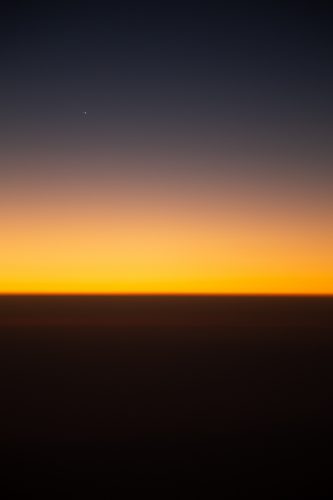 I remember the title of Jenny Boully’s oeuvre The Book of Beginnings and Endings. I was her student for a few classes during my MFA at Columbia. I remember a friend gifting me this book and talking about its experimental approach. When I think of beginnings and endings, I usually envision a “Fade to Black”, “An Indent”, “A Decrescendo.” I am still trying to unravel the title of this book.

If you take point A as the inception and point B as the conclusion, and you draw a line that starts from A and goes all the way to B, you realize that this is not the most accurate representation of time as you divide it into events, people, and significant places you’ve been to. It is a clear logical conclusion that these points need each other to exist, they balance each other out. A beginning presupposes an ending and vice versa. I have thought of clear ways to represent these ideas and my career as an MFA student seems like a fitting example.

I’m an inexperienced writer and I just got admitted into the Nonfiction Creative Writing MFA at Columbia College Chicago. I had submitted a very weak writing sample. Of course, at the time I thought I was writing something great, something worthwhile. I truly believed in my writing. Maybe that’s why I was admitted? I was a piece of moldable clay? I showed promise? I don’t really know.

To be honest, when I look back at the writing sample I submitted for Graduate School, I realize that I knew so little about Nonfiction and all its moving parts. My piece reads like a collection of melodramatic drivel. I worked really hard to hide my incompetence with big fancy words but you cannot conceal a complete absence of taste. The book related complex relationship issues in an attempt to understand how the conception of love is subjective and unique to each individual and the relationships they find themselves in.

I’m kidding, it was just me writing about my broken heart and working really hard to sound pitiful and lost.

It was a start though, a beginning. These were my earliest inquiries into the uses of Nonfiction. Questioning love, sexuality and hallucinogens. My chapters had the words “Daze” instead of “Days”.

How cliché… I cringe at the thought that I used to write pieces like this. It was clear that I was out of place when I sat in small classrooms surrounded by fellow writers who had long since started their inquiries into Nonfiction as a creative form of writing.

Some of their words were big and fancy but they were in the right place. They were not attempting to hide their incompetence by using big words. They had semantic motifs which aided the movement and the rhythm of the piece. At the time I had not even thought of movement and rhythm as concepts applicable to writing, I assumed they only belonged to the realm of music.

Throughout my various workshop, I had one recurring question:

Am I in the right place?

At the beginning, I thought Nonfiction was a look into the personal and maybe a gaze into the lives of those who would allow you to gaze into their lives.

What emphasized my feeling of foreignness (besides the fact that I am an immigrant) was the fact that I offended people with my writing. In one of my early MFA essays, I wrote the imagined scene of a suicide and reduced a stranger’s last moments to a collection of harmful stereotypes. I doubt that I would need to explain why that would be incredibly offensive. I know I must keep learning and I know that ignorance is not the biggest problem. In fact, it is good to be aware that knowing everything is impossible. Ignorance is the beginning of the learning process. I have not written similar essays since then. But it is true that I am still ignorant, learning, and beginning anew every time I encounter stories that exist outside of my immediate experience.