My roommate/best friend recently downloaded Bumble BFF in hopes of finding a new friend. At first, I was confused and a little jealous. I angrily thought, “Aren’t I enough?” when she showed me her matches with cool, new prospective friends. Then I realized my roommate and I had hung out almost exclusively with each other for an entire year, and then it made sense to me. Of course she wants new friends—being around the same 5 people for the past 365 days has been exhausting. Neither of us are essential workers, and we both sit at a computer all day.

To be honest, sometimes we run out of things to talk about, let alone things to do.

I have slightly more socialization than her, since I’m in school and see my Civic Media cohort three times a week, albeit via Zoom. Being in grad school has introduced me to so many amazing people; I would even go as far to call my cohort my friends, which is wild considering I’ve only met one in person. My definition of friend has definitely expanded while the people I see with any frequency has shrunk monumentally. 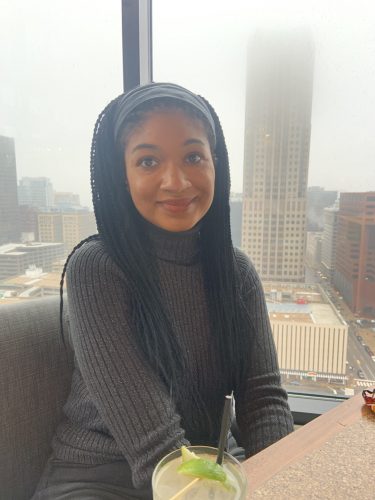 Me, at a bar for the first time in a long time.

Still, I miss being able to hang out with groups of people in cramped bars without the fear of contracting or transmitting a virus. However, that hasn’t been a reality for me in over a year. I’m a bit nervous for things to go back to “normal”, and I’m not alone.

The American Psychological Association recently polled participants, asking how nervous people are for reopening. They found that nearly half of all participants polled are anxious about adjusting to in-person interaction. While social interaction has never been difficult for me, I’ve grown accustomed to having class conversations in a virtual setting. Grad school, to me, has only existed on a screen with only a handful of opportunities to be on campus.

According to the survey, 47 percent of people felt an increase in stress during the pandemic, 43 percent didn’t feel a difference in stress, and 7 percent said the amount of stress in their life has decreased.

I’d say I’m in the camp of those that feel more stress. Grad school and a pandemic will do that to a person.

A Stanford University study found that Zoom fatigue can be attributed to prolonged screen time, anxiety from watching yourself in that small corner of the screen, a lack of mobility, and working harder to read nonverbal cues.

I’ve gotten accustomed to living in a world where I interact with my friends almost entirely online. I’m worried I’ve lost a desire to go out as if I’m a middle-aged woman trapped in a 23-year-old’s body.

So, I’m making a new goal for myself to do something new and fun each week. Maybe that’s going on a walk in a different part of my neighborhood or going to view an exhibit—just something else to look forward to that’s not eating or Netflix.

Bumble BFF isn’t downloaded on my phone yet, but we’ll see what happens.

I’ll let you know how it goes.