Now that I’m over two-thirds of the way finished with my first semester of graduate school, I’ve been thinking a lot about what I’ve learned and accomplished since starting. I was worried that beginning my master’s degree in the middle of a global pandemic would prove more challenging than rewarding. It is challenging and even a bit frustrating for me that my peers and I are not getting the full experience past cohorts have had, but I’d argue that this hectic and unconventional learning experience has been the biggest relief and benefit for me during all of the issues surrounding and caused by COVID-19, social unrest, and the craziness of America’s current political system.

While I was quarantining with my mom in Wisconsin in the midst of the coronavirus’ first wave, I struggled quite a bit with what was happening, like most people, because there was no end in sight. I was counting down the days when our governor would tell us it would be okay to go hang out with friends and socialize normally again. Sometimes I would get outwardly grumpy and snap at my mom (not proud of it) or sulk in my room. Then the George Floyd protests began, and that brought on a different kind of anxiety. Now that Joe Biden is the president-elect, I thought we all could collectively exhale and be content with some good news, but then white nationalists decided to march in DC. The timeline of these events only took up a span of nine months: quarantine, protests, grad school, more protests, election, still grad school and protests again. 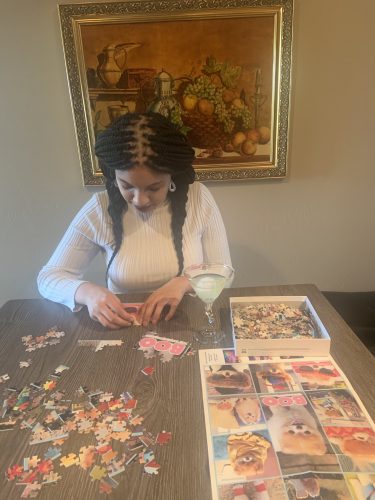 Where you could find me most of quarantine.

In retrospect, I realize the amount of stress and overall dread I was feeling has gone down significantly. I don’t think that that’s a result of getting used to the “new normal,” because I try not to get acclimated to uncomfortable situations. Rather, the growth I’ve experienced can be contributed to starting the Civic Media program. Not to sound overly cheesy, but there is something to say about the foundational work I’ve completed this semester. One of my classes, Collaborative Development, focuses heavily on understanding emotional intelligence. I spent weeks learning about empathy and self-awareness and self-regulation, and how those things all work in tandem to foster relationships with the people around you. Growing up, I heard the term “emotional intelligence” pretty often without much context. It made me realize that the foundational elements of socialization and teamwork, things that we’ve had to do since we were children, have never been formally presented to most people in a classroom setting, yet we’re expected to know how to properly work together. Similarly, I’m in a Nonviolent Communication course that has really opened my eyes to what it means to be an effective communicator in a work setting and in my interpersonal relationships. Sometimes when I look at the news, or even outside my door, I think about how much our society could benefit from hearing the things I hear in class weekly.

I’ve learned that listening is a skill. My boyfriend is the most grateful for this. Last week we had a small, heated argument, or what we call a “tiffy” that in the beginning of our relationship would probably last at least an hour and end in crying. Because of what I’ve learned in class, I decided to swap my need to argue and be “right” with empathy instead. Listening to my partner, telling him I hear what he’s saying then expressing how I feel didn’t take nearly as long or as much effort. Who knew!

While I feel a little strange saying this, I’ve gained a lot more than I’ve lost, given everything that’s happened. We’re still a long way from the end of fighting for social justice and equity, the pandemic doesn’t have a definitive end date nor will the consequences of it subside anytime soon, and Donald Trump is still in office. However, I can now say that I feel confident in my own abilities to get through distressing times in a way that elicits progress and self-growth so that I can be the best version of myself as I do what I’m most passionate about: connect with others and tell stories.