School during the time of COVID-19 has been a challenge for everyone, including the Music Composition for the Screen program here at Columbia. But as my undergraduate band director would say, “challenge is an opportunity for growth,” so we’re not going to let this stop us from becoming the best composers we can be.

One of the things I love about the program is that during our time here, we get a chance to work with three composers doing work in LA. This has been a challenge because usually the composer will get to come to Chicago and stay here for the 7 weeks of their residency, but because of the state of the world, we are meeting over Zoom instead. This has been both a blessing and curse. We are missing the live interaction of being around classmates and an instructor. On the other hand, working from home allows us to go deeper into the technology when we need to show something that pertains specifically to our setups. I mostly just miss being around my friends in the program, but that hasn’t stopped us from learning and creating great music!

For the first half of the semester, we’re working with our composer-in-residence, Heather McIntosh. She has made our time together incredible with her bright and cheery attitude and sense of humor. Heather has led a fascinating life up to becoming a media composer. After graduating from the University of Georgia, she played in several indie bands and with some of the biggest names in pop music from the late 90s and early 2000s such as Gnarls Barkley and Lil Wayne. Nowadays, she composes for a variety of films from dark films to documentaries.

With Heather, we’ve been working on scoring for documentaries and in period styles. What makes composing for documentary unique from composing for narrative-style film or television is that often times the music is there to set a mood and exist alongside wonderful stories and dialog without distracting from what is happening on screen. Along with this challenge of writing for a documentary, we’ve also had to pull musical elements from late 60’s and early 70’s pop, rock, and jazz styles to get the right vibe for the film. Writing in a period style has been a challenge for some because not everyone comes from that world, but we’ve all risen to occasion and great music has come from it! (Check out the playlist for some examples of our work.) I’ve really enjoyed the chance to step outside of my normal composer box and try new things.

When I first came to Columbia, I’d never had the chance to write jazz before even though I’ve always enjoyed playing and listening to it. Throughout my time here I’ve been experimenting with it and finding my voice in jazz, and this semester has really helped me with that. Something I’ve really appreciated about being here at Columbia is the freedom to experiment safely, and if something doesn’t work there’s no big consequences to it. Heather has been so encouraging and inviting when we try new things, and that has really helped me build my confidence in my jazz writing.

Even though we’re facing unprecedented times in our world, that shouldn’t stop us from becoming the best we can be at what we do. We have the option of hunkering down and hiding from the problem, or we can use this challenge to grow and become better than we were before. 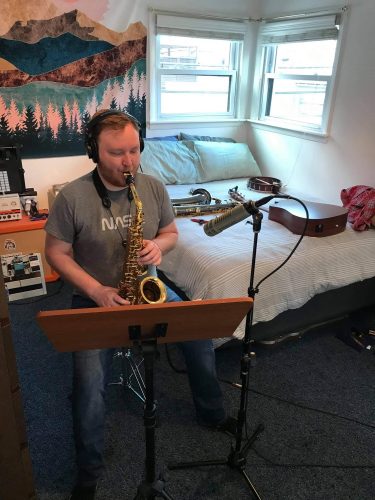 Letting it rip on the alto sax. Jack Druffel laying down some trombone. Brian Herald is the new student correspondent for the Music Composition for the Screen MFA program. He will blog about his experiences throughout the academic year.

Before coming to Columbia he graduated from the University of Louisville and was part of a service corps in New Orleans working in an adult education center. He is currently working on a short film with a Columbia alumnus.