January 28th, 2020 was officially my last “first day of day school” as it was the first class of my last semester in the poetry program. Leading up to the day, I felt a bit of excitement—I felt a moment of pride knowing that my work and dedication to my poetic craft was not too far from cultivating an accomplishment that appeared unattainable during my undergrad years: walking across the stage with a Master’s degree!

For many people, the idea of the first day of school can conjure up many emotions: a bit of stress, perhaps some nervousness, and even happiness. But what about when it is your last “first day of school?”  That moment tends to bring about a mixture of different emotion that go beyond entering the classroom. For me, that moment was a mix of everything I listed above: excitement, stress, nervousness, topped off with a pinch of melancholy.

Going back to that day though, my mood seemed to shift a bit once I entered Building 33. As I prepared for my first day of my Poetics course, I felt a little a bit of surrealness in the air—that moment of “this is really it” hit me with full force. At some point after hanging around in the English/Creative Writing Grad Student Lounge, saying “Hello!” and asking “How was your break?” I realized that this was the last time I would say those things to a certain number of other students in the program as we prepare to wrap up our coursework and move on to a new chapter in our lives. While the poetry program is only two years, it feels like I have known the people in my cohort longer that—heck, it is hard to believe that my first blog post was a year and a half ago!

But that wasn’t the only thing I was feeling in that moment. Let’s just say that a few discussions afterwards left me feeling a bit stressed and nervous (remind you, my first class has not started yet). It came from brief discussions about—you guessed it—the thesis! There’s no better way to forget about all that energy you stored up from a six-week semester break than getting Canvas notifications and emails from your thesis advisor asking to compile a statement and rough first draft, or a compilation of poems one imagines making up their thesis. 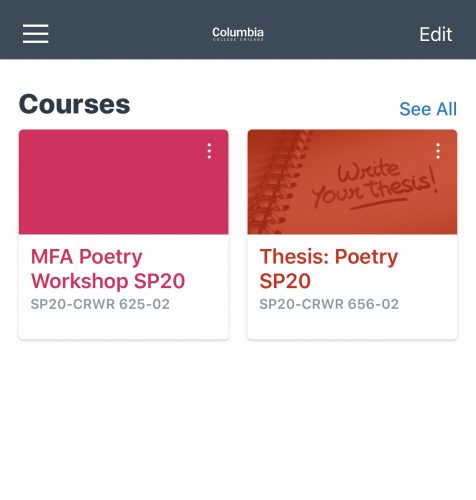 Whenever I see this, my heart beats a second faster.

Of course, during that moment of reading those Canvas updates and email, my mind fluttered as my body began to feel a bit overwhelmed—it was almost as if my mind forgot all the work that I have done and created over the last three semesters! That was until I came home, and took a look at my desk drawer, which is where I tend to place all my school work, from written poems, essays, to in-class handouts, and was able to relax. 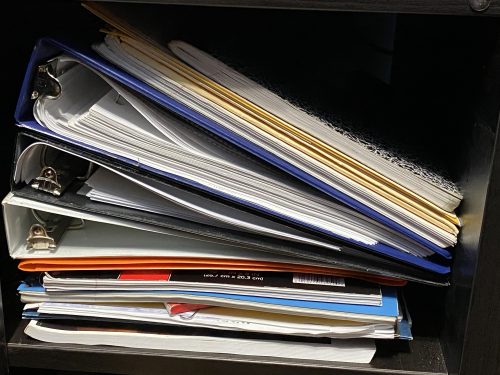 From filled up notebooks, to workshopped poems, to in-class handouts received.

Though this last semester is bound to bring moments of stress and anxiety, the one thing I will have to remember is to not lose sight of everything I have achieved over the past three semesters of grad school—that will be what gets me through my final semester, my thesis, and push on the stage on May 16th.