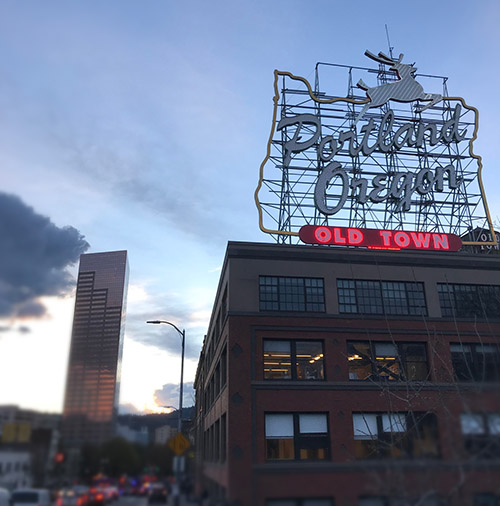 By a strange twist of fate, Portland, Oregon, and Portland, Maine, are on roughly the same latitude. A friend who has been to both Portlands mentioned that the vibe, all progressive and inked-up, is also very similar in each city. How, then, is a simple lay-person such as myself to ascertain the difference? Well, I can tell you that I sure knew I was in Portland, Oregon, in late March of this year by the swarm of people with glasses wearing teal lanyards walking around like zombies.

But these zombies read books—lots and lots of books! They are the attendees and presenters of the annual Association of Writers and Writing Programs (AWP) conference. The colossal event was held this year just off the banks of the Willamette River in sunny/rainy warm/cool Portland, Oregon. Myself and a chock-full of many other Columbia College Chicago (CCC) students and faculty were among the maddening crowd.

You ought to go to AWP at least once during your graduate career. It’s fifty-bucks for students and you can, with some forethought, obtain up to $500 for expenses by applying to the Lynn Dym Rosenberg Professional Development Fund. Unless someone else is paying your way (rare for us students) you don’t stay at any of the hotels adjacent to these conferences. You can, as some of my colleagues did, pool together and rent an Airbnb apartment at a decent price. Or you can do like I did and rent a bed in a room with seven other people in a hostel for thirty-five thrifty bucks a night. It’s funny how the snoring synchronizes.

The conference has grown exponentially and turned into a behemoth over the years, but you can still curate your experience to attend a wide range of panels ranging from the business end of things (“Best of Luck Publishing This Elsewhere: Editors on Rejection”) to the craft (“What’s Missing: How Absence can Drive Narrative”) and everything in between.

Core Fiction and Nonfiction faculty member Patricia McNair conducted several panels, including “Going Global in Nationalist World: Writing & International Collaboration.” She told the plethora of CCC students in attendance which panels and booths to visit based on what she knows of our writing. Patty is one of the best when it comes to things like that!

“[It’s] a wonderful opportunity for emerging writers to see the best and brightest in publishing landscape,” Professor McNair mused.

Speaking of opportunity, second-year Nonfiction student Bekyy Khera was asked by Patty to participate on the “Going Global in Nationalist World” panel.  Since AWP is the conference for writers, I admit I was a little envious that Bekyy now has “Discussant at AWP” on her CV. But that jealousy quickly evaporates because I am so proud of her achievement and how it represents CCC as a whole. 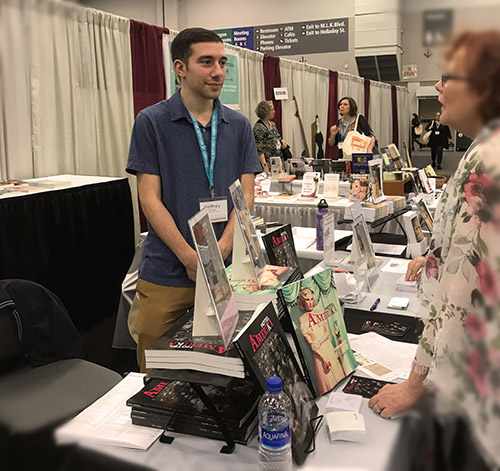 Jeffrey Barbieri is very sly when making a sale.

Jeffrey Barbieri, another second-year Nonfiction student, took some time out from all the sessions to tell passers-by in the book fair about Hotel Amerika, the literary magazine edited by CCC Nonfiction Professor David Lazar. Jeff convinced a few people to become patrons while I was there.

If you take anything away from this blog, it should be that opportunity is everywhere if you’ll just put down your phones.