It’s our first week back at school for our FINAL SEMESTER (whaaaaaaaat!?), and I’ve just returned from Berlin!

(Wait, I thought only the first year of the EDPP was in Berlin…did we travel back in time or something?)

Nope, no time traveling here, but if I figure that one out it will be in my next blog post.

After spending a week a half with my family in South Carolina over winter break, my cohort-member and partner Richie and I traveled to our city of yore to continue developing a project we started in our first year! We created a 15-minute version as part of our unit on quick-change and farce with our two LISPA/Arthaus-mates, Jelle (Belgium) and Irene (Basque Country). Our class received it really well, and we decided why not go ahead and start putting our European Devised Performance Practice MFA to…practice! When plane tickets were cheap in August, we went for it. Shortly after, we applied for and received a residency at Katapult, a fantastic theatre and circus training space.

When Richie and I arrived on December 31, it was a bizarre experience. Firstly because New Year’s Eve in Berlin is completely bonkers, and secondly because it felt like homecoming just a bit. I hadn’t realized it, but there were many things about the city that I missed. I had missed the bluntness of the people, the efficiency of public transit and grocery stores, the wildness of the parks, and the price of Ritter Sport chocolate. *drool* I had also missed hearing a language around me that wasn’t English. (My German phrases did come back pretty quickly, in case you were wondering.) Unfortunately and fortunately, we didn’t get to experience the city much because we were there to work.

In total, we spent five total days, seven hours per day, rehearsing and rebuilding the farce. At the end of the fifth day, we had a showing of our work-in-progress for a small audience and had a feedback session after. In our rehearsal period, we had two goals. We were looking to extend the show’s length as well as change it from a four-person show into a three-person show. Irene received an amazing offer to work in theatre in her home country and had decided to leave the project, a decision that we were saddened by but supported completely.

The first day rehearsing was slow-moving. Richie and I were jet-lagged, Jelle had a cold, and we couldn’t resist catching up with each other in the morning. It took a whole day to find our chemistry as an ensemble again, especially without Irene. We found that there was no way to replace the energy that had been made by her, but we managed to find our own rhythm. One challenge was that each of us now had to play three characters instead of two, but on the flip side, it was easier to play together and choreograph our sequences as a trio. We managed to do it, but the transition took a lot more time than we anticipated.

In the end, we made the piece seven minutes longer, and we received 35 minutes of feedback from the audience, most of which were LISPA students from our first year. The most touching moment I felt was halfway through the feedback session. When I looked around at the circle of familiar faces, each artist earnest and passionate about what they had to say, I was reminded that THIS was what brought us together. The 33 students at LISPA last year did not find their common ground through sports or drinking together, but through making and experiencing and analyzing physical theatre with each other. It was beautiful to come back together again, and I wish the other members of the Columbia cohort could have been there, too.

The day after the performance, Richie and I did get to socialize at brunch with our former classmates, and then we even joined a movement and voice class with our LISPA/Arthaus teacher, Cat! We strolled through the neighborhood we both used to live in and reminisced. It was cold, it smelled like kebab, and there was glass in the bike path. Just like it was.

Winter break is generally supposed to be about…well, taking a break. Richie and I definitely didn’t do that in the traditional, relaxing sense. What we did, though, is took a break from school and entered the real world for a bit. Looking back on it, it was such a relief to find that we can apply what we’ve learned this past year and a half to our professional development, and that it is totally possible to continue working with our international colleagues we’ve made. It will be tough – we are hoping to work on the project only two to three times per year. Our hope is in 2020 the show will be complete enough to do a summer tour! Many theatre artists that I know wouldn’t commit to a project for so long without guaranteed success, but our work is anything but traditional. There was a ten month gap between rehearsals, and we were able to add so much more knowledge than we had had before. The project still has legs, and as long as it has legs we plan to keep running with it.

And now…pictures from our farce, Le Taste of Jean-Pierre! 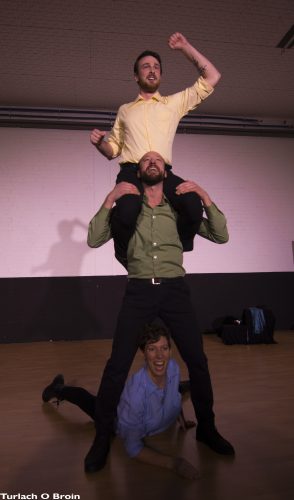 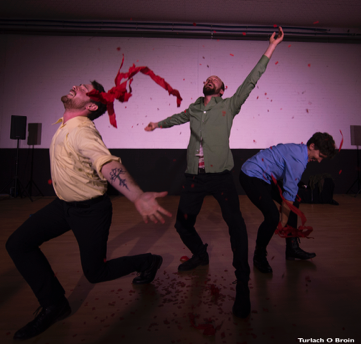 Believe me, this one is grosser than it looks. (Muahahahaha!)