This winter break I decided to forgo any J-term trips (namely the Rome International Exhibition Management J-term or the Miami Creative Industries J-term) in favor of staying home in Chicago to use the time to prepare for my upcoming curatorial debut for my show opening in the Hokin Gallery this spring. The show is named Fulfilled Fantasies: Contemporary Chicago Drag Works, and will feature six photographers, two video artists, and four costume designers.

One of the featured photographers is Alex Wallbaum, a Champaign, Ill. native who lives and works as a freelance photographer in Chicago. For the show, I wanted to curate a series of photos of Chicago area drag queen Honey Dijon, shot by Alex, as they worked together previously in Champaign to create this beautiful image:

For this shoot we wanted to focus on the humor of drag, particularly because Honey is known for her offbeat sense of humor in her performance. While I can’t show you the final images, I did want to relay a little bit about the process and some behind the scenes moments. Like this one, where I look like your quirky best friend from 90s cartoon: 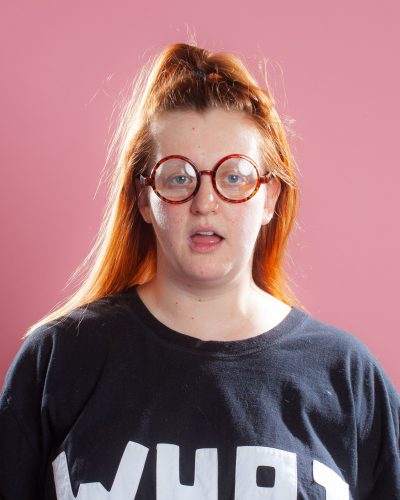 This is a test shot while Alex experimented with lighting and Honey touched up her nails and makeup.

Photoshoot production is one of my favorite aspects of working in drag—both as a drag queen myself but also as an arts manager and friend to drag queens. I wish I could lay out a play by play of how to Run the Perfect Photoshoot but I’ve found that it really boils down to the people involved and more specifically, who you know. I’ve done photoshoots where we had to scout locations, manage set design, and use a budget—I’ve also done photoshoots where all that was required was getting into the look and going to an apartment with a seamless backdrop.

For this one, we shot with minimal props at Alex’s studio in Humboldt Park. And I had major studio envy—the entire space was so cute and fresh, including a giant fake MacBook about the size of a coffee room table. The best part about this shoot was that we had compiled a small team. I was there basically for creative and set direction, Alex was the photographer, Honey was the model, a friend named Erick was glam squad (a.k.a. took care of hair and makeup touch-ups), and Alex’s partner Evan helped with lighting. Having that number of people was just right in this instance, and allowed me to concentrate more on the vision with Alex and also getting a couple of last minute props together.

I think because of the glamorization of modeling for magazines like Vogue, etc., it can seem pretty daunting to run a photoshoot or to be a model but the key is remembering that you only have to get a few key frames. Without having any real professional training in photography it has also somehow morphed into my favorite art form, and I think it’s purely because of the collaborative element. Alex’s work in particular is interesting because his eye for color and lighting are out of this world, but he also frequently collaborates with artists who bring just as much to the set as he does in order to make the image work. One of my goals for the Fulfilled Fantasies exhibition overall is to explore the relationship between the photographer and the subject, particularly when the subject is bringing as much talent to the table as a drag queen.

To round off this post, I’ll leave you with one semi-edited outtake from the shoot, featuring Honey: 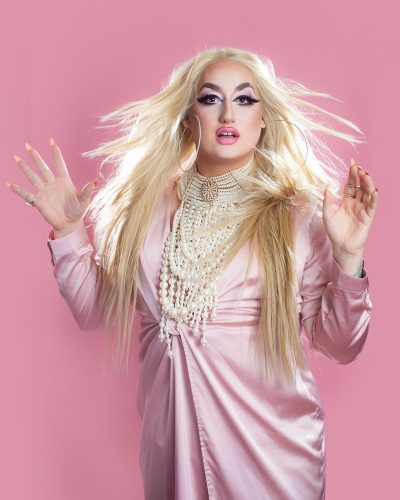 Honey Dijon feeling her glamour with a hair flip.