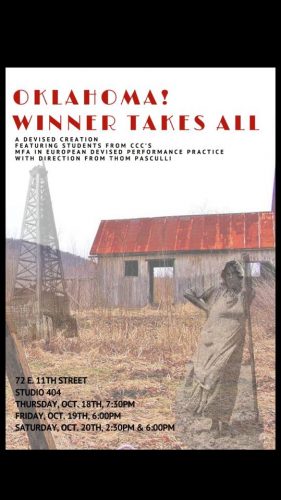 “The inaugural cohort of Columbia College Chicago’s European Devised Performance Practice MFA presents Oklahoma!: Winner Takes All. A radical departure from the Rogers and Hammerstein musical, this original performance piece weaves together a collage of new work created in response to nostalgia, desire, and the cost of victory. Facilitated by Thom Pasculli [from Walkabout Theatre] and co-created by the ten-person ensemble, the performance runs under an hour and is free to the public.”

We are thrilled to present our first piece, though the creation process has certainly had its challenges.

Traditionally, putting up a show would mean we would have arrived to day one of rehearsal with scripts in hand. After memorizing lines, researching text and character arcs, blocking scenes, creating dance and fight choreography, and discovering the play through scene work, we would have arrived to this day five weeks later with a polished show ready for an audience. Once the run is over, we would move on to the next show! CCC operates on this model.

In our devised process, however, these past five weeks have looked very different. At the second rehearsal, we decided we wanted to deconstruct the musical Oklahoma! and rebuild a new piece using the script, outside text, and personal inspirations. Outside of rehearsal, we individually collected and formed our material into scenes. In rehearsal, we worked with them, flipped them on their heads, and crashed them with other cast members’ material. Thom provoked us to create character arcs that combined characters from Oklahoma! with our personal impulses/interests/desires. We memorized text as soon as we proposed it so that we could play with different combinations. The text and actions are subject to change all the way through the last show, as long as it’s safe to do so. Now we are ready for an audience, but showing the piece is just the next step of a longer process. Devised pieces often continue developing (with multiple audience showings) over months or even years.

As an ensemble, we spent all last year devising theatre; the challenge comes with merging our process with an institution that is used to working traditionally. First, I can’t imagine how much of an adjustment it has been for the design team to work on a show that is changing drastically from day to day, especially for lights and sound. Marketing is another interesting facet. We didn’t know the title of our piece until two weeks before the show, so posters and promotional material were produced way later than usual. Our stage manager, Jess, has had to track all the script and scene changes AND all the logistical concerns and regular documentation that stage managers usually do (and she’s done a killer job of it, too). On top of that, we the cohort have faced the challenge of merging the vocabulary we learned at LISPA with Thom, who has his own aesthetic and way of working.

Being the first EDPP cohort means not only do we not know the answers to these questions, but we are often figuring out which questions to ask, such as:

How can a devised, original piece of theatre fit with the theatre season model to which most theatres in the US adhere? When/how can a production and design team be incorporated into the devising process? When devising with a director, who makes which decisions, and when do the roles shift?

My hope is that this experience (and the ones that follow in the year) will give future cohorts a base from which to deepen their research. Perhaps it will result in more specific questions. I’m certainly not saying that we are the only group of theatre practitioners that are asking these questions, but being in an academic setting gives us a safe space from which to ask. It’s an exciting and challenging place to be.

Of course, the process has been fun, too, and we have photos to prove it. 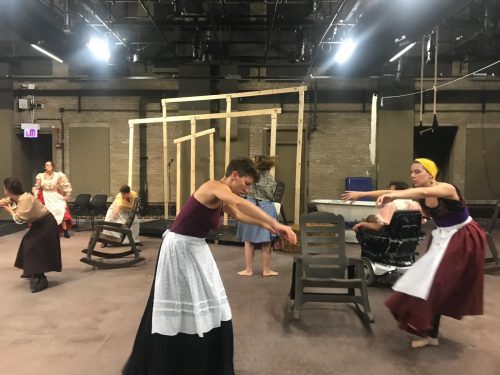 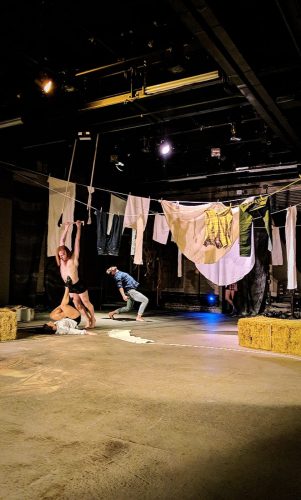 Our version of the Dream Ballet ft. Ben, Gab, and Chris (thank you, Raquel, for your trapeze!) Ashley, Gab, and Claire being tough At the end of a hard day, Fate and Ben love to relax in the tub…