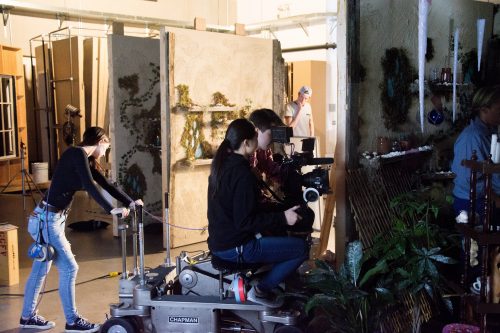 In The Witch’s Garden, set photo by Carlos Cerutti

This post is a continuation of my interview with good friend and fellow producer, Eva Herndon, regarding her reflections on the adaptation project along with what she looks forward to in year two of graduate school.

Can you talk about some takeaways from that adaptation project, and how you can apply them to projects in the future?

Eva: Nothing about the project or the process is going to make itself easy for you. There are a lot of things that if you neglect them become way bigger problems than they need to be. You’re going to find resistance, and things are going to make themselves more difficult than it seems like they need to be. The thing that got us through it was persistence. It’s not necessarily “not taking no for an answer”, but not assuming that every answer is a yes or no question. Find out who your allies are because there are a lot of allies on staff. It might just be because you’re not asking the right question at the right time, or to the right person. And so, not getting discouraged by that. One of the biggest things I learned was never put something off. If there’s any logical way that you can be like, I can do this now, then just do it now, and keep pushing. It’s like you’re constantly fighting inertia. The boulder does not want to move, and no amount of good humor and charm is going to make it want to move. You just have to push it.

Outside of the adaptation project, do you have any additional tips for prospective and current students?

Eva: I still feel like the biggest tip that I have is to forge personal relationships with faculty and staff because people always want to help the people that they know. There is a pretty knowledgeable group of folks on the faculty and staff. Same goes for if your DP has a relationship with the people working at the equipment check-out cage. Don’t be afraid to take advantage of that. Do the work to try to make it a better place too. Do it, and use the advantages that you have all at the same time. It’s possible. I just watched Mr. Smith Goes to Washington, which is actually kind of an interesting movie because it’s shamelessly patriotic and at the same time it’s pretty honest about the realities of the situation. There’s this moment in the middle where Mr. Smith, a total boy scout, says something to the corrupt politician like, “Are you really in this guy’s pocket?” And the politician is like, “Yeah, I am. I agreed to be a part of this corruption in order to accomplish the thousand honest things that I’m able to accomplish here.” It’s really depressing. I mean, it would be nice if we could do the honest things without doing that. And we should strive to make that possible, but at the same time we work within the system that exists.

I’m going to ask one more question as we wrap up this interview and head into our first semester of year two. Is there anything specific that you are looking forward to in our second year of graduate school?

Eva: Honestly I’m scared to death of year two. The reason I’m frightened about it, I think, is that when it’s over, I’m going to have to figure out what to do all over again. It was already a decision to come here in the first place. And the idea that I’m only one year away of having to make that decision all over again terrifies me. I’ve gained some experience. I’ve learned some things. But I’m not sure what tangibly is going to springboard me off from this year into some sort of glorious future. I don’t know. So, what I’m looking forward to this semester? There are a couple of projects that I feel enthusiastic about and some things I’m looking forward to watch and see come together. I think there are some professors who will have some great nuggets of wisdom to look forward to, and hopefully strengthening and deepening my relationship with the folks in the program whom I truly admire and enjoy their company. 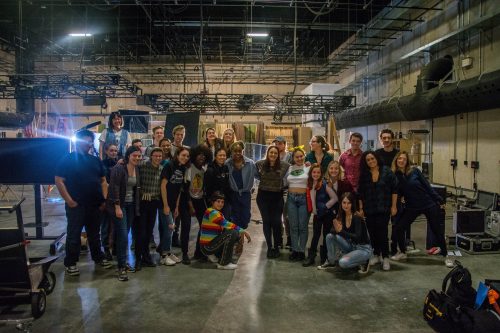 In The Witch’s Garden, Set Photo by Carlos Cerutti