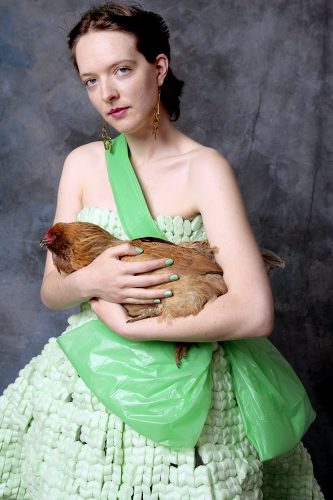 On a glorious summer day, I had the opportunity to sit down with my good friend and fellow producer, Eva Herndon, and talk about her experience in the MFA Creative Producing program.

Briefly talk about your background: where you’re from, and do you have a production background?

Eva: I’m from Berkeley, California and I did my undergraduate degree in Wisconsin. Prior to going to college I didn’t do anything in production or creative/artsy. I started working in the costume shop in college which was my first entry into production things, even though it’s much more of a theater capacity. My actual bachelor’s degree is in public health with a focus on health policy and domestic health insurance systems. So, I know about that.

For those who are applying to this program, and they have their undergraduate degree in something very different from film, do you have any encouraging words for those prospective students?

Eva: One of the things I liked about Columbia and the program here was that they were actively pursuing and encouraging people with different degrees to apply to the program because they felt like it created a more well-rounded classroom experience for students. That was one of the reasons that I chose Columbia, because I was like, hey, they’re looking for people like me, and I do think that there is a benefit to not just having a film background. They recognize that, which is great.

Do you feel like you adapted quickly to film school and learned about production fairly quickly?

Eva: Because I worked in theater for four years inbetween undergrad and applying here, I got a taste of what production is like in terms of what it takes to put on the physical side of things and some of the vocabulary. That definitely made it easier to transition into film school. In terms of the other things that are much more film specific, there was a learning curve for sure, but I didn’t necessarily feel strongly at a disadvantage for not having a film school background. Compared to some of the kids who who did come in with film undergrads, it felt like they were ahead for a little while but at a certain point we all just leveled out, and it really wasn’t that big of a deal.

Getting more into what we do in this program, which classes prepared you for the adaptation project, and what was that process like for you?

Eva: The adaptation for me did start during the first semester, where it was intended to start, which was the acquisitions, development, and presentation class. I was working with a story that I really liked, which I was not able to get the rights to, and because I wasn’t able to get the rights, it became a challenge of how to make it an “inspired by” piece instead of an adaptation. That involved working with my writer at the time to craft a new story based on some of the themes that felt important and interesting from the original story, which is a really interesting exercise to draw out, what you think is important and what is meaningful and translate something that might work very well on paper into something that will work on film. You sort of get to a point where you wonder if any adaptation is really an adaptation based on how different things inevitably have to become in order to retain the meaning, the kernel, of what you’re trying to communicate.

Eva: Yeah. And what are you trying to be faithful to? Are you trying to be faithful to the characters and the plotline, or are you trying to be faithful to the meaning of the theme, which is where things can get really different, or where a movie can get really bad because you’re trying so hard to remain faithful to plot and characters, that it loses all sense of its own integrity. It was a really interesting process in that first class. Then things got carried into the second semester without a home. In spite of it not having a classroom home in the second semester, it definitely had parents. There were professors who were guiding the process along even if it wasn’t structured into the curriculum. I think one of the best things to do is to seek those teachers out and keep coming back, because they will give if you ask. And I got lucky with having a director who was similarly interested in making it happen. With a little bit of forward thinking and good people on board, we managed to pull the whole thing together. (To be continued…)

(Read the rest of this interview on my next blog post!) 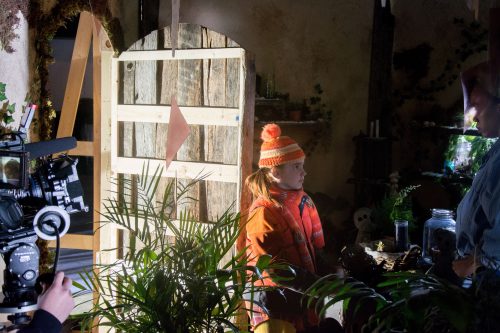 In The Witch’s Garden, Produced by Eva Herndon, Set Photo by Carlos Cerutti