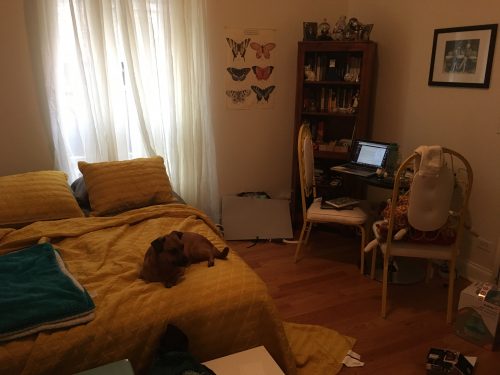 Still a work in progress, but it’s mine. (Complete with my roommate’s doggo, Romeo.)

One of the strongest experiences I think a person can have after having been abroad is coming back to their home country. Culture-shock is a thing, no doubt, but I think adjusting to foreign customs is expected. What I didn’t expect was having to readjust to what was once familiar territory.

Half of the EDPP cohort is new to Chicago this year, but I am part of the half that called this city home before going to Berlin. Even so, everything changes so much in a year. One of my biggest fears of leaving was that Chicago—the city as well as the theatre community—would have moved on without me in a year’s time. Even worse, what if my Berlin experience was some sort of gap in time in which I came back, unchanged, to a city that didn’t recognize me anymore?

If I’m honest, there’s a part of me that’s thankful for the second year taking place in Chicago for that reason. I’m glad that I will get to continue my journey here because it will make my experience undeniably real. However, there is truth to the fear. Life continued to happen while I was away. Some of my readjustments are personal, while some are cultural. Sometimes I can’t tell the category to which they belong, for example:

On the other side of that coin, I’ve been doing a lot of listening. I realized that it’s rare to have a person in your life go away for a year, and I imagine it must be nice to be able to unpack everything on that person when they’ve returned. They’re familiar with your life but can offer an eager ear or a new perspective.

Adult beverages are INCREDIBLY expensive, as is the food in any restaurant.

The amount of garbage here is insane. As hard as it was adjusting to the intense recycling system in Berlin, I wish it were here now, especially where my family lives in South Carolina.

WHY DO I OWN SO MANY CLOTHES!?

What has changed perhaps the most, though, is my desire to create a home for myself. Due to various reasons, I lived in four different places in Berlin, and I went through a few significant life changes while there. Prior to that, in Chicago, I packed most of my time with socializing, producing, rehearsing, performing, watching shows, and working up to three jobs. Rarely did I prioritize alone time. Rarely did I prioritize creating a space in which I would want to spend my time because I never wanted to be home. Now, however, it’s all I want to do. I can feel the pace of Chicago and my old time-filling habits tugging at me, but my first year of grad school showed me how important it is to let my own voice guide me, rather than follow the often louder ones that tell me what I should do. Right now, that voice is telling me to make my external home, a place where I can recenter, reflect, and find quiet when I need it.

A lot of my cohort members are feeling similarly, and it has been a great comfort to connect with them about it. Coincidentally, my fellow cohort member Richie found this passage in Terry Pratchett’s DiscWorld series which speaks to it rather perfectly:

“‘I said I’m going home,’ repeated Twoflower, making polite little attempts to shake off the librarian, who was trying to pick lice off him.

‘Home home. My home. Where I live,’ Twoflower explained sheepishly. ‘Back across the sea. You know. Where I came from…’

There was a pause. Then Twoflower said, ‘You see, last night it occurred to me. I thought, well, the thing is, all this travelling and seeing things is fine but there’s also a lot of fun to be had from having been. You know, sticking all your pictures in a book and remembering things…The important thing about having lots of things to remember is that you’ve got to go somewhere afterwards where you can remember them, you see? You’ve got to stop. You haven’t really been anywhere until you’ve got back home. I think that’s what I mean.’”