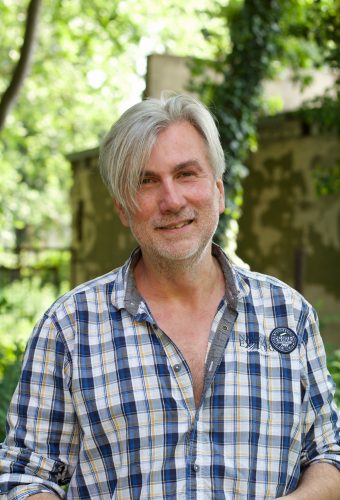 For my final blog entry in LISPA/my first year at Columbia, I interviewed LISPA’s Founder and Director, Thomas Prattki.

Before creating LISPA (the name of which will change to Arthaus Berlin next season), he performed, directed, and taught around the world and also served as Director of L’École Internationale de Théâtre Jacques Lecoq in Paris, much of where his pedagogy for LISPA stemmed. For those who don’t know him, he carries a calm energy, has an easy laugh, and he’s great to grab a coffee with. I hope you enjoy reading it as much as I did conducting it.

Brittany: Why do you choose to use masks as a pedagogical tool instead of teaching technique? Why masks?

Thomas: I think there’s always a personal, private response and the more sophisticated justification in terms of pedagogy. I think when I was attracted to perform, I was also very aware that I was a big introvert, so the notion of being masked and not being seen was something that I very much appreciated. (laughs) So I had both. I had the pleasure of performing and at the same time had the pleasure of not being visible…

And then there’s this in-between space. I found that very interesting—that the mask, on one hand, opens a space very different to the experience that I have in my everyday life, and then, at the same time, it allows me to be also much more in contact with myself. I find that form a really interesting journey because I think it combines the two polarities that I consider for an artist really important. On one end, that you have to be really strongly rooted in an ego. You need to know what you want, and you need to be able to make decisions about your art…and I think it’s also very important that you as an artist are in contact with something that transcends yourself. I could say into the human condition at large. The mask is an invitation to play with everything, to embody everything, to oscillate so that I don’t get stuck in one part of this polarity, but that I’m constantly in-between. To be an artist is to be in-between. And probably also to be human means to be in-between. And that might be it for now (laughs).

Brittany: It’s a big question! Do you still perform?

Thomas: No, I do not. Some artists are capable to teach and then they can direct and then they can perform and write and all these things. I have great admiration for those artists. I think I, in that respect, am simpler, and I can also say that I wanted to find the world in one drop of water. So the moment when I stopped performing, I started directing, then I stopped directing and I started to teach. In all of them I found very, very rich and beautiful things and also very rich and beautiful constraints because in none of those fields you can discover everything, but quite a lot.

Brittany: Do you ever miss it?

Thomas: Yes! I have moments. I think I miss directing more than performing. I think it was just my call to teach and with all the limitations I experience as a teacher, I am a much better teacher than I was a director, so it’s probably good for the community (laughs). And I know that’s very untypical as…I know that in the States, teachers who just teach… you just don’t do that, and I think there’s just something wonderful about it. To also have one foot in the profession, and I think that for me it’s very important to have a team, and to have a group of practitioners on the team who cover areas that I do not cover any longer.

Brittany: I really enjoyed what you said when someone asked about your pedagogy—I think it was, “How has your pedagogy changed?” You said the people. The people have changed. It’s not a stapled doctrine by any means.

Thomas: Yeah…and I say that with all due respect to Lecoq. Because he is one of my great reference points, and his pedagogy’s also looked upon as always something that he had created alone over a long period of time, and I think that all the practitioners and teachers that have been with him in his over 50 years of teaching have also contributed to what is considered right now “Lecoq pedagogy.” I would find that not fair to the team by saying “my school.” I mean, I started it, alright, but the pedagogy is really something that is created through the contributions of everybody and I enjoy that.

Brittany: Finally, what do you think that you’ve learned from us this year? This specific group of students.

Thomas: It has been a year sort of in the history of the school with lots of changes. And not all of them were easy. And I think it was extremely refreshing to have right now a group of students who were so fresh in many ways, and I think that the MFA group has contributed that to a large extent, because you are really pioneers, yeah? We celebrate next year our 15th anniversary, sort of 15 years of LISPA and the first year of Arthaus Berlin. To always to keep the pioneer spirit alive…that has been really wonderful.