The weather we have been waiting to see in Chicago is finally here. Although it disappoints us some days, it is generally warm outside. So, it means going out and discovering more of Chicago and the events happening in Chicago.

The summer has started and I finished my first year. The second semester was really challenging with all the productions. But I feel the honor of finishing the first year. I took one summer class which is called Screenwriting 2. Me and a couple more classmates are supposed to write a feature script this summer. It was something that I couldn’t do it before and I thought it would be a great idea to experience the process of writing a feature script. I have been working on it since the school ended. Meanwhile, I started house hunting. Although I liked my house I wanted to change it, because I feel like I have experienced enough of living by myself in a studio and I wanted to find a roommate to live with. It would not just be cheaper but also seeing someone at night when I go home is something that I am waiting for.

Since the summer is here in Chicago, there are so many events and festivals have been happening. First, I was at the Lincoln Park Greek Festival. It was a great opportunity to see more of Greek traditions. As a Turk, I know a little bit about Greeks and being in America and joining a Greek festival showed me more about their traditions and made me realize how actually similar our cultures are. 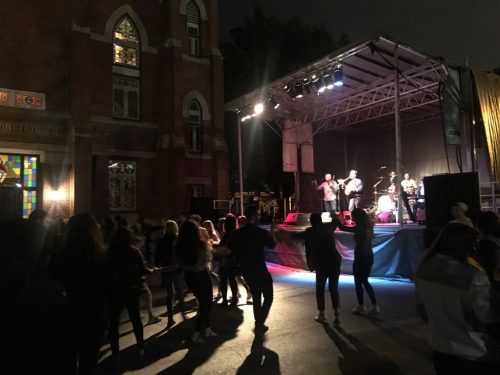 I have been resting since the summer started. Also, with the warm weather I have been able to go out and have a walk around. I discovered more about my area in the last two weeks. Not just the area that I live in, I was also able to spend time in the parks and take photos which I love to do. It makes me feel really happy. Being able to walk around and take photos was something I couldn’t do because I had no time to do that and also the weather. But lately I feel like I live in Chicago! A photo taken by me after a nice walk by the Chicago River. 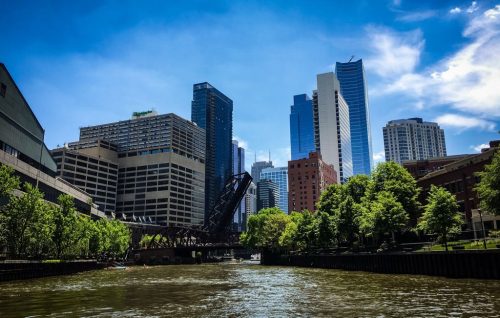 A photo of Chicago taken by me from a boat.

Chicago is one of the most important cities of the world. My friend from Creative Producing MFA program Urwa Zubair took part in an art exhibition about Pakistani artists. Me, Neva and Angel, who are my friends from Cinema Directing and Creative Producing programs, attended the exhibition together. Urwa showed some films and documentaries which was really interesting. There were a lot of poetry and paintings in the event too. I am happy that we were able to attend to the event. It was all the way up in Evanston and it’s good to have time to attend these events. Angel, Urwa, Neva and me (from left to right) at the exhibition.

Another great event that I was lucky to join was the famous Turkish historian Ilber Ortayli’s speech. I felt embarrassed because I never saw him in Turkey and now he was in Chicago I went to the speech. But at the same time it was a great honor to be there. Maybe it’s also because it’s been more than 10 months now that I haven’t been home and it’s almost the time that I need to go back to get some motivation, my own culture, and eat some homemade food.