“What would you risk for your art?”

This question followed us out of our small group discussion and into our monthly Cine-Club, where we watched Never Sorry, a documentary about political activist/artist Ai Wei Wei. The documentary shows the work of the controversial artist, his entanglements with the Chinese government, and his detaining by said government in 2011. We got to know Ai Wei Wei and his wry sense of humor, his mother and toddler-aged son, and his passion for revealing corruption in the world through his art. We saw the reason for why he was detained: his investigation into the number of deaths that resulted from poorly constructed government schools after a massive earthquake. We then faced a wonderfully irreverent, outspoken man who had been intimidated into silence after 80 days of imprisonment.

This documentary put the question directly in front of us: How far are you willing to go to put your message out into the world? Would you give up your home? Your place in society? What if you have a family? Would you risk their stability? Would you risk your life?

It is discussions like these that, shamefully, I rarely engaged with before this year. The idea of “getting political” in theatre evoked images of an actor preaching an overbearing message with which everyone in the audience already agrees. The more time I spend in Berlin, though, the more I understand that my work will make political or social statement whether I recognize it or not.

As a theatre creator, any work I produce will be filtered through my identity (both in heritage and experiences), and an audience will experience my work through the filter of their identities. Therefore, everything has an implication. Writing a protagonist as non-binary, female, or male is a statement. Casting (or not casting) a person of color is a statement. Targeting a white upper middle class audience for a comedy show is a statement, since this is the audience who will be filtering that comedy out into the world. In my time in Chicago, there were many companies and creators including myself that weren’t sensitive enough to ask what implications their work was putting out into the city, but being ignorant didn’t mean those actions weren’t having effects. My time in Berlin is teaching me that every detail of my work should be a choice. An audience will see every detail as purposeful, so why shouldn’t I?

There are many artists that already think about these details, but there are still so many who do not. If we as artists can understand what our work is giving back to the world, I think it will provoke more meaningful conversations amongst artists and audiences. If we dare to defend every detail of our work, then we might have the courage to perform it for people who may not agree with it. Think of how many more conversations we could have! Theatre, after all, is not a debate stage. It is a space for stories, for empathy. Now, I don’t believe that every artist is equipped to, nor needs to, put their lives on the line for their art. Every artist does have something they believe in, though, and with that comes a comfort zone. What if each artist found their own “front line” and went straight up to it with empathy and an open mind?

The week concluded with the Women’s March occurring around the globe, which felt like an appropriate way to end the week. The atmosphere, though, was radically different than last year’s giant march in Chicago. The numbers were much lower (being that it was a US-focused protest in a foreign country). Many non-Americans came out to march, too. It showed me how much one country’s elections affect the world, and unfortunately prejudice-filled political parties are gaining power worldwide. It was my first time being in a crowd with a sense of international solidarity and support. Lastly, the message was focused on action—to encourage US Democrats to vote while abroad. This is what struck me hardest. Like my country, I’ve stayed ignorant about important issues and made assumptions about the people that will be affected by my work, but now it’s time to learn from those mistakes. It is time for action.

I am so grateful for my experience in this program because my eyes are being opened to aspects of my life and work that I’ve never before considered. I am cultivating more sensitivity to my and others’ work. I am developing my own voice, and I am gaining the courage to agree and disagree with others. I am confronted every day with my own folly and ignorance as well as when I’m on a good path. It is painful, but through pain comes a reminder that I am a living, breathing, active being. Thank goodness for the ability to feel, to change. I admire the artists and activists (and “artivists”) in my country that have had answers to questions I’m just now learning to ask. Sometimes, I guess, it takes moving across the ocean for a year to see a little more clearly. 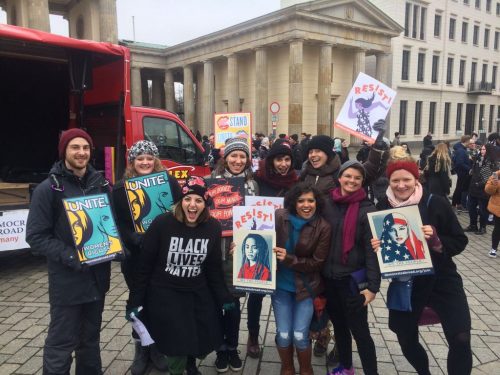