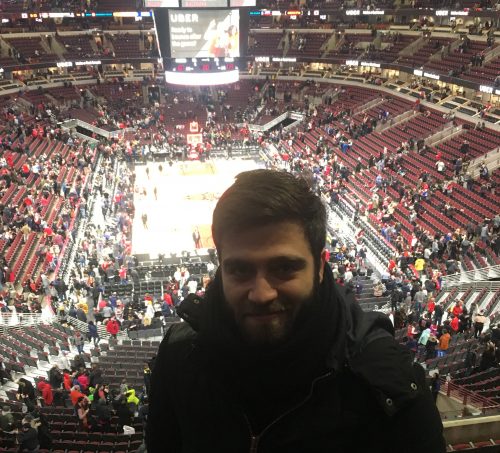 Me at the Chicago Bulls basketball match.

The first semester is over. After all these intense projects it was time for me to discover more of Chicago. Unfortunately, most of my friends left for the holiday but I had my brother visiting me for ten days.

My brother studies at Swarthmore College in Pennsylvania, and he decided to study abroad for a semester in France. Before he went there, he visited me here in Chicago. It was really good to spend time with him. It was also a great chance for me to see more things in Chicago. So, we decided make the most of it. We have been to Shedd Aquarium, National Hellenic Museum, Museum of Science and Industry, Christkindlmarket Chicago, ZooLights, Chicago Bulls basketball match and many more places. 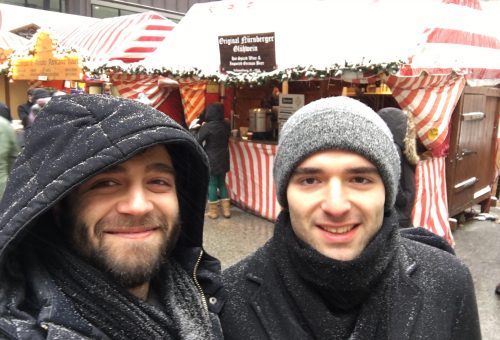 Me (on the left) and my brother (on the right) at the Christkindlmarket Chicago.

I have stayed in different countries than Turkey before but this is the first time that I am away from home more than 5 months. I knew holidays were going to make me sad and lonely but my brother accompanied me so it was good to meet with him after a year. Also, me and my girlfriend celebrated the New Year together in a really nice bar. Me and my girlfriend celebrating 2018.

The break was really needed. It is good to be away from the projects for some time and not think about them. Like everything, creativity needs a break too so when we return we will be stronger. Although that is the case, I was offered to be the 1st AD in an independent project, “Shaded Smiles,” that one of our Creative Producing students is producing. The story is about the roles of the black women in the society. We planned to have 2 days of test shoots and 4 days of actual shoot. I got involved the last week, so the process had to be real fast. But we finished the test shoots and one day of the actual shoots really well. I am enjoying the film so far. It is really helpful to be on another set also I am getting to know more people too. 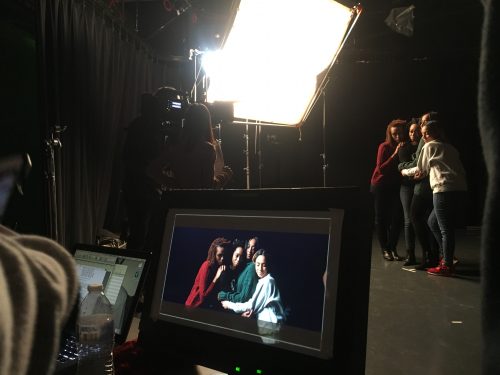 A scene from our project, “Shaded Smiles” which is shot in the TV Studio. Another scene from the test shoot of “Shaded Smiles”.

Besides “Shaded Smiles”, I have signed a contract with one of the Creative Producing students as a writer and I am working on that script which will be shot the next semester. For this project, I am just the writer. But if I get offered to be the director, I will be gladly shooting the film. And also, we were expected to send another script that we will be shooting the first month of the second semester. We sent our scripts to the professor of Directing for Drama class, David Tarleton. He gave his feedback on our scripts to develop more. My script is about paranoia and I believe that a lot of people can identify themselves with my protagonist.

The semester will be starting on the 22nd of January and I cannot wait to shoot 2 more films!